Going to the Movies with Jeff & Drew: “Power Rangers” 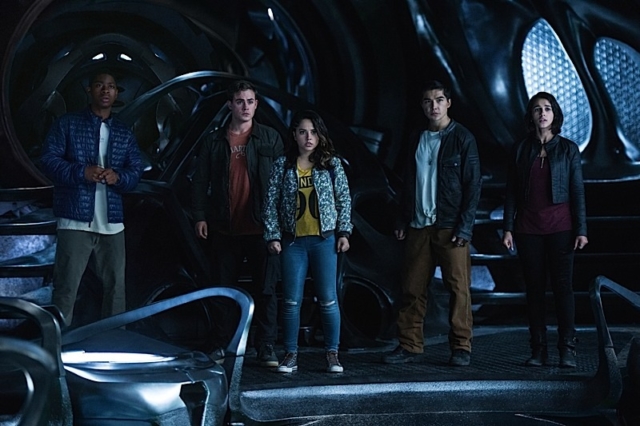 The Power Rangers universe is huge. The still-running television series kicked off in 1993 and spawned two feature films in the ’90s, comics, and lots and lots of toys. But throw out any thing you know when heading into this new film.

“The plot amounts to nothing but a dutiful linkage of the Power Rangers mythology. This poor attempt of an origin story of modern-day superheroes is exhaustingly familiar. In this case, the five teenagers, with attitude, get hit by a train, wake up with metallic coins in signature colors, and band together to explore their new powers, pilot animal-shaped vehicles and battle a green, staff-swinging, former ranger-turned-supervillain Rita Repulsa (Elizabeth Banks).” —Drew

“Most movies have one, sometimes two, moments where the heroes are down and out. Maybe one dies, there is a speech about how they need to work together to defeat the bad guys. This movie has at least five. It seems as if the five screenwriters each had their own idea for what this moment should be and no ideas for the rest of the movie. They spend so much unnecessary time building up who these people are and so little time having them actually do anything. This is yet another example of a studio attempting to set up a franchise and forgetting to make a movie that is worth seeing.” —Jeff 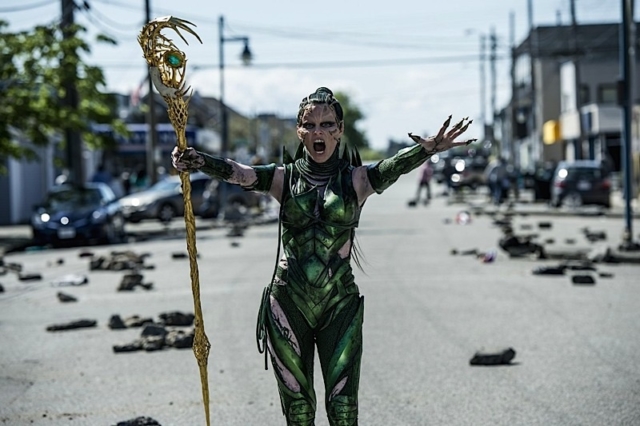 “Power Rangers is in no rush to get these teens into the colorful suits. It takes forever for them to make their way to some crashed spaceship that resembles the fortress of solitude. They are then welcomed and trained by an android named Alpha 5 (Bill Hader) and the giant disembodied head of Zordon (Bryan Cranston). Is it morphin’ time? NO!!! We don’t see them in their new armor until the last 20 minutes of the movie. And not until they learn to bond as a family unit and understand why they were chosen for the extraordinary task of protecting Earth. It’s so stupid, because we aren’t closer to answering that question by the end of the film than they were at the beginning. Their attempts at playful group chemistry are flat and forced.” —Drew

“One of the most absurd aspects of the movie is the music choices. They seem to have been chosen based on how popular they are and not how well they fit into what is happening. The worst example is during a way-too-long training montage where the kids learn how to suplex holograms set to Fitz and the Tantrums ‘HandClap.’ It was so jarring, I felt like walking out of the theater. Some fans will be happy that the ‘Go Go Power Rangers’ theme is in the movie, even if it is used incorrectly.” —Jeff

“As a fan of Power Rangers, this movie made me angry. It seemed like the powers that be didn’t know or care about why people like the Power Rangers. The main characters don’t yell out the name of their corresponding dinosaur before morphing. Forgotten are the unique weapons for each ranger. The cheesy comic relief Bulk and Skull are nowhere to be seen. The juice bar that doubles as a karate dojo is never mentioned. You could say those things don’t make the Power Rangers who they are. But this movie doesn’t service the fair-weather fans well. Is there an unintentionally hilarious crazy villain? Kind of. Is it awesome when you finally hear ‘It’s morphin’ time’? Not really. Are the fights worth the wait? Not even a little.” —Drew

“The only saving grace of the whole debacle of a film is that it is self-aware in how campy it is supposed to be. There are wisecracks and quips that generate a genuine laugh and fit with the tone the original shows set. The character that plays this the best is Rita, who is an over-the-top caricature of an alien bad guy. It was a welcome upgrade from the show’s Rita and was what the rest of the movie should have mirrored.” —Jeff

The Power Rangers reboot fails to tell any real story. There is very little fighting or action, and what little there is gets crammed into the final 10 minutes and lacks anything more than punching faces and shooting guns. This is one of the saddest attempts at capturing ’90s nostalgia to date.

Side note: If you are hearing that there is the first queer superhero in his movie, don’t get too excited. The moment is ambiguous and very small. Power Rangers skips any dramatic coming out moment and instead opts to be unclear as to not to offend anyone. The Yellow Ranger, Trini (Becky G) reveals that she doesn’t want her straight-laced family involved in her relationships. Another ranger asks “Boyfriend problems?” When she doesn’t answer, they ask “Girlfriend problems?” She responds that she never talks about her identity with anyone. The moment is short and glossed over.