Going to the Movies with Jeff & Drew: “Pirates of the Caribbean: Dead Men Tell No Tales” 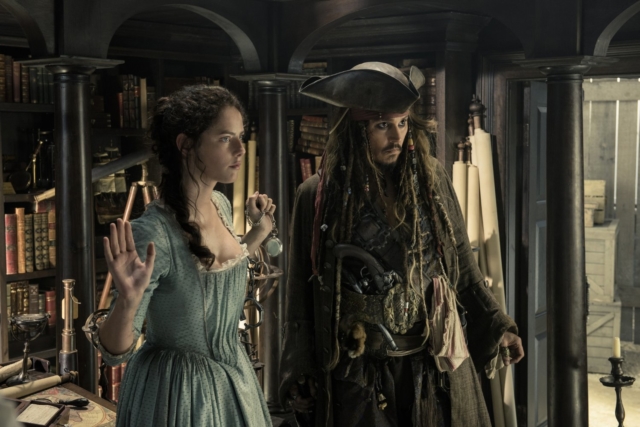 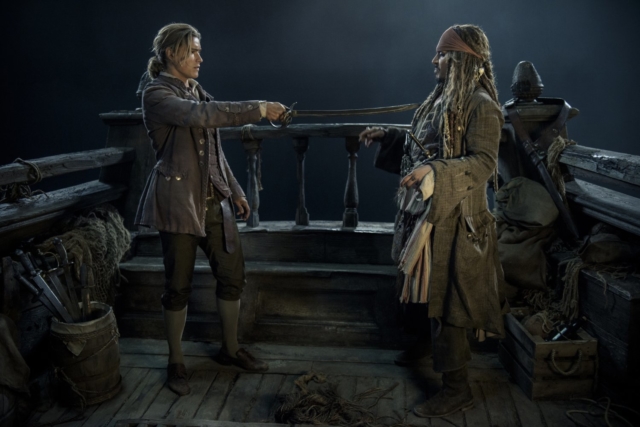 When the original Pirates of the Caribbean movie came out in 2003, no one had high expectations for a summer blockbuster-inspired by a theme park ride. But what a difference 14 years can make. The new film’s plot revolves around the search for the Trident of Poseidon, a mythical treasure that allows those who wield it to lift any and all seabound curses. With Will Turner (Orlando Bloom) still cursed to captain the Flying Dutchman for all eternity, his son Henry Turner (Brenton Thwaites) enlists the help of Captain Jack Sparrow (Johnny Depp) to help him find the Trident and save his father.

“In a cinema world of constant remakes and sequels, Dead Men Tell No Tales checks all the boxes of how to make a subpar movie. All the gags from past movies have been shoved into this movie, purely for the fact that someone thought they worked in past movies. But rarely does lightning strike the same place twice. The acting is so subpar that it feels like people showed up for a paycheck. Favorite characters are sullied by including them in this movie. We are even subjected to a CGI version of young Johnny Depp, which seems to be all the rage in movies, much to their detriment.” – Jeff

“Disney’s latest is no pleasure cruise Pirates of The Caribbean: Dead Men Tell No Tales is a two-hour movie that feels like five days. It constantly teases a treasure that is not worth the payoff. This movie feels like it’s just phoning in its greatest hits: Sparrow gets his Black Pearl, Sparrow stumbling drunk, Sparrow fetching comments about whorishness. Only this time you’ll feel like you’re drowning in unnecessary side-plot tangles that have no weight or purpose. Here’s hoping that this in the last installment of this franchise, because the colorful, characterized action of the previous films are long gone.” – Drew

“How many times can Jack Sparrow almost be hung at the gallows only to be saved at the last minute? Apparently one more. This tired trope really sets the tone for the whole movie. The character and his actions could be intercut with any of the other Pirates movies and they would fit right in, because we have seen it all before. We are once again subjected to his drunken ineptitude during an entirely too-long bank robbery that he somehow stumbles through unscathed. What once made the great Captain Jack Sparrow charming has now been so overused in every film that it has become downright boring. The whole movie, with all of its high-seas action, is so boring that even Sparrow himself falls asleep in the middle of the movie.” – Jeff

“Since Keira Knightley and Orlando Bloom have about ten minutes of screen time, Brenton Thwaite and Kaya Scodelario’s (who plays Carina) only job in the film is to fill the shoes of Will and Elizabeth Swann (Keira Knightley). Here is the problem: Brenton and Kaya have no chemistry, to the point that I wondered if they were even screen tested together. Brenton is such a bore and eats up so many scenes with nothing to do, I got the feeling his direction was ‘be like Will Turner but just not Will Turner.’ Kaya is good, but she has more of a fleshed-out character and has things to do. Even so, it seems the script isn’t entirely sure how to integrate her character.” – Drew

“In its attempt to be even more outlandish with its gags than the previous four movies, this latest installment forgot to insert a good story. There are several key plot points that are meant to drive the story but feel so half-baked and forced that they fail to make an impact. We are also subject to Jack Sparrow’s origin story that includes a CGI young Depp that just comes across as an unemotional drone. It feels as though this story point was added in just so they could include this new technology in the movie. The whole thing became a disordered mess of disjointed scenes.” – Jeff

“The meaninglessness of Dead Men Tell No Tales undercuts its emotional value. It has zero of the charm from any other movie in this series. Henry Turner and Carina are extremely hollow and, at this point, Jack Sparrow displays no joy, leaving us with no connection as we watch them run amok across the land and sea.” – Drew

Dead Men Tell No Tales will hopefully be the last of this franchise, as it has become stale and monotonous. Parts of the movie drag out needlessly while key plot points are glossed over as if they are afterthoughts. This movie has none of the charm with overly complicated gratuitous fanfare and CGI. It seems as though they have run out of new ideas.