Going to the Movies with Jeff & Drew: “Passengers” 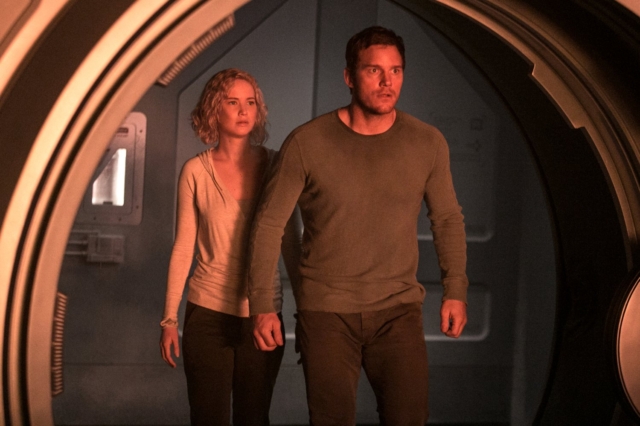 Traveling through space to colonize a new planet, Jim (Chris Pratt) and Aurora (Jennifer Lawrence) mysteriously awaken from suspended animation 90 years too early. They can’t go back to sleep, they can’t get help, and they are both going to die long before the ship reaches its destination. Threatened by the imminent collapse of the ship, they try to save the 5,000 other passengers on board, and discover the truth behind why they woke up.

“Passengers is the sci-fi movie that isn’t a sci-fi movie. It tries to do so much, but doesn’t get there. The plot moves forward, hitting beats by the number without actually going anywhere. At points, it tries to be a commentary on corporate greed and mass consumerism, but abandons it early. It tries to be a love story, but the relationship feels forced. The science used throughout is flimsy at best, but mostly it’s just bad. It doesn’t even try to stick to its own rules of fantasy or be grounded in reality. The whole movie just can’t make its mind up on what it wants to do, causing it to not do anything.” —Jeff

“In a word, Passengers for me is DISAPPOINTING. I feel most audiences are not going to be able to get past the controversial premise. Then again, people (like me) may be impressed that it tries to reach such a high goal, only to be let down as the plot starts to turn into the unknown. To be fair, not many studios would greenlight a movie like this with this scale and budget. It’s almost enough to look past the confusing and not satisfying ending, but not really. It’s just a squandered opportunity.” —Drew

“A big aspect of the movie is its undertones of a dark version of Sleeping Beauty. The main female character is named Aurora. She is awoken by a handsome man who brings her roses. The ship serves as the fire-breathing dragon to be conquered by ‘Prince’ Jim armed with an airlock door he uses as a fire shield. But this version is anything but romantic. Dark and questionable decisions bring up aspects of Stockholm syndrome.” —Jeff

“What’s really sad is I really like movies like this that use a single character on screen to captivate the audience. Movies with cleverly written dialogue and dynamic situations pull the audience in to hang on every word and action. Movies like Cast Away or 2001: A Space Odyssey. Passengers feels like it started as a thought-provoking sci-fi film then went into the Hollywood machine and came out the other side as an unimaginative space rom-com that has low stakes and infantile problem solving. The resolution of this story just plain sucks. It says more about the state of Hollywood storytelling than it serves as a proper conclusion of this film.” —Drew 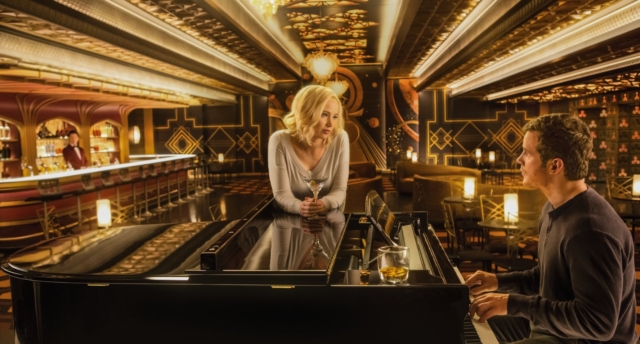 “Visually, the movie hits the mark. Stunning and vast landscapes of open space bring a sense of grand wonderment while underscoring the loneliness the characters are going through. The ship itself is a grand and new spectacle deserving to belong in the ranks of the most iconic space-going vessels in science fiction history. The grand sets also show how much space there is to inhabit. The design of the ship is meant to house more than 5,000 people, but it’s used by just two, showing how isolated the characters truly are.” —Jeff

“Hopefully, this is not the last time we see Lawrence and Pratt together on screen, because they have a great chemistry. Pratt’s goofy charm and Lawrence’s girl-next-door likeability have the ingredients for greatness; you’d think that would be enough to carry this movie. But, Passengers fails before it gets off the ground. All the pieces are set up in the first 25 or so minutes, and the story gets stuck in space with nowhere to go. Its dialogue fails miserably, and our lovable characters could have been given smarter lines other than obvious observations like, ‘Oh no! I woke up too soon!’” —Drew

This movie is a missed opportunity on so many levels. It has an unclear story, some questionable character development, and is wrapped in a universe that is constantly changing. Passengers has some good banter between Pratt and Lawrence and some great visuals, but not much else.