Going to the Movies with Jeff & Drew: “Neighbors 2: Sorority Rising” 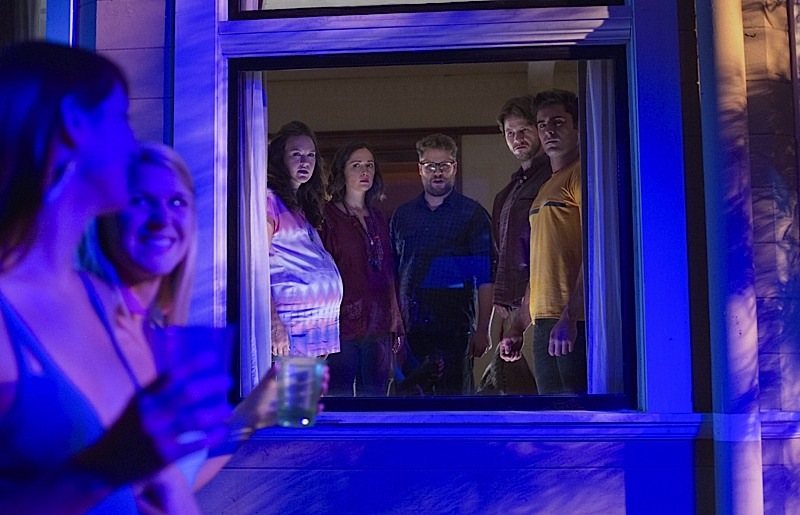 Because there were so many unanswered questions in the first one.

We all know why the 2014 Neighbors needed a sequel: because it cost $18 million to make and made $270 million at the box office alone. This comedy rehash doesn’t drift too far from the original. Instead of a frat next door, this time it’s a sorority … hell of a leap. Saying Neighbors 2 is a bad movie is giving it too much credit by calling it a movie. It has no plot, no story arch, and no character development. It is a vehicle for mindless slapstick and gross visuals with no payoff.

Mac (Seth Rogen) and Kelly Radner (Rose Byrne) are expecting their second child and preparing to sell their old house, which has a 30-day escrow. Meanwhile, Shelby (Chloë Grace Moretz) is upset that sororities can’t throw parties. After one frat kegger, she and her friends are disgusted and establish a new hard-partying sorority, Kappa Nu, which they conveniently move into the old frat house next to Mark and Kelly. To prevent the buyers from pulling out, Mac and Kelly are forced to reunite with Teddy (Zac Efron) to help battle the sorority sisters.

The story limps along with little cohesiveness from one scene to the next. To call it a movie is being generous, as it barely has a beginning, middle, and end. What comes between is a jumbled mess of sloppy slapstick gags and cheap laughs that fall flat. Amateur standup routines have better storylines than this sad attempt at film making. Characters are introduced and events happen that have no bearing on the rest of the picture. Some of them could have been used to the benefit of the story but are discarded. The only saving grace of the whole mess is that the jokes stop short of becoming offensive. The filmmakers seem like they are trying to make a women’s empowerment picture, but they neglect to learn what would actually empower. 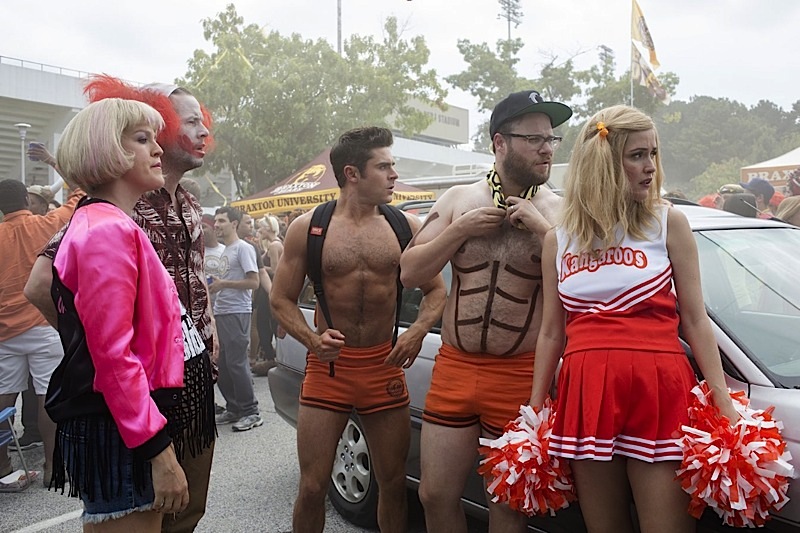 This movie tries to be progressive by throwing around the word sexist. All it does is point out the problems of sexism without coming close to trying to answer them. It relies too much on misguided world outlooks and heavy-handed lectures as motivating plot points. The dialogue between the sorority sisters about this subject is a joke. The film wants to get on a soapbox to shout about feminism and goes on ad nauseam about sexism, but then parades a half-naked Zack Efron around as a plot device.

“I wonder if the script was written by a bunch of drunk guys playing a writing exercise where one guy starts, passes it to the next guy, then he continues the story and so on and so forth. That would start to explain what happened here … sort of.” –Jeff

“This whole movie feels like a really bad SNL sketch. It’s all slapstick humor with no build up and very little pay off, if any. It doesn’t know how to end. If you told me that this movie was made on a bet, I would believe you.” –Drew

Dumb humor movies are by far some of the easiest movies to shoot. Light evenly, so you can see everything, and make sure your gags are on screen. This abomination can’t even do that. Dialogue scenes are so shaky at points that action movies would have reshot them. Party scenes are so poorly lit that they could have been shot with stand-ins, and no one would notice. Even the physical humor gags are so poorly executed that it takes a moment to realize what has happened, completely ruining the joke.

“It was as if a college film class was given a Hollywood budget to make a movie.” –Jeff

“For a movie that is only 92 minutes, it drags. It feels like I was in that theater for a day and a half.” –Drew

For having such funny acting power behind it, the movie fails to be so. Seth Rogan is the king of crude-humor movies, but the lazy writing and lack of story didn’t give him anything to work with. Even shoehorned cameos from Kelsey Grammer and Lisa Kudrow fail to elicit laughs. LL Cool J is credited in this movie and is in the trailer, yet for some reason doesn’t appear on screen. Not one character shows any growth or learns anything redeemable. It’s a bunch of idiots unnecessarily putting themselves in bad situations. Because the world of the movie fails to be established, all of the situations the characters find themselves in are not believable and are painful to watch.

“This train wreck is so hard to watch that what felt like several hours was, in fact, only 30 minutes. The guys at the end of A Clockwork Orange would think that it is cruel to subject someone to this garbage.” –Jeff

“This is by far my least favorite thing I’ve seen where Hannibal Buress plays a racist cop.” –Drew