Going to the Movies with Jeff & Drew: “Magnificent Seven” 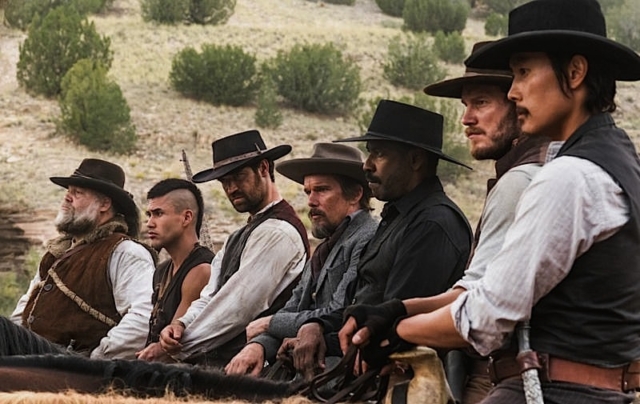 Large, sweeping pans of grand mountains, majestic forests, and calming river waters put you at ease. With a startling crash, you jump out of your seat, jolted by blast after blast of dynamite, followed by bullets, blood, and sorrow.

The Magnificent Seven is a new version of the 1960 western that was a spin on the 1954 Akira Kurosawa classic Seven Samurai. The film centers on the 1879 town of Rose Creek, where vicious, mine-owning land baron Bartholomew Bogue (Peter Sarsgaard) is intent on forcing out the townsfolk, gunning them down in cold blood and setting their church on fire. Desperate, but feisty, widow Emma (Haley Bennett) seeks out gun-for-hire Sam Chisolm (Denzel Washington), who puts together a posse of rogues to take on Bogue’s hired army of evil men. They are charming gambler Josh Faraday (Chris Pratt), sharpshooter Goodnight Robicheaux (Ethan Hawke) and his knife-wielding friend Billy Rocks (Byung-hun Lee), outlaw Vasquez (Manuel Garcia-Rulfo), Native warrior Red Harvest (Martin Sensmeier), and bear-like mountain man Jack Horne (Vincent D’Onofrio).

“The Magnificent Seven is everything a great western should be. It harkens back to the days of High Noon or A Fistful of Dollars. The extreme wide shots of open desert landscapes set the scene, the characters are gritty and flawed, the camera work shows us exactly what we need to see to tell the story, and the editing builds great tension in a satisfying way. We see plenty of close-up shots of hands on guns, squinting eyes staring each other down, and cowboys riding off on horses.” —Jeff

“When the original film came out, kids were either cowboys or spacemen. If this movie came out back then, everyone would have been a cowboy, because Denzel Washington just makes riding a horse look so cool. He looks born into the saddle, quickly established as a bad hombre bounty hunter. While Washington is solid as the lead character, Chris Pratt steals the show. That is saying something, because he is reprising the role made famous by Steve McQueen. Without Pratt, the movie could have become almost unwatchable. His humor is just right; sometimes it is over the top, like in one scene, he’s drunk for 10 seconds for no reason. But it doesn’t detract from his overall character.” —Drew 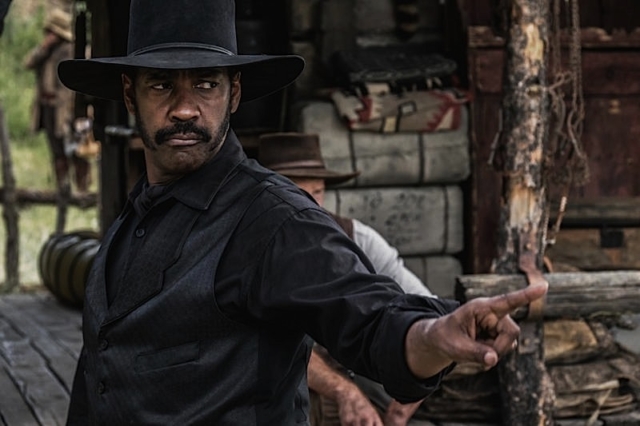 “Not only are the characters themselves well crafted and highly diverse, but they are introduced in a way that seems to be a lost art. There are no quick montages, introducing each character. We are taken on a journey as Sam Chisolm builds his team, and introduced to each character one at a time so we get a chance to know who they are, what their motivations are, and how they relate to each other. This gives a more authentic feel to the decisions they make as individuals and as a group.” —Jeff

“The visual storytelling takes what could have been an average movie and boosts it up a notch. There are a lot of glorious wide-sweeping pans that make you feel that you are back in the Old West. Artistic transitions just for art’s sake are a welcome change to the end of the blockbuster season. And objects placed in the foreground as our heroes ride horse back slightly out of focus to display foreshadowing is a rarity in a big-budget movie of this type.” —Drew

“Attention was also paid to the small details. Everything we saw on screen helps to build the world we are shown and it all felt so authentic. Everything is worn and dirty, the world looks well used and inhabited. It also helps that many of the stunts, explosions, and gunshots are done practically adding to how real everything feels.” —Jeff

“Aside from a handful of borrowed lines, themes, and characteristics from the original The Magnificent Seven, this action-packed re-envisioning is a great, modern take on the Western movie style, one with more humor and a much higher body count than you might expect.” —Drew

This movie finds itself standing with the Western greats of generations past; an authentic, gritty tale with a modern element to it. It is well cast with the right mix of humor and tension, and well worth a trip to the cinema.