Going to the Movies with Jeff & Drew: “Hands of Stone” 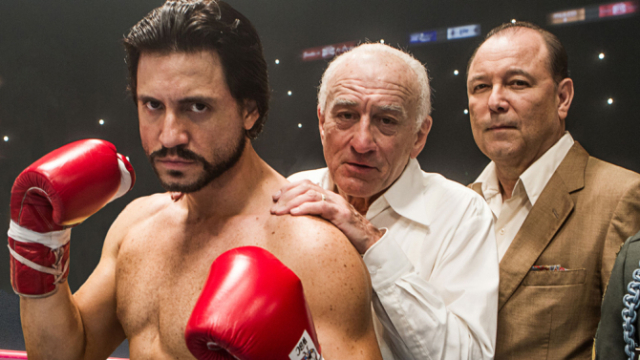 Photo by The Weinstein Company

Photo by The Weinstein Company

This boxing flick can’t stand in the same arena, let alone the same ring, as Creed. The biographical sports film tells the story of Panamanian former professional boxer Roberto Duran (Édgar Ramírez). Legendary trainer Ray Arcel (Robert De Niro) comes out of retirement to coach the world-class boxer. Arcel becomes a mentor to the ferocious, yet immature, fighter, convincing him that winning ultimately comes down to technique and strategy. After scoring knockout after knockout, Duran prepares for a bout against “Sugar” Ray Leonard, the undefeated lightweight champion, who became his greatest rival.

“I love boxing movies, but this one fails to land a punch. It shamelessly borrows scenes from great movies like Raging Bull and Rocky and mangles them. The pacing of the boxing matches is uninspiring and slow at best. At worst, the matches aren’t even believable because of sloppy acting and piss-poor makeup. After 15 rounds with ‘Sugar’ Ray, you need be at least out of breath and have more battle scars than one red blotch under your eye.” —Drew

“This movie is uneven. There are some nicely cut sequences that are shot extremely well with fast-paced editing. Unfortunately, those sequences are used for filler scenes to expand the runtime. The parts of the story that truly matter are slow, drawn out and, frankly, hard to sit through. It feels like there was so much more story there that should have been on the screen to flesh out this tale.” —Jeff

“Beyond a bold approach and a few good performances, Hands of Stone is a thoroughly painful and boring sports movie. We learn about Duran and Panama’s political history, but through a fog of cinematic blunders. Some scenes hold no weight to the story. There’s an uninteresting story line with Arcel and a gangster (John Turturro) that goes nowhere, and halfway through the movie he has an adult daughter (Drena De Niro) who is inexplicably thrown into an already busy plot.” —Drew

“I was disappointed because there is a compelling flawed-hero comeback story to be told, something the filmmakers don’t pull off. Novice director and writer Jonathan Jakubowicz couldn’t flesh out the potential of the mix of talent brought together on this movie.” —Jeff

“For a movie about two men beating the snot out of each other, it’s incredibly slow moving. At one point, I felt like I watched the first three Rocky movies in a row. Imagine my surprise when I found out this movie clocks in at only 95 minutes.” —Drew

“I couldn’t bring myself to care about the outcome. There was no emotion, there were no stakes and everything fell flat. This movie doesn’t go anywhere and drags on the entire time. This whole thing was sadly a big missed opportunity.” —Jeff

Hands of Stone is a poorly paced, disjointed mess that just doesn’t do this boxing legend, or the sport, justice.