Going to the Movies with Jeff & Drew: “Going in Style” 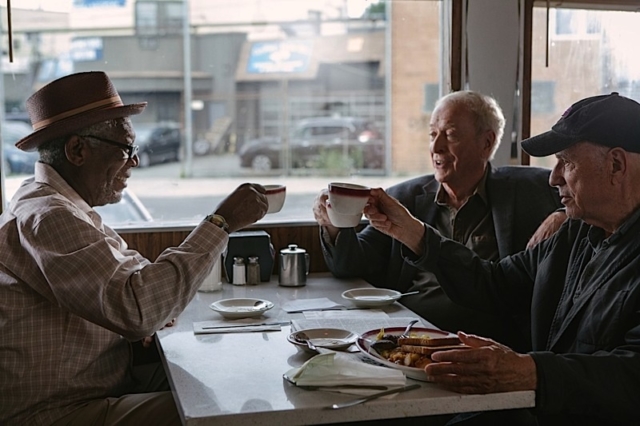 In this remake of the 1979 film of the same name, Morgan Freeman, Michael Caine, and Alan Arkin find that the company they worked for is bought out, and the merger makes their pensions obsolete. Inspired by a bank robbery Caine witnesses, the three seniors decide to take back what they feel is rightfully owed to them from the bank absorbing the company’s pension funds.

“Caine and Freeman deliver similarly affecting, well-judged portrayals of men who are grappling with a constellation of disappointments that, as befits their generation, they bear with stoic resignation and fiery resolve. The guys have a habit of calling each other ‘kid’ and ‘young man,’ and each time they do, it draws attention to their age and how little time left they have on this earth. It’s emotionally impactful. The chemistry between these three fine actors that keeps Going in Style afloat, lifting it from the formulaic and forgettable. It will never be remembered as a classic, but, as the men who play its crafty central characters know so well, there’s something to admire in simply getting the job done with restraints and a few well-earned laughs along the way.” – Drew

“While the story is nothing new, there are plenty of things to enjoy. The dialogue is where this movie shines. The leads have incredible banter throughout that generate some genuinely touching and funny moments. There is a case of the characters saying what most people are thinking about the relevant themes of the movie. The characters are set up and come across just like aging grandparents. They are highly likable as characters, which make it easy to feel for their struggle.” – Jeff 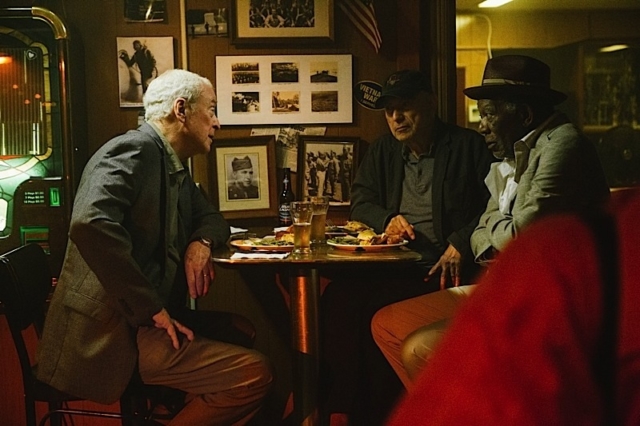 “Director Zach Braff, better known as JD from Scrubs, keeps things moving briskly and surrounds the leads with a well-chosen supporting cast. Braff is able to strike a balance between the movie’s raunchiness and family-friendly themes. He also does great in heartfelt scenes, especially where Caine’s character is developing a stronger relationship with his lonely granddaughter and trying to get the dead beat ex-son-in-law to take a more active part in her life. It’s a nice touch and adds the right amount of emotion to this bonkers heist film.” – Drew

“Something that works well in this movie and helps to sell its absurd authenticity is the details. From the way the characters move around, showing their age, to the set dressings, everything really sells the movie. As all of the characters are aging people, everything in their homes feels authentically dated for them. The phones, a few fully corded, bring back a wonderful nostalgia to an earlier time. The furniture is all properly dated to when the guys were younger. They bought their furnishings, and then styles changed. It felt like walking into a grandparent’s home that is a treasure trove of items from a bygone era. It all adds to a comforting nostalgia ride.” – Jeff

“The story about their economic commentaries is timely. especially as it relates to people who have retired. The theme of ‘you can work your whole life and be left with nothing at the end’ will hit very close to home for a lot of moviegoers. The leap to rob a bank after one of them witnesses it, is a bit flighty, as is the notion that the characters are owed the money from the heist. But we’re dealing with ‘Scooby Doo logic,’ so you don’t get too caught up in the little details. It’s still a fun flick.” – Drew

“Watching the movie while entertaining and funny, may not hold up over time. It has the star power and the writing to be a classic, but falters on originality. It’s not quite as clever as Ocean’s Eleven, nor as imaginative as The Italian Job. This is a simply an enjoyable heist movie.” – Jeff

Going in Style is a charming heist movie that lacks a real creativity and doesn’t try anything new. It’s funny and put together well, but it won’t stand the test of time.