Going to the Movies with Jeff & Drew: “Ghostbusters” 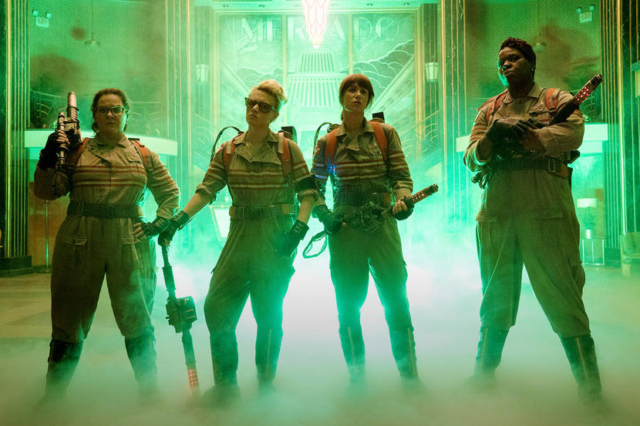 Over 30 years have passed and this supernatural cult classic gets a reboot. The new Ghostbusters centers on Erin Gilbert (Kristen Wiig) and Abby Yates (Melissa McCarthy). The two are old friends and scientists connected by a book they wrote about their interest in ghosts. Separated for years, a chance encounter then drives them back together. With Abby’s crazy genius lab mate Jill Holtzmann (Kate McKinnon) and street-smart subway attendant Patty Tolan (Leslie Jones), the new group of Ghostbusters have to save New York City from a man who want to bring the end of days.

“This movie is not a remake as much as it is homage to the 1984 film. The characters are completely new and original, as well as the settings and battles. They hit some of the same beats but with new flare.” – Jeff

“They are not at all Venkman, Egon, Ray and Winston clones. They have very different quirks, motivations, and back stories. The film is based around the emotional relationship of Erin and Abby. Holtzmann and Patty are definitely the comic relief. The reason why this movie’s characters work so well is because, like the original, the actors are playing to their comedic strengths.” – Drew

Ghostbusters stands out in the sea of reboots as one of the better ones, not as good as Star Trek, but definitely better than Robocop. It falters with some aspects that didn’t work, but really hits a homerun in other areas. There are enough nostalgia moments from the original, but the new cast makes it their own.” – Jeff

“This new Ghostbusters movie doesn’t even come close to the 1984 original. And you know what, I don’t care. This movie is just plain fun. Where it shines is its comedy writing. The jokes never stop coming and it’s not just humor derived from the world the movie has created. There are plenty random irreverent jokes that Director Paul Feig does so well, along with the traditional, dry sarcastic humor you’d expect from the franchise.” – Drew

“I found the humor to be a bit immature from what I would expect from Ghostbusters; it was over the top but didn’t become absurd. Some funny moments fell flat for me, but the rest of the audience seemed to enjoy them. What really worked was the world that was created. More attention was paid to establishing the characters and the science of the supernatural. The proton packs were introduced in a way that made them feel more tangible, and they were used extensively throughout the movie.” – Jeff

“This didn’t have the montages of the characters getting used to the proton packs like first two. Instead we get to see the progression of the pack being built. There are also fun new toys used for displacing ghosts. The energy blasts from the proton packs are a visual delight and the sound they make is just a warm blanket of nostalgia. This one is for the fans (me) who have always said ‘I wish they used their guns more.’” – Drew 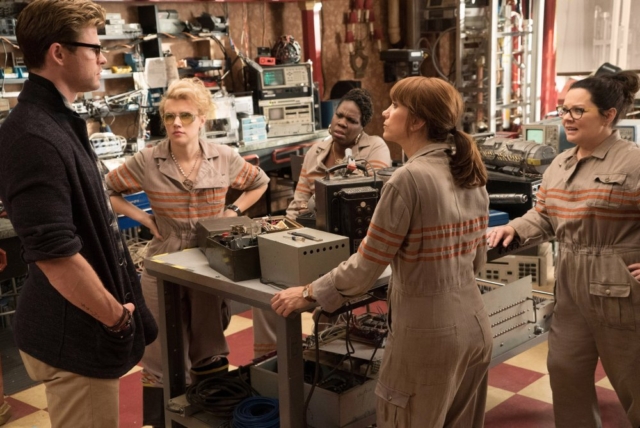 “The legions of ghosts the proton packs were used on left something to be desired. They were not real enough to be scary, or cartoony enough to be funny. Like something out of the live action Scooby Doo movie or a cheap Halloween DVD, they were a bland mess of cannon fodder for our heroes to dispatch. There were also moments that were unnecessarily repeated that felt like padding for the runtime. Repeated gags never work. Most disappointing was the forgettable villain of the whole movie.” – Jeff

“The soundtrack definitely left something to be desired. The film pays almost constant tribute to the original movie. Absent was the music of today playing at big moments and victory scenes of the film. Instead what we get whats seem like an unlimited supply of awful remakes of Ray Parker Jr.’s original Ghostbusters theme.”

Even with its faults and terrible soundtrack, this movie is very entertaining. Having PG-13 rating, there isn’t much that would be inappropriate for a younger audience. It will please fans of the original as well as build a new base of Ghostbusters fans.

Find Going to the Movies with Jeff & Drew on Facebook.