Going to the Movies with Jeff & Drew: “Baywatch” 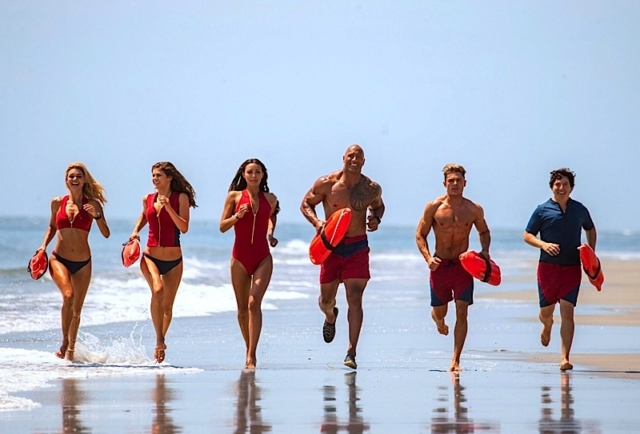 Baywatch opens with a shot of The Rock (Dwayne Johnson) carrying a person out of the water in slo-mo as the title aggressively drops from the heavens with a tremendous thud and dolphins leap out of the water in celebration. The movie keeps this level of ridiculousness through the end. The plot is very basic. To help boost the Baywatch brand, the lifeguard team’s superior (Rob Huebel) insists he hire a two-time Olympic gold medalist, Matt Brody (Zac Efron). Unfortunately, the swimmer doesn’t really know much about saving lives. Known for vomit in the pool, Brody realizes he has to prove himself in order to romp on the beach.

“As a TV show that debuted in 1989 and ran for 12 years, Baywatch became a worldwide phenomenon, serving up sun, semi-naked beauties, and very silly storylines. But no matter how powerful your nostalgia is or how much talent there is in the cast, it cannot survive a script this bad. Johnson is a charming as ever and Efron does good work in this film, but Baywatch relies way too much on its premise being funny at face value, plus a ton of cheap jokes simply to make the film more of a comedy than it already is. The issue is it gets boring, and not much of it is particularly funny.” – Drew

“When there are boner jokes at the beginning of a movie, you know you’re in for a ride. Baywatch is one bad joke after another as it tries so hard to be clever but becomes a parody of itself several times over. The attempted laughs consist of nothing more than crude jokes and worthless banter that serve no purpose to the plot other than to show how edgy the characters are. Most of the dialogue feels like the director just let the actors riff for a whole bunch of takes only to edit the best parts together that have no real connection from one scene to the next. The plot is barely held together with a weak premise of a bad guy bringing drugs onto the beach. The almost-two-hour runtime is packed with so much unrelated filler that it’s hard to feel invested in what you are watching.” – Jeff

“It should be no shock that the women in Baywatch don’t have much to do beyond look good. Even villain Priyanka Chopra, who seems to be totally miscast, has minimal dialogue. The camera spends most of the time looking her up and down while she wears form-fitting, low-cut dresses. Even if the ladies had more lines, the screenplay doesn’t give them much to work with. This isn’t gut busting dialog, and the gross out gags are not at all that shocking. If anything, Baywatch is a test for how bad can The Rock be while still charming the pants off the audience.” – Drew

“The CGI throughout the whole movie is so bad, you have to wonder if it was intentional. There has been better green screen work on SyFy Channel original movies. At one point, our heroes come upon a flame-engulfed boat where they are tasked with saving the occupants’ lives. The flames look like they were taken straight from a stock footage library and slapped over the footage. There are points where it looks like the same effect is copy and pasted over and over again, further detracting from the scene.” – Jeff 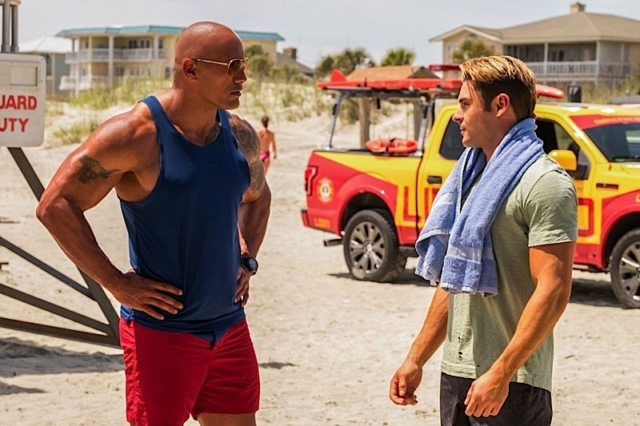 “This big-screen adaptation hopes to capitalize on the same irreverent spin that converted 21 Jump Street. But the tone proves all wrong. The film is a jumbled mess, not knowing what it wants to be. It jumps around between parody, tribute, straight-up reboot, coming-of-age drama, gross-out comedy, and surreal commentary on blockbusters in general. Baywatch sinks at the most basic levels. The post-credit outtakes aren’t that funny either.”

“The only saving grace is the whole movie knows what it is and doesn’t take itself seriously. The filmmakers knew the source material is a little ridiculous and ran with it, making fun of both the show and how the characters acted any chance they could. This results in several ‘why is she running in slow motion’ and ‘that seems like the plot of a bad show’ jokes. While it helps make the movie more watchable, it is also the only trope that they had to work with making everything so one dimensional it was hard to enjoy.” – Jeff

This remake of the popular show makes fun of the source while capturing none of the charm. It parodies so hard it becomes a parody of itself with one-dimensional characters and a very loose plot. The movie is barely held together enough to be coherent with enough boner and boob jokes to gag on.