Going to the Movies with Jeff & Drew: “Arrival” 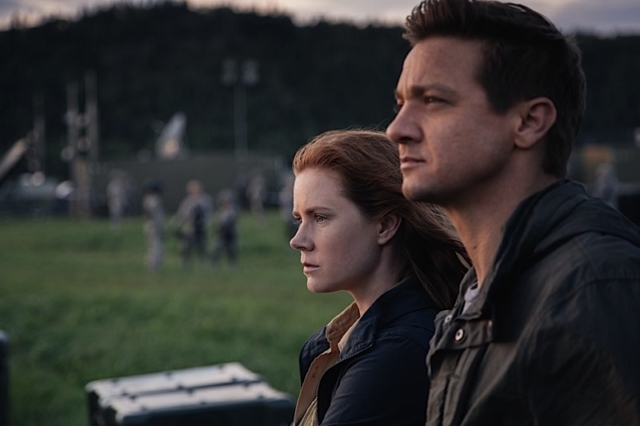 The concepts of war and peace, communication, and survival are all thrown in the crucible in this sci-fi thriller. Arrival is based on Story of Your Life, a short story by Ted Chiang. Humongous spaceships touch down around the world in 12 different locations. As nations teeter on the verge of global war, Louise Banks (Amy Adams) a linguistics professor, leads an elite team of investigators who must act fast to find a way to communicate with the extraterrestrial visitors before other nations commit acts of war.

“Arrival is entrancing, intimate, and moving, a sci-fi movie that looks not up at the stars, but rather deep within. The more humanity learns about the aliens, the more humanity fears them. The fact that 12 different countries are working with 12 different sets of aliens, we understand, is threatening an already tenuous global peace.” —Drew

“Director Denis Villeneuve brings together an outstanding cast to add the weight of emotions to what it would be like to make first contact. The anxiety and excitement Amy Adams’ character experiences sucks you in and holds you tight. I found myself mirroring her emotions as the story unfolds. Jeremy Renner is an excellent support as he tries to remain grounded and subdue his excitement.” —Jeff

“The moment in Arrival when the bean-shaped spaceships touch down across the planet, for me, sparks wonder and the endless thoughts of what could happen in this universe after the credits roll. Villeneuve mimics a style similar to Stanley Kubrick. You can feel the sense of the vastness of space; the humans are almost ant-like voyagers heading into the dark square tunnel of the ship’s interior. It’s bold, and Villeneuve makes everything work beautifully.” —Drew 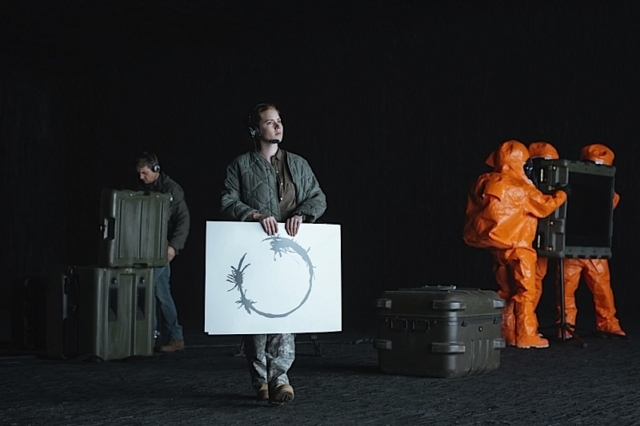 “In some scenes, the focus is on the foreground while something important is happening in the background. I found myself wanting to yell out ‘Look over there!’ as I felt my anxiety rising at what I couldn’t quite make out. The visuals were making me feel exactly what the characters were feeling. That sense of uncertainty, fear, and anxiety all came leaping of the screen. Instead of just telling the story, the movie makes you feel the story with what it doesn’t show you.” —Jeff

“This is a gorgeous film to look at, an eye-popping, smooth-sounding adventure that is so rich in depth that it encourages us to ponder big questions. It’s light years away from the played out ‘Take me to your leader,’ but it raises the same problem in an original way. Not since Close Encounters have I seen something that recognizes the distance we might have to cover if we want to communicate better.” —Drew

“As with the visuals, the audio is expertly crafted to enhance your emotional connection to the story and to focus our attention where it needs to be. There is a subtlety with which sounds are inserted or removed to draw your attention to certain aspects of the story. At times, there are strange almost whale-like noises that cause a sense of wonderment as to the source and meaning behind them. Other times, sound is completely removed, leaving you to hear only the blood pumping through your ears, heightening your awareness and putting you on edge as to what is about to happen.” —Jeff

Arrival is an expertly crafted masterpiece of the human condition. More than just mindless entertainment, it has something for everyone and will be sure to make you think and feel.