Going to the Movies with Jeff & Drew: “Alice Through the Looking Glass” 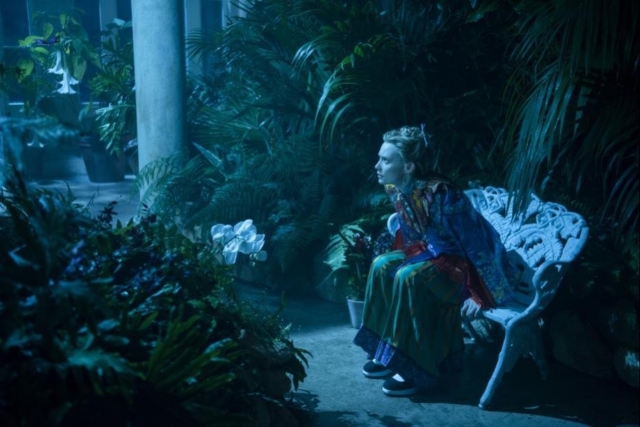 Alice Through the Looking Glass is a fantastical, awe-inspiring film. At first, this movie teases another pro-feminist story with the same young heroine, Alice Kingsleigh, who is now following in her father’s footsteps as a sea captain. She makes the impossible happen on the high seas with her ship, the Wonder. However, upon returning to London, Alice is given a tough pill to swallow that will force her to give up her vessel.

With the help of a giant mirror, Alice (Mia Wasikowska) returns to the whimsical and nonsensical Wonderland. The focus moves past its feminist story and locks in on Alice’s mission to save the Mad Hatter (Johnny Depp), who has become ill. Hatter’s wild orange hair is fading to a ghostly white with thoughts of his family who were thought to be dead. White Queen (Anne Hathaway) tells Alice the only way to save her friend is to journey back in time to solve the mystery of the Hatter family. Alice steals a device from Time (Sacha Baron Cohen), called the Chronosphere, that allows her to travel to the past. Alice witnesses the highs and lows of friends and enemies during their lives, discovering how it prompted them to become who they are.

Looking Glass does a few things better than its predecessor. Where Alice in Wonderland chose style over substance, director James Bobin brings a more cohesive story, while maintaining the essence of the fantastical world of Wonderland. This film skips a long unnecessary introduction and jumps right into setting up Alice as a strong character. There is some great writing that evokes the soul of Lewis Carroll’s books even though the story differs wildly from the source material. The influence of Tim Burton does spill over from the first film, but only the best parts — the thoughts cemented in this world — remain. The film, as a whole, benefits from a new director who knows how to make a humorous ensemble of fantastical creatures work. Bobin’s experience doing two Muppet movies made him a great fit to tell this story.

On the flip side, the movie fails to be consistent with the world established in the 2010 Alice in Wonderland. The way time in the real world moves compared to Wonderland differs greatly and seems to be adjusted to fit into the story. This would be a bigger problem in other movies, but it gets a pass here because Wonderland doesn’t have to fit a perfectly constructed world. It is Wonderland, after all. Other parts of the story also seem to be shoehorned in to fit the narrative that even Wonderland can’t explain. Exposition dialogue fills the movie in a way that talks down to the audience. Alice finds herself fumbling through each encounter; she just happens to always pick the right thing and end up in the right place without much explanation as to why. The Chronosphere is a plot device that sets the whole adventure in motion, but little is said about what it looks like or how it works. Alice somehow manages to find it in a giant castle, knows exactly what it is, and knows how to use it.

“This movie takes a bold continuation of the Alice books. This unique storytelling takes a lot of risks breaking rules it sets up.” – Drew

“Breaking the established rules in a movie world is lazy, and it causes issues with story and continuity. An ever-changing fantasy world like Wonderland has more freedom to do this, but still manages to confuse things.” – Jeff

“The movie does play it safe, playing off themes of a time-travel story that the audience is accustomed to, like The Time Machine or A Christmas Carol. – Drew

“The biggest reason it works here is because Wonderland is so absurd that they can do just about anything.” – Jeff

The cast remains the same from the first film, with the exception of the introduction of Sasha Baron Cohen as Time. He steals the show with his portrayal of the magnificently created character. He is witty, full of fantastic puns and visually interesting, with a good mix of person and clock gears. Cohen brought his unique brand of humor to the character, while assimilating seamlessly into the world of Wonderland.

The thing that Tim Burton excels at is creating visually stunning world. This film takes that look and manages to take it up a notch. The imagery is interesting to look at, while still serving the story without unnecessary clutter. A world like Wonderland lends itself to a high level of creative, visual freedom, and this movie runs with it. If nothing else, Alice Through the Looking Glass is visually stunning.

“Tim Burton would have utterly ruined this movie in the director’s chair. He can make things pretty but has a hard time telling a great story. I wonder what this would have been without him attached at all.” – Jeff

“I would agree that he would have ruined it; he does sacrifice content for style. At times, I don’t mind, but it became a problem for me in Alice in Wonderland and Charlie and the Chocolate Factory.” – Drew

“It only works when he creates an original story, such as The Nightmare Before Christmas, but fails miserably with established properties.” – Jeff

With no book to rely on as inspiration, this film tells an interesting and engaging story that feels true to the source material. It starts to feel a bit long with a runtime of 113 minutes. But fans of the first one will be pleasantly surprised, and newcomers can still enjoy this sequel without knowing anything from the first film.