Going to the Movies with Jeff & Drew: “My Big Fat Greek Wedding 2” 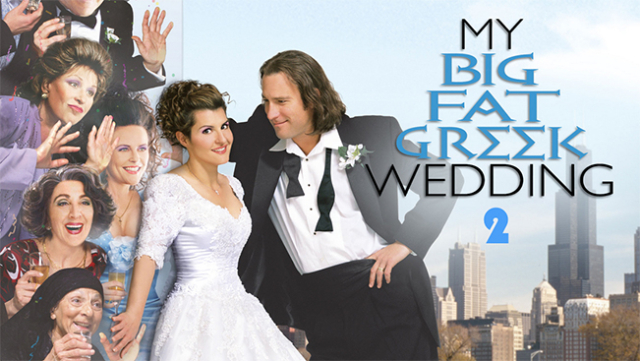 It’s time to pull your neck back and take a selfie, because all of us get to be Greek one more time.

Fourteen years after the 2002 runaway hit My Big Fat Greek Wedding, this film takes us back to the great city of Chicago. We meet up again with the Portokalos family, who are just the way we remember them: marrying Greek, having lots and LOTS AND LOTS of Greek babies, and using their secret cure for every ailment, Windex. All your favorite relatives are back: Toula, Ian, Gus, Maria, Aunt Voula, Angelo, Nick, Nick, Nick, Nick and Nikki.

This movie starts the same way the last one did, with Gus and Toula sitting in the car. Gus has not given up his idea that Greek girls should marry boys and have babies. Within the first few minutes, you are taken back to the first movie, all the way down to Toula finding her old, ugly glasses. This film focuses on Gus, who wants to prove that he is a direct descendant of Greek conqueror Alexander the Great. This becomes a running theme throughout the movie of why Gus thinks that everyone is Greek. While going through documents looking for information to fill out an ancestry website, he comes across his marriage certificate. It happens to be missing a signature from the priest. This makes his marriage to Maria not official, and it’s why we need My Big Fat Greek Wedding 2.

“I found myself genuinely laughing at points, more than just a halfhearted chuckle. A movie hasn’t done that for me in a long time.” —Jeff

“The entire family trying to help Gus use the computer so he can fill out his ancestry form is one of the funniest scenes in the movie. I can relate.” —Drew

This second installment had the production value of the first film. It was well shot, well acted, and the locations were well thought out. Most romantic comedies are not overly complicated to shoot. Make sure you can see everything and that it looks good. This movie did this in spades. It was about as technically correct as one would want from a good picture. The actors brought their Greek charm in the over-the-top performances you would expect, while still managing to take it up a notch. It’s the overbearing family you love to watch. All of the aunts and uncles and grandparents return, including Mana-Yiayia, who is more well-rounded and wise. The characters didn’t have a lot of arc or development, but there was not much needed for the story. They were still entertaining on screen and funny throughout.

The story was original and captivating, while maintaining enough throwbacks to the first to satisfy returning viewers. The themes of togetherness and love were once again pervasive through the whole narrative, and still told a new story. It maintained the feel that was so loved about the first movie.

“I didn’t have high hopes going into the theater. There are too many bad sequels popping up that seem like desperate money grabs and lack any real content. I ended up so engrossed by the film that I often forgot to write down my notes. That’s good storytelling.” —Jeff

“This is not a rushed sequel. The jokes are really funny. The story isn’t forced, and they resolved some unfinished conflict from the first film. This, I feel, puts it in the same realm of Father of the Bride Part II.” —Drew