Going to the Movies with Jeff & Drew: “Batman v Superman: Dawn of Justice” 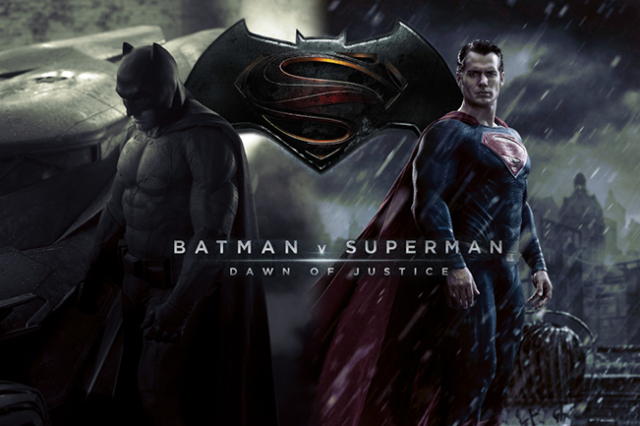 It’s time to pick a side. The biggest comic book debate in history is now playing out on the big screen.

The latest installment in the DC cinematic universe is exactly what you would expect and what the trailer told you it would be. The movie starts off with the Batman origin story we should know all too well, with the death of Batman’s parents. Flash forward to Superman fighting General Zod at the end of the previous film, Man of Steel. Only this time we have the perspective of Bruce Wayne, who is racing around the streets of Metropolis, narrowly avoiding being hit by the falling debris being slung by these two powerful beings. As Bruce jumps out of his car to save the people on the ground, it becomes crystal clear how small and powerless everyone else is to these too behemoths fighting in the sky. Fearing the uncontrollable power of Superman, the Dark Knight tries to be the hero he thinks the world needs.

This is not a Superman movie; this is a Batman movie. The central plot revolves around an aging Bruce Wayne and his demons. It is plain to see that he has fought and lost many battles that the audience is not yet privileged to know. Ben Affleck is good as Batman. He plays an older, less tolerant Caped Crusader resembling Frank Miller’s Batman in the 1986 four-issue comic book miniseries The Dark Knight Returns. Henry Cavill gives a solid performance as the Man of Steel, no different from the last time. A surprise was Jerry Irons as Alfred. He embodied the character that people are so used to from the comics. The characters that fall short are Lois Lane, played by Amy Adams, and Lex Luthor, played by Jesse Eisenberg.

“Lois Lane is useless in this movie. She does nothing but get saved by Superman. Two times she causes her own peril. And, I’m sorry, Jesse Eisenberg is not believable as the evil, power-hungry mastermind Lex Luthor. He is more of psychotic crybaby.” —Drew

“Affleck and Irons really carry this movie. I want to see a Batman movie with these two that isn’t held back by a Superman subplot. Cavill’s Superman was bland. The whole thing really felt like one great movie and one subpar movie mushed together into an uneven heap of blah.” —Jeff

The unmistakable style of Zack Snyder was all over this film. The color palette and visual styling was exactly like his other movies. There were numerous slow motion hero shots that were unnecessary, gratuitous use of handheld camera work that did not always fit with what was happening on screen, and mass amounts of action. In the end though, this styling works for this type of movie.

“You’re going to get what you expect out of a Zack Snyder film. While it works for the comic book style, there is a point that it becomes too much and starts to detract from the experience. How many times do we honestly need to see a slow motion shot of Superman flying down to the ground?” —Jeff

“Zack Snyder is becoming more of a Michael Bay Jr. type. The last part of the movie seemed like they stopped writing the script and just thought of ways to throw characters into things to create explosions.” —Drew

The movie’s runtime is its biggest problem. Even for die-hard comic book fans, two and a half hours is tough to swallow. Numerous chunks of the film had no bearing on the overall plot of what we were watching, but were ads trying to set up further movies in the franchise. Some scenes were painfully too long, and the movie becomes hard to sit though.

“I’m all for Easter eggs that hint at things that are to come, but spending several minutes on story for another film that adds nothing to the one I’m watching feels unneeded. Give me a better story for the movie I came to watch.” —Jeff

“There are nine DC movies coming in the next four years, and this movie suffers, because it spends way too much time trying to set up all of them.” —Drew

Batman v Superman is a very entertaining superhero action movie. Even with most of what little story there was already shown in the trailer, there are still a few surprises left to be discovered by the viewer. There was plenty of action and lots of material pulled from several comic sources that will be sure to satisfy those hardcore DC comic readers.