Gliding Down the Rhine

Castles on the Rhine; murmur those sweet nothings, and I’m a goner. Sign me up. All Viking Cruises had to do to seal the deal was offer guests a sweet promotional discount and I was out the door. Mention a brand-new 280-passenger ship (Heated bathroom floors! Free excursions! Food fit for a Michelin inspector! Free wine with meals! Sundeck for perfect viewing!) and my Visa started smoking. Somehow the cruise director even managed to procure a week without a single drop of rain. 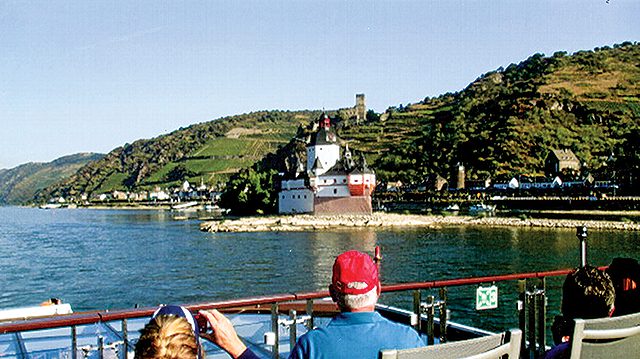 Castles low and high on the Rhine cruise. Photo by Carla Waldemar

And those castles. That stretch of the mighty Rhine has long attracted poets (Byron, Goethe), novelists (Hugo, Twain) and painters (notably, Turner) to ogle those romantic outposts of Romanesque, Gothic, and Baroque design presiding over hilltops at every bend, hemmed by undulating vineyards, crumbling Roman walls, trains scooting along the riverbank, and small towns ready for their close-up.

Another lure was the chance to check a number of alluring cities off my bucket list. First port: Basel, at the pinpoint where Switzerland meets France and Germany. Locals (lots of them, this sunny Sunday) actually swam the river as I strolled its banks en route to landmark Münster Cathedral of 1019, its glittering pink sandstone supporting two frilly towers. Kids were tossing rose petals at an emerging wedding couple while, above the door, St. George slayed his dragon and St. Martin gave away his cloak. Inside, philosopher Erasmus rests in a simple grave.

At the nearby Town Hall, Disney-esque murals of local history feature heroes clutching swords and horn-tootling mermaids. But my goal was Basel’s famed art museum — actually, three buildings, the newest by Herzog & de Meuron. It’s an all-day project to revel in many, many Chagalls, Picassos of every period, every Impressionist and Expressionist, and a gallery of Swiss painters losing their propriety in splashes of bold color. And a lovely courtyard café when your feet give out.

That night our ship passed through four locks as we glided between the boundaries of France and Germany, accompanied by fleets of swans and Sunday boaters, to dock on the German side at Breisach below venerable St. Stephen’s Cathedral with its 12th-century pink sandstone tower to guide our climb. Inside, a modern stained glass window (the aftermath of war) and a spectacular altarpiece of Mary being crowned by a frenzy of angels arranging her stone drapery. Above the entrance, more angels pester a corpse to rise from his coffin.

We next boarded a bus to tour the Black Forest, of Grimm Brothers’ fame, as our guide gushed over pastures of “happy cows.” We stopped to hike through a lively village to the forest’s silver waterfall.

Those swans followed us to Strasbourg, the most German of French cities (borders changed more rapidly than some folks’ underwear). Here, bakeries offer both pretzels and croissants and cafés sport dual menus of pigs’ knuckle and foie gras. This island city, bordered by both the Rhine and the Ill, was founded by Romans in 12 B.C., and their excavated treasures are on view in the town’s archaeological museum aside the grand Strasbourg Cathedral of 1439, its mis-matched Gothic spires rise above magnificent stained glass (hidden from war damage in salt mines), one aisle a catalog of former emperors, the other portraying Bible stories. As its fabled Horloge astronomical clock strikes the hour, a tiny skeleton trundles off and newborn man appears. Then, follow cobbled alleys to the medieval covered bridge spanning a canal in the city’s Petite France quarter, where half-timbered houses lean over the water. 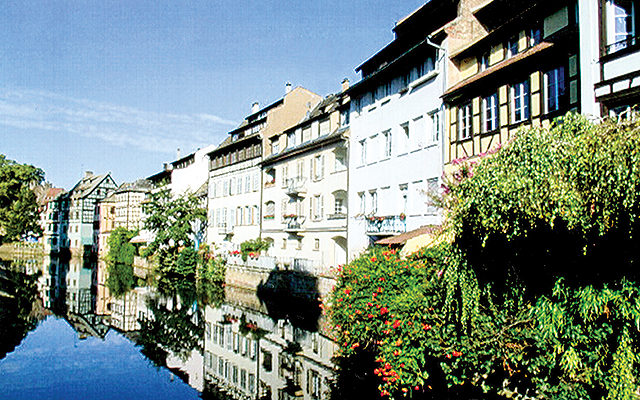 Heidelberg, up next, would be a drive-by if not for its amazing castle, actually a silhouetted ruin of its former glory. This peculiar building bristles with add-ons and ‘improvements’ affixed over the years, as well as a prison tower where guests awaited ransom and a witches’ tower, whose suspects were locked up to starve, freeze, or leap.

The lure of Rudesheim, a bit farther along the river, is wine: making it, drinking it in the wall-to-wall weinstube that crowd its narrow alleys. If time, or ambition, allows, hike the vertical trail dividing hillside vineyards for a super view.

Cologne is all about beer. Some folks head straight for the taverns, others for the famed chocolate museum. I raced (as usual) for the historical stuff, mesmerized, once again, by those Romans. Julius Caesar conquered the place, which Nero, of fiddling fame, later called home. During WWII, while building an air raid shelter, a fabulous trove of third-century mosaics were discovered, floors of villas now on view at the Roman Germanisches Museum aside Cathedral Square.

Oh, that cathedral, largest in all Germany! Believers revere the relics of the Bible’s Three Kings, whose skeletons, they say, are preserved in the golden casket on view.

Just behind it, another treasure house, this one of vibrant modern art, banned by the Nazis as degenerate, but purchased discreetly by a wise collector who later donated it to the world’s viewers: the largest collection of pop art in Europe and third-largest cache of Picassos. Old masters aren’t forgotten, either: the Wallraf-Richartz-Museum showcases Cologne’s own artists of the 1500s (Albrecht Dürer among them).

Time to go Dutch: at Kinderdijk 19 windmills from the 1700s pose like sentinels along the dikes. Docking in Amsterdam, we bid goodbye to fellow passengers and crew (bear hugs all around). To plan your voyage, visit www.VikingCruises.com.

This is the city that comes to mind when you think “Old World charm.” I stayed on in the well-located INK Hotel, housed in a former newspaper office, bristling deliciously with cheeky snark amid its chic. From my window I gazed onto the gabled rooftops of tilting houses, huddling together for the past 300 years. Each of the city’s 100 km. of canals, crossed via 1,500 bridges, boasts a similar streetscape of lace-curtained windows lush with geraniums and a lazy cat. As you walk these cobbled streets, a cantata of bike bells chimes around you. Perhaps it’s the locals summoning you to the pub to join them for a glass of beer (hint: Heineken).

If you’re keen to visit the Big Three of Amsterdam’s museums — the Rijksmuseum (Rembrandts!), Van Gogh, and Anne Frank House — secure tickets online to bypass the impossible lines. This trip I let myself simply wander through the city’s districts, from Red Light (tamed these days) to blue-collar-gone-posh Jordaan, stopping at flea markets (you never know) and shops with names like Suspenders and No Boys Allowed, amid pop-ups advising “buy now or cry later.”

Okay, I couldn’t help myself; I had to visit my favorite museums after all: the collection of Jewish synagogues (they escaped destruction, though their congregations didn’t); the Resistance Museum, documenting how ordinary people (teenagers to priests, milkmen to aldermen) sabotaged the Nazis. New to me: FOAM, showcasing photography, presently the shots Chinese dissident Ai Weiwei took while under house arrests. And the tiny gem that’s the Museum of Bags and Purses, art and social history combined.

Get your bearings via an hour-long canal boat tour, then make plans to come back soon by visiting www.iamsterdam.com. Celebrate the place where gay marriage has been legal since 2001, the first in Europe.