Rolling With The Rainbow Bowling Leagues 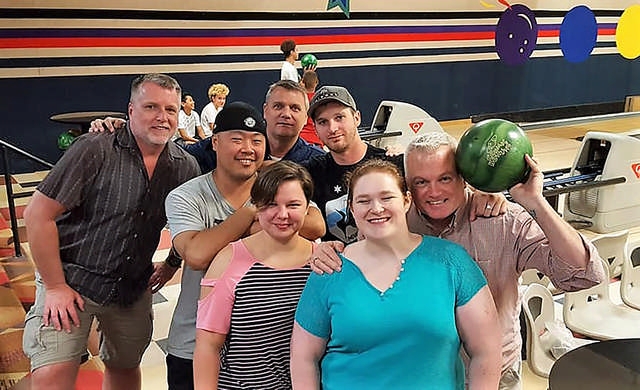 The Hump Day Bowlers are one of three GLBT bowling leagues in the Twin Cities. Photo courtesy of Steve Nardini

The thud of a 12-pound ball as it collides with the floor, followed by the dull grinding sound it makes as it glides along the polished wood and the hoped-for crash of pins tumbling over. Throw in the cheers of your league-mates and you have the perfect setting for a night out.

The Hump Day Bowlers, Wednesday Rainbow League, and TC Pride Bowlers are three of the many GLBT bowling leagues found throughout the Twin Cities that open their arms to people who want to enjoy the sport and camaraderie of the lanes. All three, coincidentally, have league play on Wednesday evenings from September through March or April.

The Hump Day Bowlers got their start in 2002 with just six teams. Steve Nardini, the league’s secretary and treasurer, joined as an opportunity to meet other people “in a comfortable atmosphere, doing something that anyone can do,” he says. “Everyone can bowl, no matter your age, sex, or skill level.”

Nardini describes his league as casual, comfortable, and supportive. “We have bowlers who have bowled a 45 during one game; we’ve had a bowler with a perfect 300 game. There’s no judgement—just praise and applause for everyone’s achievements,” he says.

Any money left over from membership fees after the league pays the alley goes back to the bowlers at the end of the season in awards and prizes. But it’s not all fun and scores or prizes and trophies. A few years ago, the league started having food shelf drives. In 2013, they organized a “fun bowl” and gave 25 percent of proceeds to charity. Now the league organizes 9-Pin No-Tap Bowls to benefit Little Brothers—Friends of the Elderly LGBT Outreach and Bowl for the Cure.

“The league has raised a combined total of over $12,000 for these and other organizations over the last seven-plus years,” Nardini says. “And we just concluded our seventh annual 9-Pin Bowl for the Cure Fundraiser on Jan. 27, 2019.”

With the start of the 2019–20 season, Wednesday Rainbow League will be celebrating their 40th anniversary. “We are one of the largest leagues in the state and International Gay Bowling Organization,” says league secretary Blaine Boverhuis. “I believe what drew people to join our bowling league is the fun and social environment where they meet so many great people from the community.”

The league’s members represent every skill level from the very beginner/social bowler to the advanced bowler who participates in several leagues each season. Boverhuis says. “We welcome everyone to the league with open arms as long as their goal is to have fun while bowling!”

Boverhuis is proud to work with the other board members to promote the league as a great opportunity for people in the GLBT community (and allies) to have a safe place to be their true self without fear of being judged or bullied. He says, “I can speak from personal experience that this bowling league showed me that it is okay to be your true self.”

When construction of the new soccer stadium demolished a bowling alley in the Midway last year, rather than move with the Hump Day Bowlers to their new location in South St. Paul, some of the league’s Minneapolis residents broke off to form a league closer to home: TC Pride Bowlers.

When league play resumes in the fall, the TC Pride Bowlers will have 14 teams, consisting of 3–6 players each. Former league secretary Justin Odegard says that for most people, the league is more of a social outing (although some competitive players travel to out of state tournaments). “More people are willing to come out and just have fun with it and not worry about having to do well,” he says.

When the league formed in 2018, Odegard saw some new faces. “They were super happy to have this sporting event not too far from where they live to go to on weeknights,” he says. “If you are interested in coming and joining, let us know. The more interest we have, we can relay that back to the bowling alley and if more lanes open up, we can have more people join.”