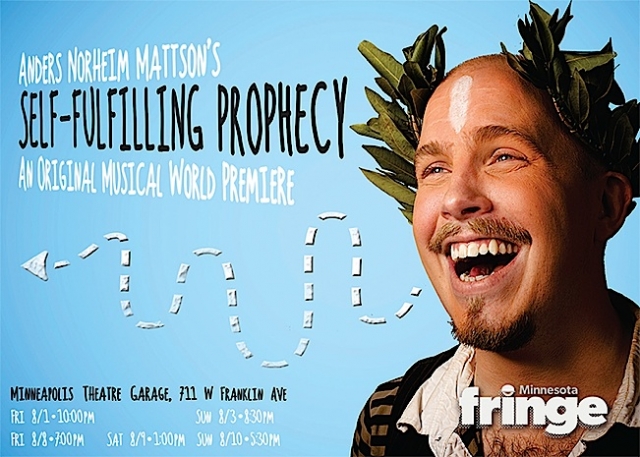 Anders Mattson is a gifted composer who has an ethereal sensibility that’s simply dreamy to listed to. Though, understandably, he doesn’t want to be pigeonholed, he still points out there is a sort of gay lens through which he views certain things. He is also part of an increasing pull away from gay images that tend toward victimhood.

Mattson: So I guess the question is: How is this show gay? First of all, half the cast and crew consists of gay men, including me. I actually am really into the idea of having gay main characters because I don’t think we see that enough. And too often our representation in art is that of a tortured soul in search of identity, which I think may be a lot of folks’ reality, but it kind of reinforces a negative stereotype. The impetus of this show is moreso my economic oppression rather than my sexual oppression.

That being said, I think the subject matter, Greek mythology, is something that has resonated for gay men for centuries. It was the dawn of Western civilization, and also the most famous instance of a culture that didn’t just tolerate homosexuality, but where it was normalized to the point that it seems no one needed to comment on it. I think the Greeks really understood the power of stories in shaping the culture we live in, and so in order to explain their sexuality, they invented the story of Ganymede (among others) who is abducted by Zeus, appearing to him in the form of an eagle, and brought back to Mount Olympus to be the cupbearer to the gods. The eleventh song in this show is sung by Ganymede before he encounters Zeus.

Lyrics to the Eleventh Song:

GANYMEDE: Where I come from the well is far away
And it’s too hot to walk there in the blistering heat of day.
The women and the girls in the very early morn
Could make it there and back before the sun could burn.
Where I come from there’s no such thing as gay!
There are beatings from my father for looking the wrong way.
For admiring the grace of balanced urns,
The king, my lord and father told me never to return.
You look like you might know
Many a thing about that, though…

Oh, tell me am I fated
To find a love that keeps me sated?
Divine or mortal will I find acceptance?
I wish that I could be swept off
To a place where I am truly loved
And giving love remains my one remembrance!

ANDERS: Oh, Ganymede, you will find what you need!
Love has planted its seed in your heart!
And just like a cup, it doth filleth you up!
Pour it out when your cup runneth over!