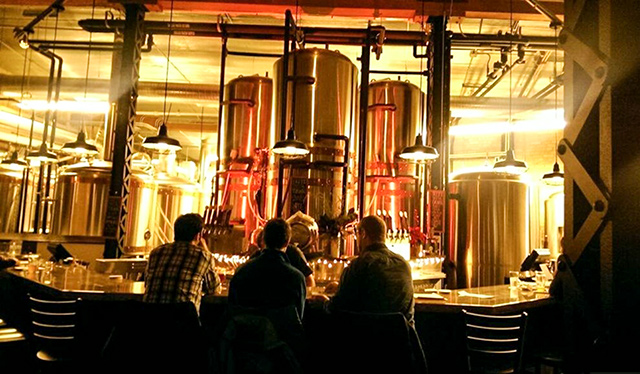 When you hoof your way through the Capital City’s Saint Anthony Park neighborhood, it’s not hard to invoke an earlier time, especially when you get to 2325 Endicott Street. You notice straw-colored brick that, supported by licorice-colored steel, forms a farm-like edifice, and, as if recalling a dead stranger’s memories, you can almost see a tweed-hatted, denim-swathed laborer fastening a wagon’s pole shaft to its trace, its trace to its harness, and its harness to its reins. You can almost hear the rhythmic clip-clop-clip of hooves leaving the building, the round, wooden grind of a wagon’s spoked wheels as it gossips with the cobblestones. You can almost whiff the smell of…the smell of…well, it’s probably best not to dwell on the pongs of that Gilded Age.

If you tread past the doorlike windows and enter through the windowy door leading to Suite 11, you’ll find an inviting establishment that has come into existence only recently—relatively speaking, that is.  Urban Growler Brewing Company was opened in July 2014 by head brewer Deb Loch and her partner, Jill Pavlak. These two combined their complementary skills and passions to create great beer, food, and space for everyone.

That last point is key. “Everyone needs to feel loved and accepted,” Deb Loch elaborates. “Today there’s so much that divides us. At Urban Growler, Jill and I wanted to create a culture where we could come together—GOP, DFL, gay, straight, whatever—where we’re brought together by a common culture…beer.”

That last point is key, as well.  Urban Growler isn’t just a trendy taproom, it’s a packaging microbrewery. That means that beer crafted in the brewery taproom is poured into kegs and further distributed to metro area retailers. (Growlers, not incidentally, are handled, refillable half-gallon bottles popular amongst beer connoisseurs…because moderation is for frou-frou wine drinkers.)

The in-house hops soda can also be enjoyed within the building where it was created, that building being a repurposed horse stable used by the Saint Paul Police Department before the invention of the high-speed chase. The Urban Growler features a kitchen, a taproom, a beer garden, and a patio, and that’s not all: it also includes places that can take that space-for-everyone-ness to its most strident form: marriage.

Loch and Pavlak know about that particular institution—they are, in fact, life partners as well as business partners…and although their marriage ceremony was a low-key affair that predated the opening of their business, it left a mark on their approach when aiding and abetting the matrimonies of others. “Our main goal is to make it easy for people,” Loch assures. “We meet with the couples and figure out what they want and what we can offer. We’re always trying to reduce their stress. There are so many possibilities.”

The opportunity to borrow space itself arrived in gradating possibilities. Urban Growler’s first rental area was an upstairs room nicknamed, for the obvious reason, the Hayloft. Spatial capacity was increased with the addition of the Barrel Room. An even-more-recent addition has compounded potential social volume to nearly-Madonna-wedding-levels…that is, Urban Growler can now accommodate from 150 to 175 possible wedding guests. 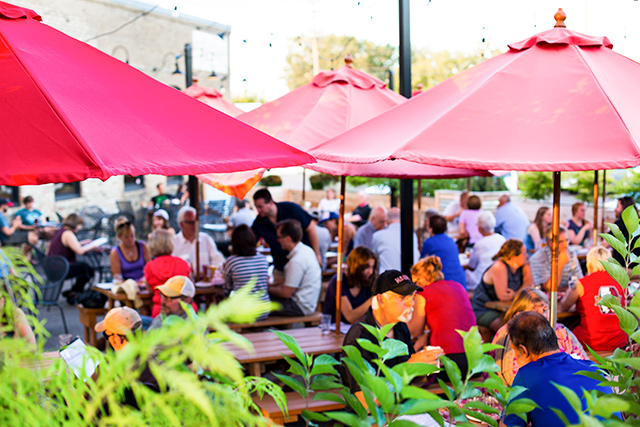 This area has been used for multiple rehearsal dinners, myriad wedding receptions, and precisely one nuptial ceremony. “So far,” Loch qualifies. “Many of the renters create themes for their weddings or their dinners. The only limit is their imagination. The exposed brick creates real ambience. It’s not just a dinner—it’s an experience.”

Loch reports “rave reviews” from people who have turned the space into their own experience…but when pressed, they’ve made suggestions that led to improvements in air conditioning and accessibility. Says Loch, “We’re always listening.”

The establishment’s website promises, “neighborhood atmosphere, specialty house-made beers and tasty food menu come together to create a memorable event for you and your guests.” You might not think of a brewery as place to say your vows, but a repurposed stable might, in fact, be the perfect place to get hitched.

Circling The Wagons—Rehearsing, Receiving, or Betrothing at Urban Growler

Although parking can be a misadventure within Saint Anthony Park, it’s not much of an issue for visitors of the Urban Growler in search of a hitching post. A large parking lot is adjacent to the former stable, and other lots abound in the area. Further, because the Urban Growler is helpfully surrounded by roads, on-street parking is also available.

Once inside, you have multiple options where celebrating is concerned. The first of these is the commodious Barrel Room, part of which is offered for your partying needs. When it’s not teeming with celebrants indulging in its singular character, the Barrel Room also serves, as its name implies, as a barrel aging room. The space can be configured for seated meetings or cocktail height tables for receptions and socializing.

If you’re not stairs-averse, you might consider the Hayloft, which looms over the Taproom. It can house up to 49 partiers, thanks to its previous iteration as an actual, lowercase-h hayloft, harkening back to its years as fuel storage for the police horses who protected and served your great-grandparents. Much like the Barrel Room, the Hayloft can be configured in any number of ways.

The Taproom is available for rent exclusively on Mondays, the particulars of which are handled on a case-by-case basis. And, come to think of it, if you’re the type of person who would want to get married on a Monday, you’re probably not going to set foot inside a brewing company in the first place.

Regardless of the day, catering options abound: a virtual tray-o-copia is available—veggie trays, fruit trays, sandwich trays, and hummus trays, each accompanied by a side of appropriately savory garnish; finger foods are available for your tactile and gustatory pleasure—spinach dip crostini, bruschetta, chips and pico, beer cheese ball and crackers which serves 15 to 20 guests…or five writers. 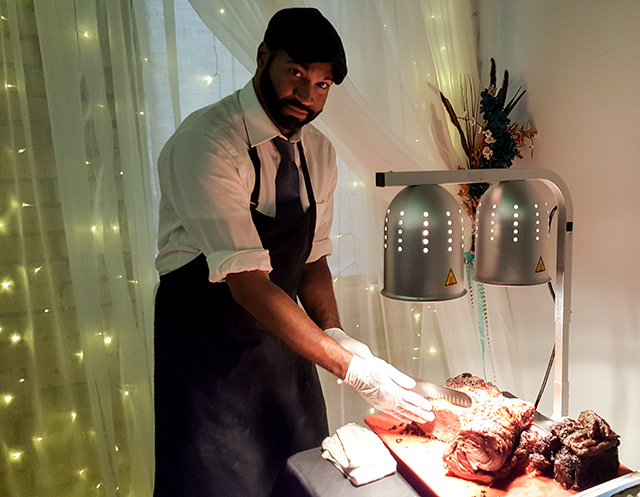 And then there’s everybody’s favorite indulgence, dessert—cookie trays, brownie trays, cheesecake trays. Urban Growler offers no penalty for those who, like us, order All Of The Above.

Obviously, beer is what makes Urban Growler unique amongst similar space-renters. Urban Growler recommends such a service be taken in the Hayloft which has its own bar. The beer itself is made in 10-barrel batches under the watchful eye of Deb Loch, who attained the rank of Master Brewer in specific deference to her ownership. “Our brews may be traditional,” the website supposes, “like Cowbell Cream Ale®, non-traditional like our Big Boot™ Rye IPA, or inventive like our Plow to Pint® Series that uses the harvest of local farmers to create beers with a unique twist.”  The buds-blowing selection adds a whole new meaning to the phrase “hitting the hay.”

The Urban Growler requires a $25, non-refundable booking fee, as well as two weeks advance confirmation with final food and guest count. No outside food or beverages are allowed, but seriously—who would have room for either at this point, anyway?