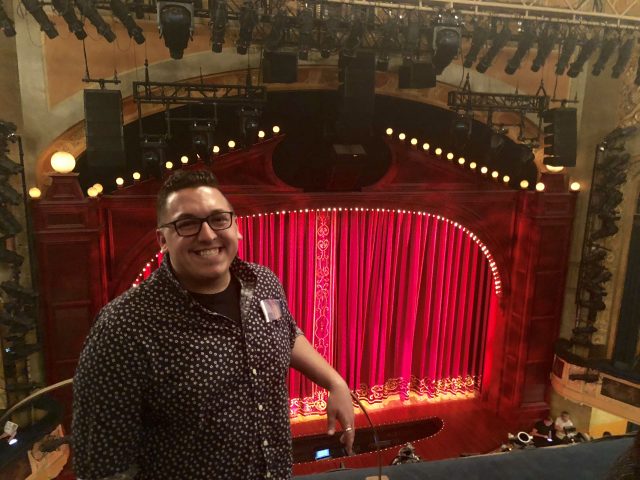 This January marked the official debut of Lavender‘s new arts and entertainment columnist, Brett Burger. In addition to penning the Coming Attractions feature in every issue, Brett will be writing online-exclusive theatrical reviews and additional print pieces, and Lavender is excited to have this incredibly talented individual onboard. We asked Brett a few questions to get to know him better.

Tell me a bit about your background: where you’re from, where you went to school, etc.
I grew up in Andover, Minnesota, which is a mid-size suburb north of the Twin Cities and then went to Winona State University where I graduated with degrees in Public Relations and Theater. I love traveling as well, mostly to cities. I’ve never been a vacation person who sits on a beach for a week, that’s not fun for me. I want to see, do and experience, which is why I almost always go to New York for museums, food and, of course, Broadway. When I’m not working or seeing a show, I’m usually with my golden retriever who sucks up most of my attention!

What got you into the world of theater?

I always like to say that my interest and love for theater was a happy accident. It started when I was in grade school. I realized that a ton of my classmates weren’t in the room one day, until someone told me that they were performing for other classes in the cafetorium. I auditioned for the spring show because I wanted an excuse to miss class too! Then it just snowballed from there and I wanted to do it every year because I genuinely enjoyed it.

I was lucky to go to a high school that had a wonderful theatre teacher who really created that safe space for us after school. A lot of us were really close, and I’m still dear friends with some of those people I shared the stage with in high school.

It was in college where I really dove into the world of theater outside of acting. It was there that I studied every form of it from acting, history, performance and even technical theater including lighting, sets and costumes. I think that background is why I bring such a unique perspective in my writing, I have first hand experience in it.

What are some of your favorite live shows you’ve seen?

I get this question a lot, or some sort of variation of it, and it’s so hard. I’ve had the pleasure of seeing a lot of live shows both here and in New York. There are a lot of shows that are truly special to me for various reasons. Sometimes it’s a memorable show just because you had the chance to see a specific performer in it, or other times it’s because it’s maybe a world premiere. One of the best experiences I’ve had in a theater was seeing Bette Midler in the recent revival of Hello, Dolly! And then seeing the touring production with Betty Buckley.

Others would include Moulin Rouge on Broadway, a production of Hand to God at the Jungle Theater and Indecent at the Guthrie Theater. I also saw Hadestown last year and I can’t wait to see it again when it tours to Minneapolis. I would say Indecent was by far one of the most beautiful plays I’ve ever seen. The set was stunning, the performances were enchanting and the story itself was so heartbreaking yet inspiring.

Does your passion for performance end at theater, or are you a movie/TV/music junkie as well?

Oh no, it spans across the entire entertainment industry. If you name a streaming service, most likely I have it. For me, it doesn’t matter what the form is, whether it’s a movie, a TV series or even a video game, which I enjoy a lot as well. I look for a story. If there is a story there that is keeping me interested and characters that I feel and care for, then I’m down for it. I recently finished a game called The Last of Us and I think I cried a little at the end because it had exactly what I wanted. The game itself was fun but the story and the two lead characters kept me hanging on until the credits.

How excited are you to write for Lavender‘s art coverage?

I’m beyond thrilled! I’ve been writing independently on my own website for years and it’s such an amazing opportunity to now have my writing reach so many more people through Lavender’s network of readers. If you asked me five years ago if I’d ever be writing professionally, I wouldn’t have thought it was possible. I’m can be humble sometimes, but at the same time everyone deserves to pat themselves on the back. I’ve worked very hard to get where I am and I’m ecstatic to be writing for Lavender.