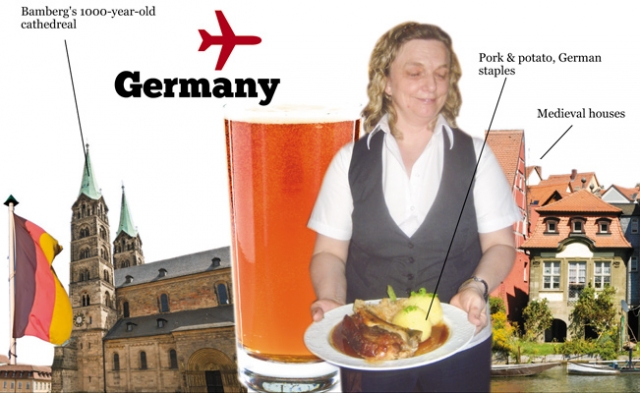 Just off the 9 a.m. train, I’m heading for Max Platz (okay, Maximilian, the ruler whose statue oversees Bamberg’s open-air living room) where already an oompah band is huffing, a bratwurst stand is grilling at full speed, and picnic tables are weighted with German burghers hefting mighty steins. What gives?

It’s Bamberg’s annual Beer Day, April 28, and the party’s underway. All nine of the town’s breweries are pulling spigots, and the lines are long. A brochure presents a self-guided beer trail, where each centuries-old establishment includes a dining hall that celebrates hefty, time-tested German fare.

Grab a seat at Spezial, since 1536 fermenting pilsner, lager, marzen, and more. No need for a daily paper: Here, at a communal table claimed by regulars, is where the news is spread. Helga, in her dirndl, delivers platters that would make a weight-lifter blanch: schnitzel with potato salad, pork hocks with potato dumplings, bratwurst with kraut. And beer.

Fortified, I set out along cobbled streets to get to know the town, founded in 1027, a trading mecca ever since, and now a UNESCO heritage site, left blessedly undamaged in the war. The Town Hall, aside a rushing river, sports murals like medieval billboards. Climb the steep hill behind it, lined with antiques shops and sidewalk pubs, to the formidable cathedral of 1012, celebrating 1000 years of piety (never mind the witch burnings). Inside, it boasts two altars—one for town and one for gown, the clergy, guarded by the famous Bamberg Rider, a lifesize sculpture from 1230 of a horse with (folks think) Stephen of Hungary in the saddle. Behind this Gothic majesty unfolds a courtyard framed by medieval half-timbered buildings, prized as a movie set (Three Musketeers).

Then it’s time for more, ahem, beer. We head to Brewery Fassla for plates of spaetzle noodles and another go at the national culinary icons, pork and potatoes.

Regensberg, a two-hour drive through Oz-bright fields of gold, is another undamaged UNESCO gem earning its title as “the medieval wonder of Germany.” Its spot on the roaring Danube, spanned by a stone bridge since 1106, made it another trading op, studded by 20 medieval towers, erected by social-climbers to demonstrate their wealth. Between them hide remains of Roman times. And memorials to the Jews. 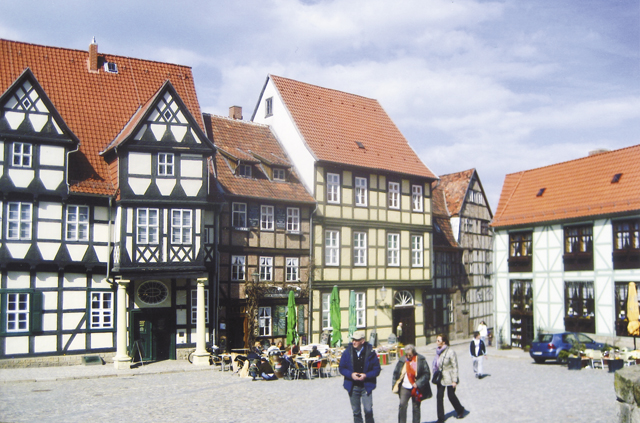 On the platz beside the once-Catholic, then post-Reformation, Lutheran church is a stairway revealing the underground remains of 40 Jewish houses, destroyed in 1590. Memorializing Jews lost to the modern Holocaust, the platz bears outlines where the synagogue once stood—squat pillars, like oversize marshmallows, rising in remembrance. Down a nearby lane, a quick eye may detect the plaque dedicated to citizen Schindler, hero of the “List.”

Regensberg is the Pope’s hometown, too (his brother still teaches music here), and home to a more worldly potentate, whose family erected a 500-room castle, open to tour, not far from the landmark stone-lace spires of the Gothic cathedral of 1274, framed in jewel-hued stained glass.

But don’t forget the beer. We lunched at Brewhouse Dicker Mann, which, we learned the hard way, means “Fat Man.” Backing the boast were platters of roast duck, roast pork, and, oh joy, my favorite food in all Germany—spargel. That’s the magic word for spring’s homage to white asparagus, thick as Lincoln logs, served with boiled potatoes under a river of Hollandaise.

Later, at Danube-side picnic tables, we raised a stein to salute buns heaped with sauerkraut and bratwurst smoky from a wood-fired grill. Then on to more serious eating at Brauerie Kneitinger and another round of pork and potatoes and beer, from dark to palest gold, delivered by Valkyries of superhuman strength. Then, a nightcap at cosmo, clubby Hab und Gut, proof that these UNESCO towns aren’t carved only in heroic stone.

Tiny Quedlinburg calls itself “the cradle of Germany,” a living homage to the Middle Ages boasting over 1,300 half-timbered houses. And there they stand, sporting their trademark crosshatched timbers—houses from the 15th, 16th, 17th, and 18th centuries side by side like an architectural tutorial, and rising above them all, a formidable cathedral-cum-convent, where, for 900 years, holy women of strong minds led the town. Trundle back to the vivid market square, where a narrow alley takes you to an unlikely serendipity, a museum dedicated to the painterly planes of Cubist Lionel Feininger.

From Quedlinburg’s mighty fortress to “A Mighty Fortress Is Our God:” We’re off to Lutherland. Soon we catch sight of Eisleben, where Martin Luther was born, baptized, became a monk, and died, almost mid-sermon, in the pulpit where we’re standing. Following pavement medallions, we tread the Luther Trail, past the town square where his statue presides—one hand holding a Bible and the other crushing a Papal edict. “Think for yourself,” Luther taught, and Pope Clement was not amused.

Two hours further on, the trail heats up in Wittenberg, where Luther actually lived most of his life. Looking out my window in the cozy Alte Canzley, a  hotel for a hundred years before Martin arrived, I spy the famous door of the University Church where he nailed those 95 edicts. (He’s buried inside.)

The town church, where he preached to the masses, lies behind the market square (another statue). Over the altar shines a glorious painting by his friend, Lucas Cranach (yes, that’s Martin himself alongside Jesus at the Last Supper.) Visit Cranach’s mansions, too. As a printer also, he made a fortune by publishing Luther’s translation of the Bible—the first time ever folks could read the holy book in their own language. It became an instant best-seller. Luther’s own house was a converted monastery where he and wife Caterina, a former nun, boarded his many students. Walk through his living room, spy the notes he scribbled into book margins, admire the famous portrait Cranach painted.

At the House of Handcrafts, today a modern café heading the Slow Foods movement, we dined, as Martin might have, on schnitzel and spargel. With a glass of bubbly sekt, we toasted Wittenberg’s boast: fueling the everyman-centered Reformation, “Modern times started here.”

To construct your own visit, contact the German National Tourist Office at www.germany.travel.

Check out Gay Games, the Gay Museum and Memorial in Berlin, and more.