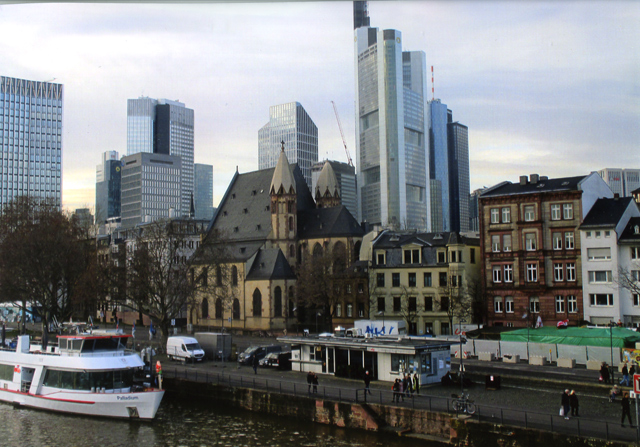 I’m happy (okay: thrilled) to be back in Germany, eager to tread the cobblestones of cities rich with history, churches ablaze with precious art, and cafes piled with beer and sausages: the Germany of my dreams.

But this time, as my plane lands in Frankfurt, I’m not heading straight for the train station to whisk me straight away to those winsome destinations, without first exploring what this high-energy city has to offer. Skyscrapers punching the clouds line the city’s River Main (thus the nickname Main-hattan). With Brexit looming, it’s rumored to become next London, epicenter of all that matters.

That pretty riverbank is lined with one fascinating museum after another, starting with the Stadl, home to bold-name painters from Rembrandt to Fra Angelico, Renoir to Andy Warhol. The smorgasbord continues with museums celebrating communications, architecture, film, Orthodox icons, and more.

Behind those treasuries lies Sachsenhausen—Main-hattan’s Brooklyn—home to cozy dens serving its famous apple wine (and brats and dumplings) and indie shopping lures. Then climb the bridge to transport you to Old Town (yes, Frankfurt is not all bank towers) and its storybook centerpiece, Romer Square. Applaud wedding parties emerging from City Hall, then trace your way to the nearby Historisches Museum, detailing Frankfurt’s history, told via 100 objects (typewriter to Nazi gas canister). Explore the lacy spires of St. Bartholomew Cathedral via a newly-minted street recreating pre-bombing artisans’ shops, or the futuristic Saalgasse, housing Seuss-like architectural fantasies.

Circling those skyscrapers, you’ll discover a green ring of parkland blooming where Napoleon destroyed the former city wall. Within it lie icons like the house of homeboy poet Goethe, the effervescent city market, and scads of pedestrian shopping streets, from classy Goethestrasse (Dior, Chanel) to everyman’s Zeil, lively with the likes of Zara.

I surveyed the scene from my room high atop Hotel Jumeirah, owned by the sheik of Dubai, who doesn’t pinch pennies to please guests (think: full-service spa—sauna to massage—whose elite products also resided in my bathroom, bigger than my hometown condo). German artworks shine throughout, along with goodies made from the rooftop’s honeybees.

And fueling Restaurant Max, where breakfasts boast hearty German favorites plus Middle Eastern fare. Evenings, it’s transformed into an elegant retreat, where I relished a creamy chestnut soup mined with smoked duck breast, then more duck, roasted with apple, cabbage and potato dumplings, served with apple-date chutney and lingonberry sauce. Yes, I saved room for dessert, because it celebrated chocolate.

An early-morning train trundled me to Leipzig, called “the music city.” Music came before the Soviets, who ruled this East Germany town after World War II—and we’ll get to that fascinating bit of history in a minute. First, back to Bach.

Admirers’ flowers spill over his gravestone, inside St. Thomas Church, where visitors often may catch a concert. Bach’s statue surveys the scene out front, and across the street beckons the Bach Museum, which relates the story of how he became cantor of this very church in 1723 (not to the entire satisfaction of the building’s elders, whose first two choices turned down the job).

It was his task to train the boys’ choir and oversee their dorms; to publish and sell books; and, by the way, to compose a new cantata for virtually every Sunday service. The museum boasts the organ he played; music in the master’s handwriting; and his many portraits.

Then head to Mendelssohn Haus, where composer Felix lived, composed, and incidentally, painted the lovely water colors on display, while serving as the famed Gewandhaus Concert Hall’s conductor. Visitors can direct an electronic ‘orchestra’ onsite, choosing variables such as tempo, volume and even venue. (Note to self: My performance on the podium indicates it’s wise to keep the day job.)

That famed Gewandhaus anchors a vast plaza turned by the Soviet GDR (German Democratic Republic) into a cityscape of dismal architecture. The site’s beloved University Church? The Soviets dynamited it on a dark night in 1968. It’s recently been reconstructed—slightly off-center as visual testimony to the tragedy.

St. Nicholas Church remains undamaged, however. During the bleak GDR years, citizens gathered here each Monday in peaceful protest. Then, on a fateful day in 1989, they marched for freedom—70,000 brave folks, with Soviet guns trained on them. It was the beginning of the end: Word spread fast throughout East Germany, and the Berlin Wall tumbled down. Credit Leipzig!

Today the story of those GDR years is remembered in the Forum of Contemporary History, detailing everything from rigged elections and censorship imposed by the Stasi (secret police), to their secret prisons, and what locals called “Socialist queues” while lining up to (maybe) gain a rare pound of coffee.

The MdbK—the city’s art museum—showcases treasures from Cranach’s divine “Adam and Eve” on through Leipzig’s Impressionists, then Max Beckmann and other painters the Nazis deemed “degenerate.”

Dine—you must!—in yesteryear’s Auerbach Keller, where servers in red vests deliver impossible portions of homey classics, from potato soup to pork knuckle and sauerbraten, just as in centuries past to patrons like Martin Luther and Goethe, whose statue testifies his satisfaction. Or whisk yourself to the top floor of the skyscraping Panorama Tower for a vista with modern eats like pork fillet with kale and polenta or fish aside risotto.

Leipzig, as does most of Germany, boasts a lively GLBT scene. In fact, it hosts Germany’s biggest gay sauna, Stargayte, which includes a cinema and bar, open from Friday straight through to Monday. Or opt for the colorful party series “No, No, No!” melding a children’s birthday party vibe with a big-city gay scene. Queer night at “KissKissBangBang” is held at Club Twenty One every second Friday. 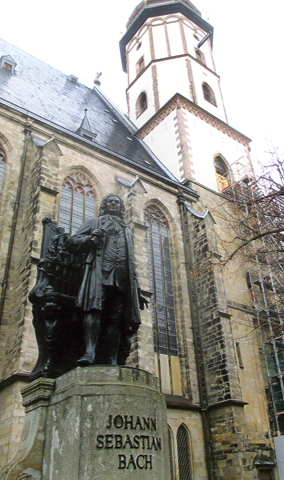 A statue of Johann Sebastian Bach oversees the square outside the Church of St. Thomas in Leipzig, Germany.

The next morning’s train delivers me to Nurnberg, luring travellers since 1050—renowned for events both festive and somber. It’s where Wagner’s opera “Die Meistersinger” is set, and also served as center of Hitler’s Nazi empire and the ensuing post-war trials. But its Christmas Market, one of Germany’s biggest, is a far happier tradition, with close to 200 stalls overseen—not by Santa, but by a pretty angel, the city’s symbol and bringer of children’s gifts.The rest of the year, a bounteous food market fills the square, punctuated by the Beautiful Fountain—a shimmering spire to touch for good luck. It’s the frontispiece for Frauenkirche Church, where, at noon, tiny figurines of burghers paying homage to the emperor parade under the clock. Nearby 13th-century St. Sebald’s houses an ornate silver shrine under glowing stained glass windows, while also-13th-century St. Laurence hosts an illustrious carving of the Annunciation.

Precious artworks like these were hidden in bunkers beneath the town’s hilltop castle (open to visit) during the war years. Today the German National Museum is home once more to these priceless treasures, including paintings by homeboy Albrecht Durer (whose house tourists can visit), along with those of Cranach, Rembrandt and more. Don’t overlook the smartly modern Neues Museum beside it, with an exhibit devoted to products designed in both East and West Germany of the Fifties: typewriters, sewing machines, kitchenware. Plus a giant sculpted gorilla. And another sculpture of toilet paper rolls.

The Toy Museum offers a secret indulgence for grown-ups, for Nurnberg was famed for its toy production. On display: battalions of toy soldiers, miniature railroads, dolls almost as old as the town itself, plenty of teddy bears.

Bordering the train station, a Crafts Village showcases artisans at work as well as a coffeehouse and bratwurst ops. Yes, I indulged. But I saved room for dinner at Steichele, serving hearty German specialties since 1892 and a proud promoter of the Slow Food Movement. Glistening goose for me, though it famous carp was sorely tempting.

Another train ride whisked me to Wiesbaden, a genteel spa town hugging the Rhine River. It’s pleasantly “undiscovered” by most American tourists, but the town’s Roman founders knew a good thing when it bubbled from the ground. The city boasts dozens of thermal springs fizzing up from fountains, including those of Kaiser Friedrich Thermal Bath, an Art Nouveau wonder which welcomes visitors.

First, a breakfast stop at Café Maldaner of 1850, whose owner cries “Wilkommen!” to all who pass through the door. Pause to admire the pastry case’s lineup of fancy cakes that augment its coffee menu. “It’s the first Viennese coffeehouse outside of Vienna,” a guest explained as career waitresses in crisp white caps delivered a breakfast mélange of ham, cold cuts, cheese, pickles, tomatoes, sweet breads and eggs.

Well fed (in Germany, that’s simply table stakes), I headed off to peer at the remains of Roman walls and statuary amide the pedestrian-only shopping streets and red-brick churches, on my way to the city’s museum—half natural history and half art. And what art! Art as in Art Nouveau: graceful, curvy furniture, sinuous lamps and chandeliers, and paintings of wistful maidens. But time didn’t halt a hundred years ago. The museum also boasts an exciting showcase of bold, modern German paintings.

Near it glows the Kurhaus of 1907—the city’s landmark and center of its social life. Its elite casino—all polished wood and chandeliers—adjoins a theater and a cozy restaurant, where I enjoyed a wintertime feast of roast goose, potato dumplings, baked apple, chestnuts and red cabbage.

Wiesbaden’s food scene continues at the summit of Neroburg, a forested hilltop overlooking the city, where a Russian Orthodox chapel bearing five golden onion domes guards a host of precious icons. Along the path lies Wagner in Opelbad, a restaurant since 1869, with unmatched view and menu: creamy chestnut soup, pate and chocolate mousse for me, salmon for my companion. And champagne.

Sekt, rather, as it’s named in Germany—sourced from the nearby cellars of Henkells, open to tour and taste. Then on to Kunder, producer of fancy chocolates since 1889 and said to serve the best hot chocolate in town. Among its tasty wares, choose Teufel (“devil”) chocolates encasing pear liqueur or Venus, harboring chili inside.

So, blame it on Venus, or the Devil: I’m hooked. I’m already planning a return visit. To chart your own, see www.germany.travel.