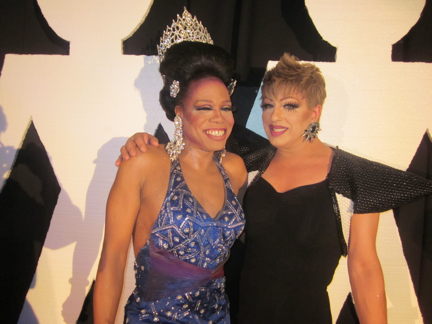 On the evening of June 27-28 (appropriately enough, the anniversary of the 1969 New York City Stonewall Riot in which drag queens played a major role), perennial titleholder Geneva Richards won the Miss City of the Lakes Pageant at the Gay 90’s La Femme Show Lounge. She emerged on top of a field of 12 contestants with her talent number, a flawless rendition of Tina Turner performing her smash-hit cover of “Burn Baby Burn (Disco Inferno).” La Femme Show Director Nina Di Angelo emceed the pageant.  Richards, who captured the Miss Gay 90’s crown last October 25, is the only female impersonator ever to reign concurrently with that title and now as Miss City of the Lakes. The pageant debuted at the now-defunct Cloud 9 bar in Minneapolis in 1987 and subsequently took place at other now-defunct local bars, but the Gay 90’s has hosted the event since 1995.