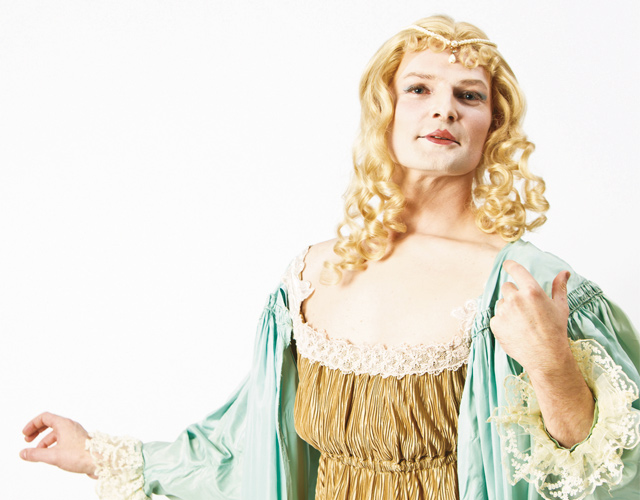 Local playwright Jeffrey Hatcher’s 1999 historical masterpiece, Compleat Female Stage Beauty, is one of the best plays ever written about life in the theater, not to mention that its insights about gender and sexuality are mind-blowing. It was also made into a powerful 2004 film titled Stage Beauty for which Hatcher wrote the screenplay. Oddly enough, CFSB has never been produced locally, though it has enjoyed successful productions elsewhere.

Thankfully, Hatcher’s Restoration period gem will finally be staged because of the first-rate small theater company, Walking Shadow, at the Theatre Garage. Thought-provoking producer/director John Heimbuch enjoys the challenge with CFSB‘s “very specific historical period with lavish costumes, makeup and wigs, big cast, and an intricate story that requires very careful staging with special focus on recreating historical acting styles and staging. We were drawn to its themes of performance and identity in the context of a historical era. It just happens to be a favorite theme of Walking Shadow and mine, in particular.”

Historically, Americans of today’s Citizens United era might generally relate to the mentality that leads up to CFSB’s conflict, given the discombobulating influence of the Christian Right/Tea Party/Corporatist coalition on American politics. In 1642, at the onset of the English Civil War, aka The Puritan Revolution, zealous Puritan militarist-politician, Oliver Cromwell, closed the theaters. Puritans stigmatized playhouses as havens of vice, sin, and permissiveness that could open the floodgates of the imagination, on a par with whorehouses. Up to this time of theater closings, women had not been allowed to act on the English stage, therefore men portrayed the women’s roles. (Indeed, this cross-gender aspect would have surely repulsed Puritan sensibilities.)

In 1661, when Charles II returned from exile on the continent, the monarchy was restored, hence the beginning of what’s known as the ‘Restoration Period’. The theaters were re-opened after two decades, and thanks to Charles, the ‘men on stage only’ rule that had been the order of the day before Cromwell’s edict, was done away with. (Recall that Shakespeare productions during his lifetime had all male casts.)

Thanks to Charles II, women could now act on public stages. The term ‘actress’ came into usage. It was not only a shift toward greater equality between the genders and a new socio-economic opportunity for certain women, but a shift toward a more realistic theater.

But for every political gain there is a loss. And that loss was felt by men who had built careers on playing women’s roles and had kept in practice beneath the radar during the Puritan era. CFSB, imagines how Edward ‘Ned’ Kynaston, one such actor who actually did exist and enjoyed great success, might have come to terms with this socio-gender upheaval. Diarist Samuel Pepys wrote that Kynaston was “the prettiest woman in the house” and “the handsomest man.”

Wade Vaughn, who plays Kynaston, sees him as “a man who has devoted his entire life to perfecting the ‘stage beauty’. So much so, that all of his power, his celebrity, life and future on the stage, is dependent upon his ability to be convincing as a woman. Unfortunately, he has to assume the character off stage as well. The King (Erik Hoover) remarks ‘I don’t make the distinction between the part and its player’. Two upper class ladies (Anika Reitman and Katie Kaufmann) ask him out for a stroll after his performance on the condition that he keep his ‘appearance as is’. His lover, the Duke (Gabriel Murphy) can only make love to him as ‘Desdemona’ (the doomed wife of Shakespeare’s Othello), his entire life must be turned over to the ‘woman’ he has created. But it’s also his source of livelihood and his art. I think it’s this devotion to what he’s accomplished that allows Ned to live in this arrangement.”

Unfortunately, as Vaughn observes, “when the King outlaws male actors playing female roles he’s left without a job and really without an identity. The Duke offers Ned the advice to ‘change what you do…what we do is what we are, take that away and what are we?’ How can we truly be ourselves if we’ve been defined by what we do? And how can we make a break from something that was, in essence, us? Should we have to? Ned’s Desdemona is still Ned. If Ned played Romeo, would that suddenly make him a man? In history Ned did play male roles, and quite well, but in our play he says ‘there’s no artistry in playing a man’. Ned doesn’t see ‘Man’ and ‘Woman’- he understands there has to be a duality in order to understand either sex, at least as far as acting is concerned. He tells Samuel Pepys (Matt Sciple) ‘you see a man through the mirror of a woman through the mirror of a man – take one of those reflecting glasses away and it doesn’t work.’ So the challenge for me has been to navigate these contradictions with Ned. We are a society that is all about labels and definitions and I can’t imagine I’m the only one who’s ever asked themselves ‘who am I?'”

Jane Froiland plays the actress who essentially usurps Kynaston’s position. She says “we know that Margaret Hughes broke through what was arguably one of the first glass ceilings in existence to become the first stage actress in England. However, in this play Margaret imitates the ‘actresses’ that came before her, making her a woman imitating a man playing a woman. Or as I’m calling it, fun house mirror acting. Ironically it takes the coaching of Kynaston, the man she replaced on stage to help her let go of her ‘womanly’ affectations and simply be a woman. In a larger sense, I think that’s what the play is really about, the breakdown of illusions in favor of becoming who we really are.”

Surely, the King’s return and persona set the tone for change after two decades of Puritanism. Hoover reflects “Charles has just been crowned, so I think there’s an exuberance at court and in London that infuses him, but I think there are some political forces at work that probably influenced Charles’s decision. He’s definitely possessed of a keen political intellect despite being a bit lacking in artistic sensibility. Sure, Charles is a mercurial spirit and I think a large part of his decision is born out of a desire to experiment and rebel against established societal and political forces, but it certainly helps him in other ways by keeping his political foes off balance. He’s not a Machiavellian character, however, because I don’t think he sees Nell Gwynn (Adelin Phelps) -whom I think he genuinely loves- or Margaret Hughes as pawns. Being King is a game to be played on many levels but he doesn’t play maliciously.”

Hatcher reminds us that just because we live in a Post-Sexual Revolution period, we still have much to gain by inquiring into sexual and gender history of centuries past. So next time you insist that the term ‘actor’ be used as a gender-neutral term for men and women on stage, consider that the term ‘actress’ represented a seismic shift for women’s right to self-determination. Not to mention, that centuries before today’s drag queens, male actors manifested female personae with a scrupulousness that disturbed puritans just as much as trans folk and drag queens beguile puritanical types now.