Putting The ‘Gay’ In Games 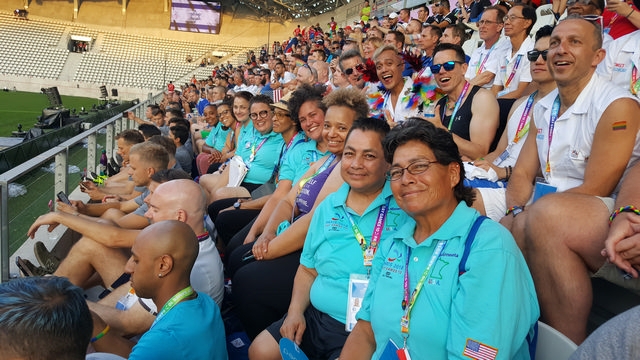 Members of Team Minnesota were present for the opening ceremony of the Gay Games in Paris. Photo by Signe Harriday

Minnesota athletes win big at this year’s Gay Games in Paris from Aug. 4 through Aug. 12.

Every four years, some of the world’s best GLBT athletes come together to compete in the Gay Games and to celebrate a competition that is dedicated to advocating for diversity and inclusion. Athletes come from all over the world to compete in a variety of sporting events, and this year was one Minnesota will never forget. The Bold Northers who represented Minnesota at this year’s games in Paris included Paul Mittelstadt, who won silver in the triathlon, and the Subversive Sirens, a synchronized swim team that won gold.

Mittelstadt grew up on a farm in southern Minnesota where he says the main form of physical activity was farm work, and a lot of it. Because his father kept him busy with work on the family farm, Mittelstadt said he had little time for recreational activities or sports in high school. Now, Mittelstadt is letting out some of that athletic energy.

“When I was 39, I decided I wanted to do my first sprint triathlon, which is half the distance of a regular triathlon,” he says. “Since then, biking has become my favorite year-round sport.” 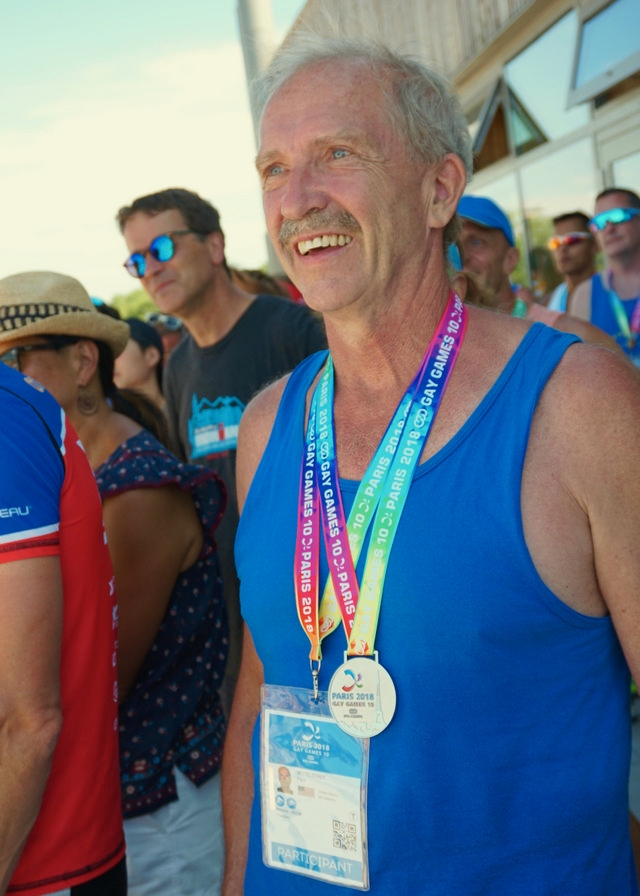 Paul Mittelstadt proudly represented Minnesota by winning the Silver medal in the triathlon at the 2018 Gay Games in Paris. Photo by Linda Tavis

“It was nice to attend and finish second at the Paris Gay Games with family and friends waiting at the finish line, each with red pompons greeting me as I finished,” Mittelstadt says.

In total, there were more than 90 participants in the triathlon sprint and 189 in the full triathlon, Mittelstadt included.

“It was 93 degrees the day of the event. The swimming went well as the water felt good. The biking went well also because the breeze felt so comfortable. The running in 93 degree temperature was exhausting and felt better when it was done,” he says. “Being the second oldest participant in this event, I was glad to still be able to finish. Another person I did most of my running with was five years younger. He and I had time to share our stories.”

Mittelstadt says the Gay Games truly promote inclusion as they are participatory rather than competitive to encourage unity among participants.

Founders Signe Harriday and Suzy Messerole decided to create Subversive Sirens when Harriday revealed that it had always been her dream to participate in the Gay Games. Soon, the team was formed, including members Tana Hargest, Zoe Hollomon, and Nicki McCracken, and the mission of the team was determined.

“We are aware that there exists a mainstream narrative that excludes black and queer folks all the time, and that includes synchro—a sport that centers (on) whiteness and a certain body type. We love our bodies, and we’re saying that one body type or style isn’t more important than another,” Harriday says. “Stereotypes seek to narrow our imagination and limit what we think is possible about other people. We are breaking stereotypes so that there can be more room for people to be free. That is why Black Liberation is central to what we do.” 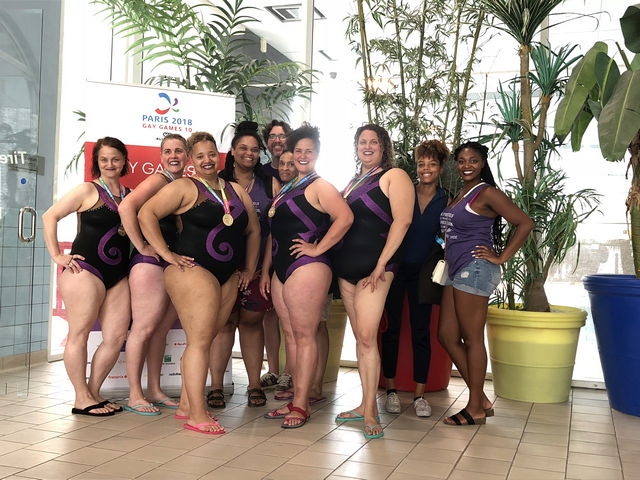 The Subversive Sirens synchronized swimming team won the Gold medal at the 2018 Gay Games on behalf of Minnesota. Photo courtesy of Nicki McCracken

Harriday says the definition of subversive is “seeking or intended to subvert an established system or institution”, which for the Subversive Sirens means dismantling white supremacy and other systems that seek to silence minorities.

“We triumphantly denounce those notions and systems. We are swimming our way into liberation with joy,” Harriday says.

All five members of the team participated in the routine that won the Subversive Sirens gold. Harriday and Messerole also won silver in their duet performance, which included a technical routine and a free artistic routine.

Messerole says the Gay Games are meaningful to the Subversive Sirens because they offer an atmosphere that is accepting of everyone and celebratory of both sports and the GLBT community.

“Being in the water with other queer synchronized swimmers from around the world was like bathing in the waters of love. Athletes cheered for each other, supported each other, made space for each other (literally, in warm ups) and championed everyone’s success,” Messerole says. “Whether it was welcoming first time competitors—like us—or swooning over a duet by two Olympic caliber swimmers (men who should have competed in the Olympics but were banned because men aren’t allowed to compete in synchronized swimming at the Olympic level)—this was a place of joy.”

For more information about the Gay Games, visit gaygames.org.