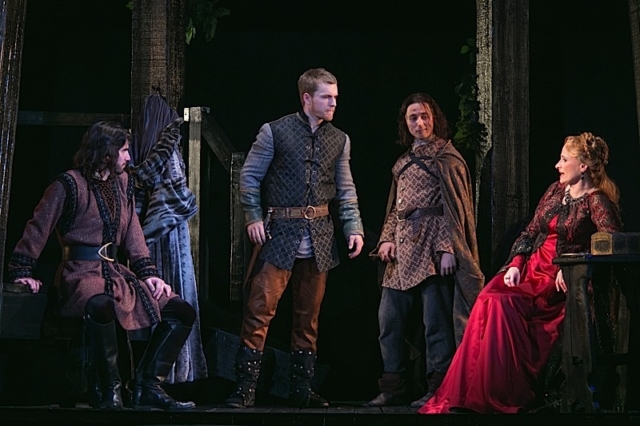 For an ideal example of the Guthrie Theater’s legendary classical style, catch The Lion in Winter. It is also a nice choice as an atypical Christmas season play. James Goldman’s 1966 comedy is a clever blend of the textures of the 12th century English royal lifestyle and a mid-20th century nuclear family. Moreover, the production elements, from the technical to the acting, portray that blend to engaging effect. The action is set in the period but at times it sounds very much like a white middle class family of decades not long past. Not to mention it is a very funny production.

King Henry II is a man who exerts his absolute control in the way that comes as natural to him as breathing. He decides to be briefly benevolent and allows his wife, Eleanor of Aquitaine, out of her prison abode to spend Christmas 1183 with him and their sons. Of course it’s all for political reasons. Kevyn Morrow and Laila Robins give strong performances as the clashing royals. 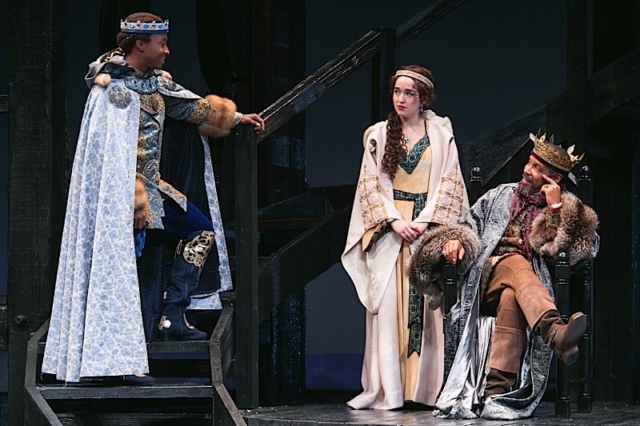 However, it is the play’s four younger men who give the show a real sense of vibrancy. The couple’s three spoiled sons fixate on a shamelessly competitive thirst to seize the throne: the gutsy Richard the Lionheart (Torsten Johnson), the infantile John (Riley O’ Toole), and the intellectual Geoffrey (Michael Hanna). Mixed into this is young French King Phillip (David Pegram), not to mention a saucy gay subplot which absolutely delights. These four young actors excel in their roles.

The turntable set by Beowulf Britt and Christopher Ash spirals majestically with a woody hunting lodge muscularity. Period costumes by Karen Perry are gorgeous and richly detailed. Kevin Moriarity has directed The Lion in Winter with a comedic pace that relishes the wit, and a clear sense of the late medieval period. Quite entertaining and easy on the eyes.