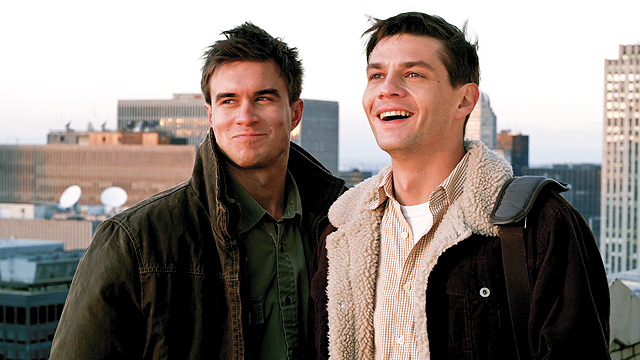 Seldom has gay love in film been this masculine. Seldom has such a masculine and intelligent film had the juice for what it takes to actually reach out to a mainstream audience. If the marketing at Lionsgate puts its full force behind it, Burning Blue could be a box office smash even in mid-size American cities and among that vast layer of American men who seem to only be comfortable with action films and ESPN. Seldom has such a masculine film’s original source come from a stage play. Though Burning Blue isn’t exactly an action film, it’s got all the testosterone and virility of one. Yet, it courageously penetrates tectonically deep emotions seldom mined in masculine films, but action lovers will love it.

Burning Blue is inspired by the experience of its US Naval Academy graduate playwright, D.M.W. Greer. As a play, it was a 1995 smash on London’s West End and won an Olivier. For those who don’t know, the West End and the Olivier Award are the equivalents of New York’s Broadway and Tony Award. Though it had a smash run in Los Angeles the following year, it didn’t play New York until 2002 and, although audiences and critics loved it, it never transferred from Off-Broadway to Broadway. In 2008, Greer and co-writer Helene Kvale co-wrote their electrifying screenplay of the drama but it wasn’t completed until 2012. It played the festival circuit the following year and is finally out in movie theaters. And it’s remarkable.

The narrative centers on a 1990s government investigation by agents when Don’t Ask Don’t Tell (DADT) had swung into effect. Some fatal accidents have occurred related to an aircraft carrier. Four naval pilots are under suspicion and the agents also suspect these men are gay. Dan (Trent Ford) is secretly gay and Will (Morgan Spector) is his straight pilot buddy. Will is fully unaware of Dan’s homosexual aspect and they bond in the emotional way that many men bond in the military and in sports, that proverbial male bonding that includes deep friendship and honor codes, which is automatically assumed to be between heterosexual men.

Agents Cokely, a white homophobe, and Jones, a black homophobe, played to chilling effect by Michael Sirow and Chris Chalk, are reminiscent of vice squad cops programmed to project homosexual intentions where they simply don’t exist. The question of whether they are surveilling or stalking is a piercing one that resonates in light of recent NSA revelations and in the way both men seem to relish their work a bit too much. Remember, too, that at the time of Burning Blue, witch hunt conservative Christians Ken Starr and John Roberts were clearly fascinated by President Clinton’s heterosexuality.

When Cokely spies Dan and fellow pilot Matt (Rob Mayes) dancing in a gay club the assumption is that they must be gay, although their partnering there is no different than what would be socially acceptable if it were two women. And for those who have ever gotten hot and heavy on a dance floor, man to man, Dan and Matt, are pre-vanilla. Yet, this sets off Cokely. 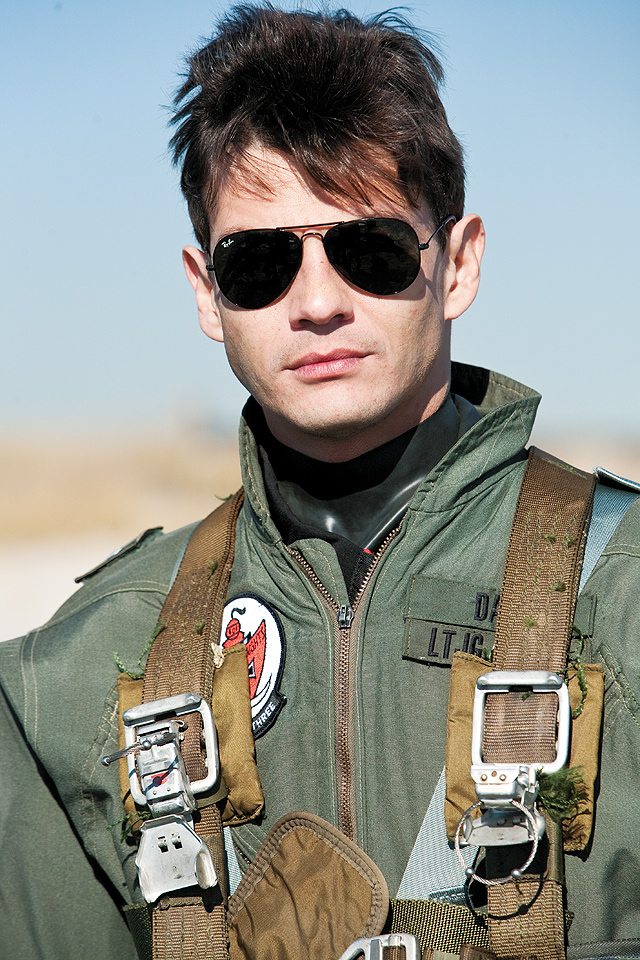 Nonetheless, both agents have the lingo and the special ops-style indoctrination to swiftly unsettle anyone in their path, whether it’s Will, Dan, Matt, or Susan, Will’s empathic devoted wife (an exquisite Tammy Blanchard). But Cokely does meet his match in what may be the most delicious skewering of a homophobe in film by pilot Charlie, played by the dazzling William Lee Scott. Cokely tries to get him to talk smack about his pilot brothers in the locker room. Need I say more?

Burning Blue puts forth something that many do not yet realize: straight military men who have never had sex with a man and their non-military wives could/can still be targeted and have their lives destroyed by false insinuation and innuendo. In the case of Matt, who actually is gay, its a matter of breaking him during interrogation, inducing guilt and shame, and making him doubt himself and insinuating he is that worst of worst: a traitor.

Cinematographer Frederic Fasano, editor Bill Henry, and Greer, who actually directed the film, have ingeniously captured subtleties, nuance, and subliminal gay emanations that the numinous and intuitive cast has spirited forth. It’s perhaps the most revealing look into the correlation between uber-masculinity and homosexuality in American cinema.

In our time of shooting rampages and adolescent action films, it’s easy to denigrate masculinity in movie men of action. And it’s understandable and, sometimes, even reasonable. But in the column of thoughtful films that appeal to hyper-machismo, it’s good to acknowledge the insights of pictures like Savages, Jack Reacher, End of Watch, and now, Burning Blue. In the column of great military film classics, Greer’s picture ranks alongside The Caine Mutiny and A Few Good Men.