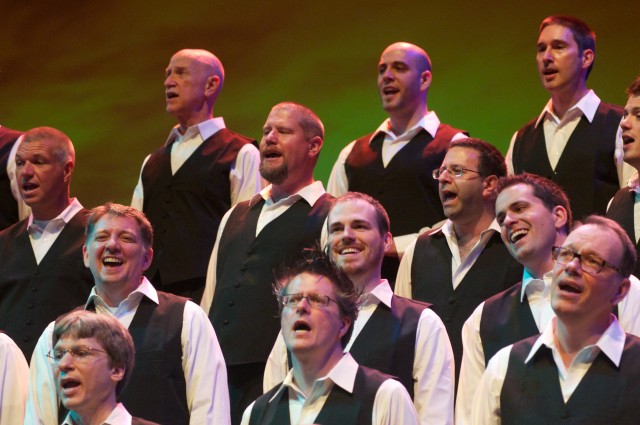 “You are the sunshine upon my soul,
Rays of hope that make me whole.”

lyrics from You Are… by Dean Genth, music by Michael Shaieb

For their spring performance, dubbed RE: Generations, the Twin Cities Gay Men’s Chorus (TCGMC) reflects on two timely topics at the Ted Mann Concert Hall: love between two men married to one another and how gay men respond and react to the ageing process.

Act I will feature the world premiere of You Are… – lyrics by Dean Genth and composed by Michael Shaieb. Genth has actually underwritten the piece in honor of his husband Gary Swenson’s recent 50th birthday. The couple lives in Mason City, IA where their marriage is legally recognized.

Here’s an excerpt from the letter Genth read to Swenson: “In order to express my love and admiration for you I have commissioned the composition of a love ballad written by Michael Shaieb and set to lyrics written by me. The poem, You Are… was inspired by you and represents the magnificent change you have wrought in my life.”

Act II is a humorous look inside a gay men’s chorus’s rehearsal period. Shaieb and book writer Brent Lord were tasked by Dr. Stan Hill and the TCGMC to create a piece that addressed ageing in the gay community and how the different decades relate together. Out Of My Range (and Other Age-Related Performance Issues) promises to be both whimsical and thoughtful. 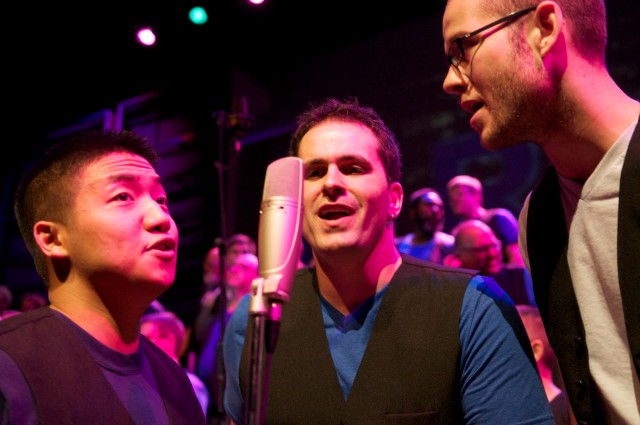 Shaieb shares “I’m turning 50 in a month and I found I had a lot of feelings on this topic! We thought about how the young can, of course, gain wisdom from the old, but the old can also regain spontaneity and vitality from the young. But we also saw that it’s too easy to let age become a source of division, especially when youth and outward appearances are prized in our culture.”

Shaieb continues “getting older is inevitable, so what else could be said about ageing? We saw the question as basically two choices: we can either grow old alone or we can grow old together and gain from sharing in others’ perspectives. There is a parallel between growing older and wiser and better in life with the growth that happens in every TCGMC concert rehearsal period. You can sing alone in the shower if you want, but it’s alot more powerful and effective putting your voice together with 180 other men.” 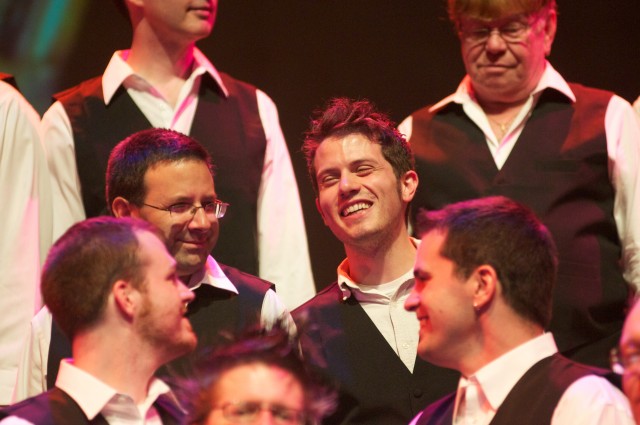 Hill adds that Out of My Range “started a year and a half ago at our Retreat when we divided up into groups defined on their decades: 20-somethings, 30-somethings, all the way to 60-plus somethings. It was a bit of a revelation to discover the actual decade of some of the individuals. They were either assumed to be older or younger. Then we asked them several questions: what do you particularly enjoy about being in your current decade? What challenges do you or those in your decade face? We gleaned alot of information, much of which was utilized in the text of our new commission.”

Worth noting: Out of My Range has been underwritten by Alan Braun and a significant portion has been matched by husbands Genth and Swenson.

Shaieb also composed Through A Glass Darkly and The Kushner Trilogy which were also TCGMC commissions.