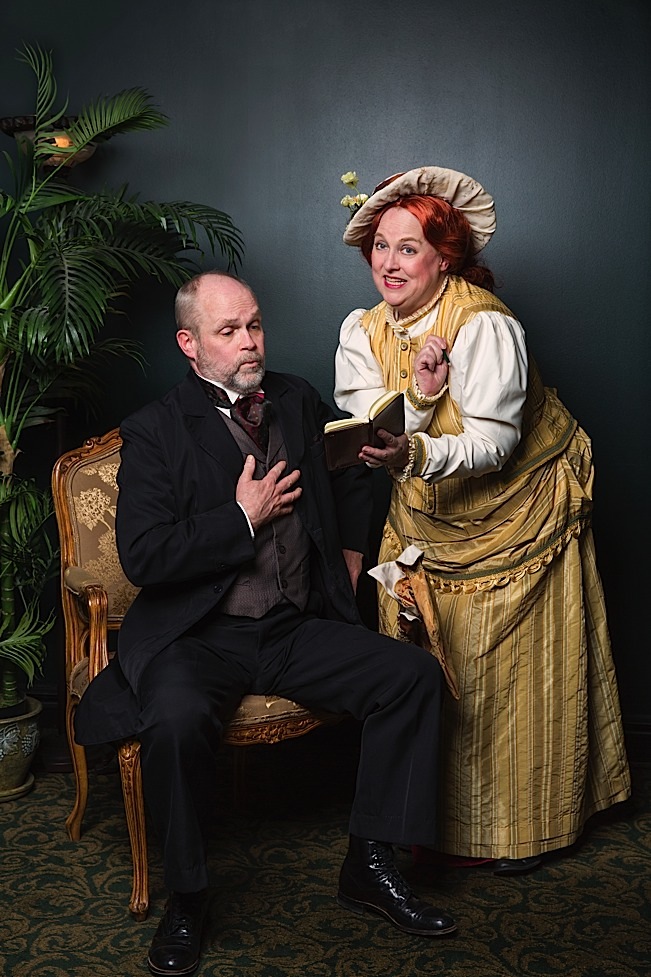 When major gay playwrights of the middle 20th century are brought up, one is likely to hear Tennessee Williams, Jean Genet, and William Inge. But there was also another. He played his cards close to the vest, or closet, if you will: Thornton Wilder. He won three Pulitzers, one for literature: The Bridge of San Luis Rey and two for drama: Our Town and The Skin of Our Teeth. Girl Friday Productions has produced both plays previously, and now another, though it didn’t win the Pulitzer. That said, The Matchmaker is a beloved comedy with an enduring uplifting spirit, which you may well know as Hello Dolly!, the musical adaptation by Jerry Herman.

However, The Matchmaker, was a popular straight play farce that wowed critics in the 1950s and as Craig Johnson’s staging for Girl Friday at Park Square shows us, it has relentless staying power. Karen Wiese-Thompson drives the action with winning vitality as protagonist, Dolly Levi, a widow who is what we today call a “networker”. She connects people via personal needs, from romantic love to dry goods. In our own time of wireless (dis)connectedness she seems vibrantly radical as someone who brings home the reality that we all need one another, up close and personal. Moreover, Wilder implies heavily that we are actually happier, healthier, and more prosperous when we recognize our connection with others.

Alan Sorenson brings a distinct vision to the lead men’s role of merchant and curmudgeon, Horace Vandergelder. For most actors who play this role, they get away with phoning it in as a constipated middle-aged stereotype. What amazes is how Sorenson reveals a Horace who is coming into the consciousness that his angry continuous attitudes of stinginess, superiority, and arrogance are killing his soul. When we hurt others we hurt ourselves.

Horace is a man who almost rabidly controls his employees and family members. He cannot see that he is a classic exploiter of those he thinks of as the lower orders. One sees how the powerful of the Gilded Age were able to use the puritan work ethic and dreaded fear of poverty to program common people into working themselves to death. It’s one of Sorenson’s best performances ever and ultimately he makes Horace a lovable character. His progression from darkness to light is splendid.

Kirby Bennett is a comedic revelation as Flora Van Huysen, a society lady related to Horace, who mistakes the identities of the play’s characters. This increases the hilarious chaos that infuses the play. It’s all fabulous, well coordinated fun. Nostalgic, yet radical in its cry for people to loosen up, let go, question authority, and follow their bliss.

Johnson’s entire madcap cast, Kathy Kohl’s costumes and Rick Polenek’s set capture the late 19th century atmosphere and an uplifting feeling of transcendence over what the world throws us to.