Touchdown In The Twin Cities

A trio of Minnesota transplants are bringing gay flag football to the Twin Cities.

When Christopher Lewellyn-Otten decided to move from Boston to the Twin Cities with his husband, there was one thing he couldn’t leave behind. 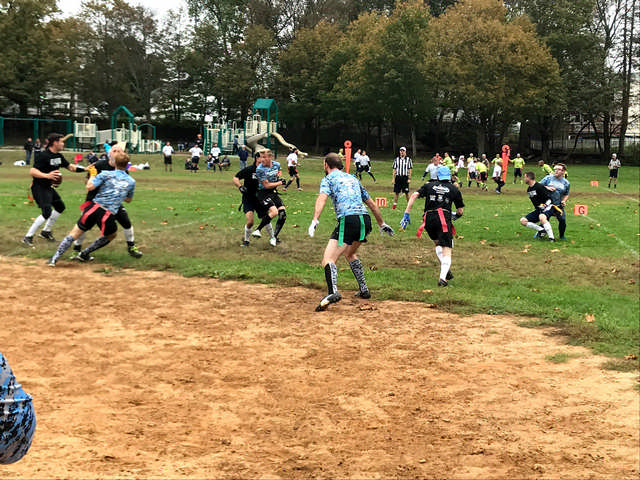 “I really wanted to bring that opportunity that I was able to enjoy here, to the Twin Cities community,” Lewellyn-Otten said. “Once my husband and I finalized, and knew that we were moving back to Minnesota, I was like, I really don’t want to lose this.” 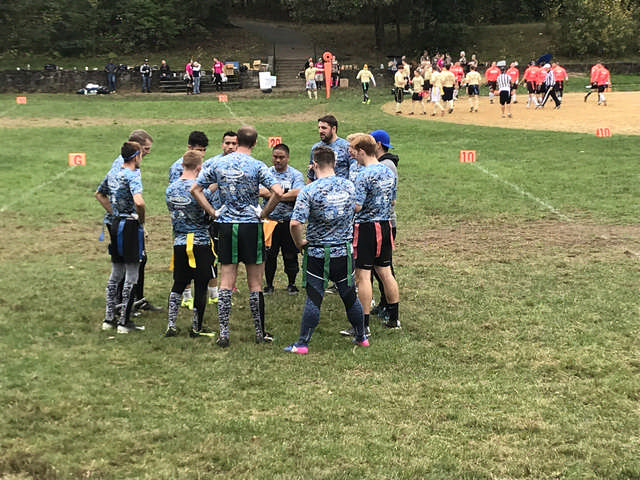 A team huddles before a game at Dorchester Park in Boston. Photo by Matt Lewellyn-Otten

During the past six months, Lewellyn-Otten has worked with the National Gay Flag Football League’s national board of directors to get a Minnesota league up and running. So far, the new league has a field, its own board, a website, and a 164-member Facebook group.

The National League has been around for about 17 years, Lewellyn-Otten said. According to the National League’s website, there are more than 200 teams and 24 leagues in the United States and Canada. The Twin Cities chapter will join major cities like Atlanta, Houston, Los Angeles, and Seattle.

The league—both the new Twin Cities chapter and the national branch—prides itself on its accessibility, inclusivity and community involvement. All genders of all ages and sexualities can play, and some athletes are in their 60s and 70s. Though competition is a factor, National League Commissioner Thurman Williams said the practices and games are about more than simply playing a sport. 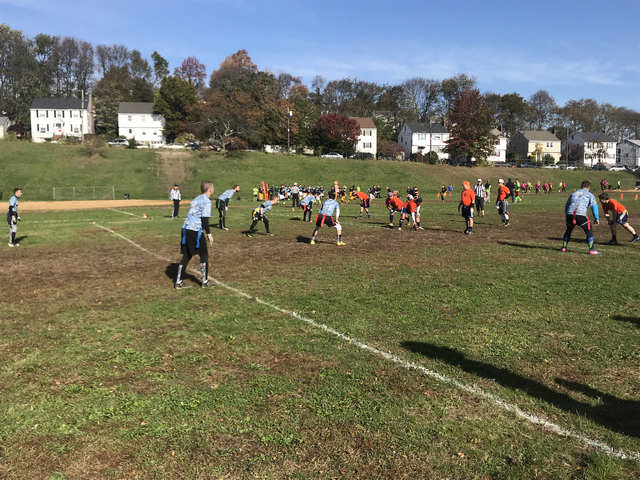 “We understand that each of our flag football communities provide the opportunity to those who wish to compete, both at a high level and sort of a novice level,” Williams said. “We also know that it’s a great place where people connect, where they meet friends of a lifetime, a life partner, a venue to connect with like-minded people and then, more importantly, it’s an environment where we have an opportunity to unite.”

For Lewellyn-Otten, the league is about challenging old ideas and creating relationships with the larger community. League members are encouraged to get involved with outside events, and straight allies are welcome to participate.

“I feel it’s very important to encourage the community and camaraderie amongst the people that are joining. We really need to provide an example for the next generation of LGBT youth,” he said. “It’s really to push acceptance, pride and self-confidence among the community, but then also to build bridges and break down stereotypes.”

Each individual league is a grassroots effort. Williams helped fund the Atlanta league, and said he likes to see other GFFL athletes take the same initiative.

“Having another city come aboard the NGFFL family just means there are more people for us to compete, connect and unite with,” Williams said, referencing the league’s slogan. “We’re excited that Christ has taken the spirit and the energy that he’s received from Boston and… wishes to create that same level of experience for other people.”

Every city-level league has multiple teams. Lewellyn-Otten hopes that, for the Twin Cities league’s first season, 128 people will participate. Teams will have 16 players each.

The gay flag football season is relatively short. It begins Aug. 4 and ends Sept. 29, with two games held each Saturday. The season culminates in the national Pride Bowl, held in a different city each year.

Lewellyn-Otten hopes to drum up interest during Pride weekend, with a booth at the festival, but his social media efforts have already piqued community interest. He’s also on the lookout for local organizations that could use the league’s help, as members of most leagues emphasize the importance of volunteer work along with sportsmanship.

“The main focus is actually giving back to the community… giving back more than we’re taking,” Lewellyn-Otten said. “It’s basically to help the community grow and thrive, it’s not just to have people come and play football. It’s much more than that.