“Life is so constructed, that the event does not, cannot, will not, match the expectation.” —Charlotte Brontë 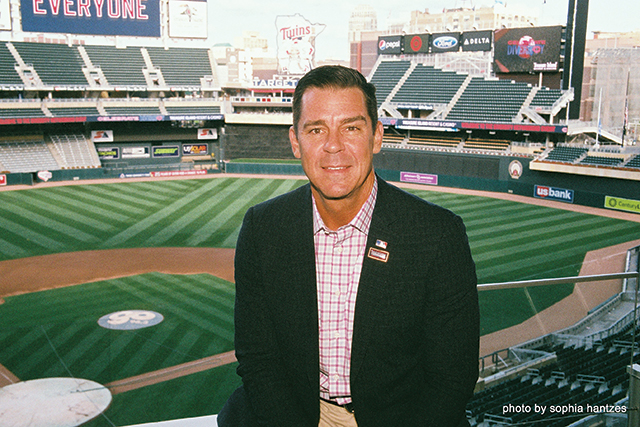 Billy Bean’s life seems to have been constructed around mismatching expectation. During his early adulthood, he was a Major League Baseball player. His family, his friends, and his colleagues all projected their expectations onto him, and, at first, he matched up with those expectations expertly, bouncing like an inside grounder from Detroit to Los Angeles to Japan to San Diego while plying his macho trade. In those days (the late ‘80s and early ‘90s) Major League Baseball’s culture revolved around winning games, and the only expectation was good, old-fashioned, meat-and-potatoes, American masculinity.

But Billy Bean confuted those expectations when he revealed the secret of his sexual identity and the secret pain that carrying that secret engendered. “I was really not comfortable with my reality,” he recalls of his playing days. “The thought of talking about it was not an option. I lost my partner the night before what was my last year, and that, along with the secret, and me worried about my health — I got some shaky medical advice that was basically, ‘You’ve been exposed, so you’re probably going to test positive,’ even though I didn’t test positive and never have. It was conveyed to me differently, so I had some worried days. To go to the park and try to harbor those three secrets as a marginal player in the big league was not fun.”

In an era when the merest thought isn’t real until it’s been cast into cyberspace via social media, it’s hard to appreciate the necessary gravity of such ninja-like slinkiness. “It was a different era,” Bean remembers. “I regret that I didn’t have the confidence even to talk to my family, or a friend, or my roommate, or whatever. I’ve come to see that that was a mistake, but at the time, it didn’t seem like an option.”

Discussing Bean’s sexual identity didn’t seem like an option because of everyone’s expectations. A gay man competing in Major League Baseball? The expectations summoned by those two concepts (in 1999, when Billy Bean came out, four years after retiring) mismatched like pinstripes and feather boas.

These days, Billy Bean serves as Major League Baseball’s Vice President of Social Responsibility and Inclusion.  Which begs the question: what in the sacred name of Ty Cobb does that mean? “Social responsibility encompasses a message of acceptance and inclusion which is our workplace code of conduct,” Bean notes in a tone that’s somehow both easy and guarded. “Major League Baseball had an existing zero tolerance policy of harassment or discrimination that was based on your race, your color, your religion, your gender, or your national origin. When I was brought on, they included sexual orientation in 2013. They were looking for someone to represent that message.”

Major League Baseball looking for GLBT people to be represented? Expectation is mismatched again. Or maybe not. Observes Bean, “I saw all these wonderful things going on in baseball, programs and initiatives, and people were not really sharing that, so a lot of fans didn’t know what was going on.”

If you expect a retired gay player now working in the front office to be dedicating his efforts to allowing a player to come out while active, then Billy Bean is mismatching your expectation too. “It can’t be graded, in my opinion, on how many players come out,” Bean says of his behind-the-scenes work. “That’s not the litmus test or report card I’m looking for, because that’s a whole other million considerations that are different from the job of each club. [My responsibility] is to make an equitable working environment, a place where the players understand the philosophy of the organization and where the fans feel safe to watch the game. If I can help create a culture that is different than the one I played in, then I feel like we are doing our job.”

This culture creation is not for the betterment of gay players, per se, but for the betterment of baseball itself. “The process is big, and my head is always full of ideas on how to take away the pressure that’s been associated with a gay male in a major league clubhouse,” Bean elaborates. “That gets to the core of the problem; it gets to where the media can go after questions like that. I don’t want it to be a distraction. I would be moved and thrilled if a player comes out and no one makes a big deal out of it. That would be heaven on Earth to me.”

But the notion of no one making a big deal of an active player coming out is a remote one, and an effect that most GLBT baseball fans pining for an openly gay player don’t consider is what happens next. “Baseball’s a hard game, and you need your manager to have confidence in you that you’re not a distraction and that your teammates respect you,” insists Bean. “If a player is receiving a lot of attention for doing something on the field, I think the other players are all for it. But if you are getting attention because you married a celebrity or your wife’s a rock star or you’re gay, I think after a few days they’d really like to move on and make it about baseball. That’s just about being part of the team.”

Bean brings that sense of teamwork to his message by not forcing it onto any given club. “I’ve only gone by invitation,” the Vice President asserts. “It’s not a mandate from the commissioner. That was essential to me.  Being an old school baseball kind of guy myself, I was nervous about how my message would be received. The right time and place is very, very important, so I made it known that I could come in any capacity.”

And one of the many ball clubs that approached Vice President Billy Bean was the one representing the Land of Nice, our own Minnesota Twins. In fact, August 23 was Diversity Day, when expectation was thrown to the four winds with celebrations of multiculturalism that included a pre-game, on-the-field parade, the singing of the national anthem by the Twin Cities Gay Men’s Chorus, a post-game networking event, and (oh, yeah) an actual game which only began after Bean himself threw out the ceremonial first pitch.

“I couldn’t feel prouder about today,” Bean affirms. “I feel like this is a wonderful example of a relationship that I have intact with the Twins, one that I worked very hard to cultivate. They are showing me that they’re reaching out to their community.”

As impressive as those outreach efforts are, they’re not the only such efforts proffered by the local major league franchise. “This is a week-long event,” Billy declared. “This effort represents a lot of resources, a lot of time and energy, and I’m very proud of the Twins.”

Since diversity is a means to the end of being nice, of course Minnesota’s major league team had to turn one day of diversity into seven days of celebration. What else would you expect?