I was sitting at the intersection of High and Gay in Columbus when I marveled at how I never knew about this gay-friendly gem of a town in Ohio. With a population greater than the Twin Cities, I didn’t know what to expect: comparable people, buildings, neighborhoods, and politics? Yes and no. While being the home of many corporate headquarters (such as Nationwide Insurance, VIctoria’s Secret, Abercrombie & Fitch) and one of the largest universities in the United States (The Ohio State University), the city itself seems shorter and broader than our Twin Cities. While its downtown seems less like Minneapolis and more like St. Paul, its historic neighborhoods seem more established and its arts district seems more concentrated than those of our own twin towns. Here is a list of some of the highlights of Columbus. 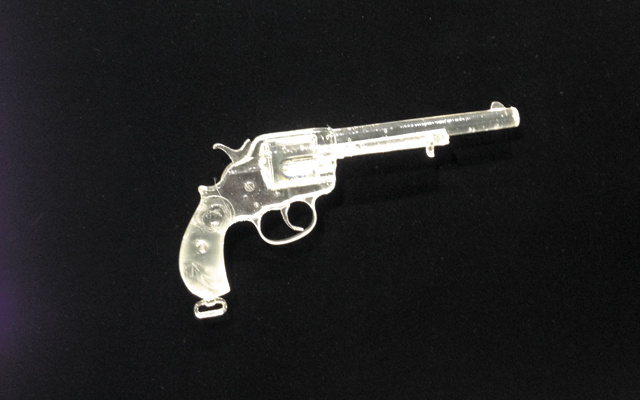 Named after an area of town designated by the police as being just short of the University campus in the northern edge of Columbus proper, the Short North is one of the grand destinations of Columbus. Not only is there a Gallery Hop on the first Saturday of every month when all the art spaces open to the public with music and food to enjoy and consume, but there are restaurants, shops, clubs, and the Pizzuti Collection to experience every day as well. The Pizzuti Collection is a non-profit 501c3 exhibition space dedicated to the presentation of contemporary art from the collection of Ron and Ann Pizzuti. Our visit was during the “Cuban Forever” exhibition, the most meaningful of the pieces were clear resin casts of guns and swords, bold mock propaganda posters, and surveillance-ducking smuggler pigeons named after film directors. An impressive collection of permanent art that also made plenty of room for traveling shows, the Pizzuti Collection is a must-see on the Short North list. 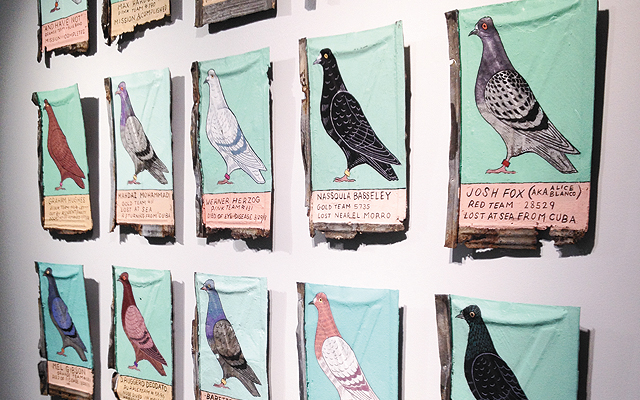 I recommend starting one of your weekend days with brunch at The Pearl, which is a restaurant, tavern, and oyster room. For small bites to ease you into your morning, have some Old Fashioned Deviled Eggs and Devils on Horseback, but save room for Chicken and Waffles with warm blueberry sauce and Ohio honey…it’s lip-smacking and finger-licking good, fortifying you for the day ahead. If you want to spend an afternoon drinking brew or tasting vodka, North High Brewing and Middle West Spirits will please your palate. You can sample the wares at North High Brewing and also buy supplies for your own home brew. Middle West Spirits shows off beautiful stills and bottles, and the tour ends with a tasting of the distillery’s “culinary” spirits offerings. The OYO Vodka is often referred to as the “whisky lover’s vodka,” which is apparent when you smell and taste what is carefully crafted from local Ohio fields. 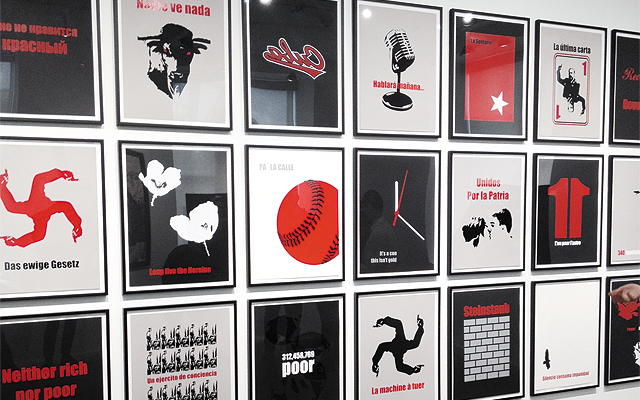 The Short North is home to a remarkable number of gay establishments. The arts are in the air; there’s a splash of rainbow—literal or not—everywhere. We spent some time in Torso, a store for men, where I admired a number of novelty shirts with text taken from Steel Magnolias and my travel companions bought some tank tops, because who doesn’t need a new tank top on a trip? Level Dining Lounge was not only a place to find tasty drinks and fantastic apps, but our apps of calamari and wings were a hit and my entrée of Pork Cacciatore was stick-to-your-bones hearty. It was all just what we needed before an evening on the town. Make sure you catch Nina West’s Excellent Adventure Drag Show at Axis while you’re in town. Nina’s a famous drag queen with a Choose Your Own Adventure Show that breaks the mold for drag shows; she’s got a talented ensemble and catchy show to (patent leather) boot. We ended each night at Union Cafe where there were plenty of seats on the patio, roaming drag queens, and strong drinks. Even though we weren’t at the intersection of two, there was plenty of Gay on this section of High Street. 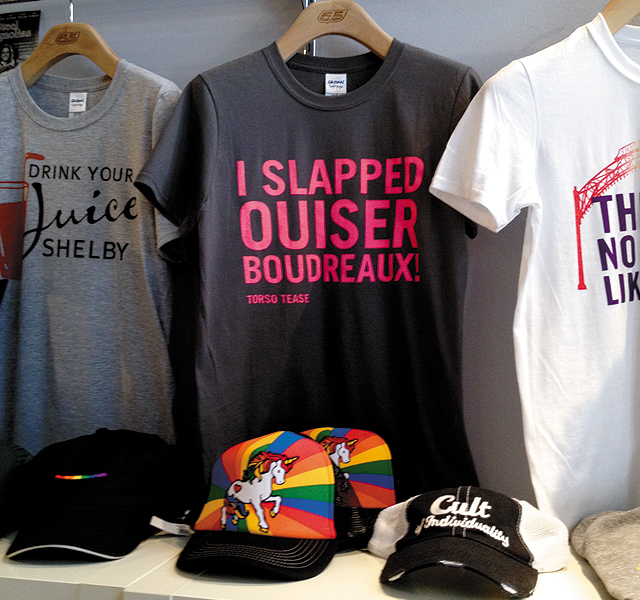 Steel Magnolias gets its spotlight at Torso. Photos by Andy Lien

German Village is a 233-acre neighborhood in Columbus that is on the National Register of Historic Places for its sturdy, red-brick homes with wrought iron fences along tree-lined, brick-paved streets. Settled in the mid-1800s, the Germans in this neighborhood made up as much as one-third of the population of Columbus. Today, you can take guided tours of the mostly residential area, enjoying the brick (but watching your step…particularly if you tend to be glued to your Instagram app on your phone) and the historic architecture around you. 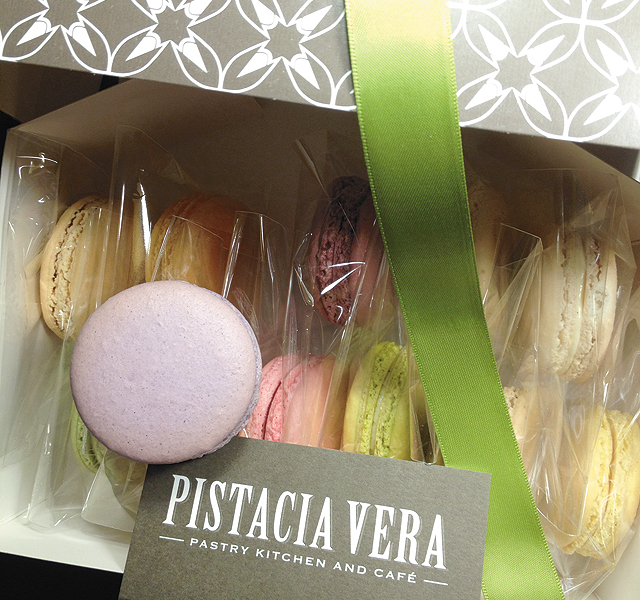 Hausfrau Haven, opened and owned by life and business partners for over 50 years, Fred Holdridge and Howard Burns (now both deceased), is a celebrated hub of neighborhood activity in the German Village with a market and a Laundromat for tourists and residents alike. Nearby, The Book Loft of German Village is one of the nation’s largest independent book stores. I recommend grabbing a coffee drink (the chocolate and peanut butter “Buckeye Latte” is a must) at the Cup o’ Joe next door and getting lost in the 32 rooms of bargain books (okay…grab a map if time is of the essence). When you emerge, you have multiple options for your dining needs, depending on the time of day. A food tour of the Village yielded us Kale Caesar Salad, pizzas of Mushroom, Fennel Sausage, and Spicy Yuma varieties at Harvest Pizzeria for lunch; yards of the most fresh and flavorful French macarons I’ve ever had at Pistacia Vera for an afternoon snack; small plates and swoon-worthy sangria at Barcelona for happy hour; ending it all with supper at The Kitchen. 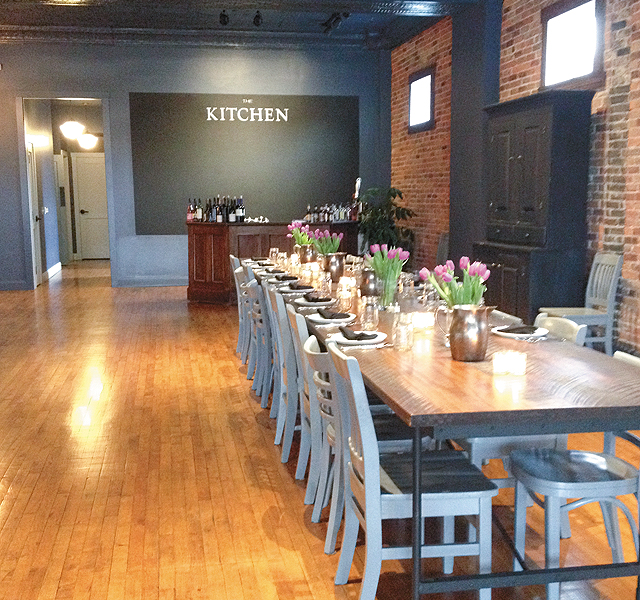 Community meal preparation and dining at The Kitchen. Photo by Andy Lien

For an interactive cooking and dining experience, go to the lesbian-owned locale called The Kitchen. Renovated from an old video store in German Village, this attractive space is open and airy, with multiple work stations for you to get your hands dirty while having plenty of fun. They’ll do the prep, cooking, and clean-up, you and yours get to do the assembly and await your masterpieces, served family-style in the spacious dining area. Our dinner included multiple courses with crab salad, salt-roasted fingerling potatoes, herb stuffed chicken (by yours truly), and peach and blueberry cobbler. With a full bar and mixologist on hand, I recommend keeping the imbibing light until after you handle the knives.

Nestled in Columbus’s Victorian Village, an old gas station has been turned into the most charming breakfast place with Sweet & Spicy Bacon and Pancake Balls to boot. For my best brunch pick, Katalina’s Corner Cafe loves our rainbow community and the rainbow community loves Katalina’s. Though I tried to swim upstream and get everyone to call the Pancake Balls on the menu “ebelskiver” per my heritage, I quickly gave in to the orbs of love and only used my mouth for eating. The varieties of filling for the Pancake Balls include Nutella, fig butter, apple/pumpkin butter, and other surprises for our senses. Other hit menu items included Boylan’s Biscuit & Veggie Sausage Gravy, savory soups, and deliciously hearty coffee. Then, to rub in how I lost the battle for “ebelskiver” but won the war, I was sent away with a sassy pink t-shirt that says “PEACE LOVE & PANCAKE BALLS.” Amen, Sister Katalina. Amen. 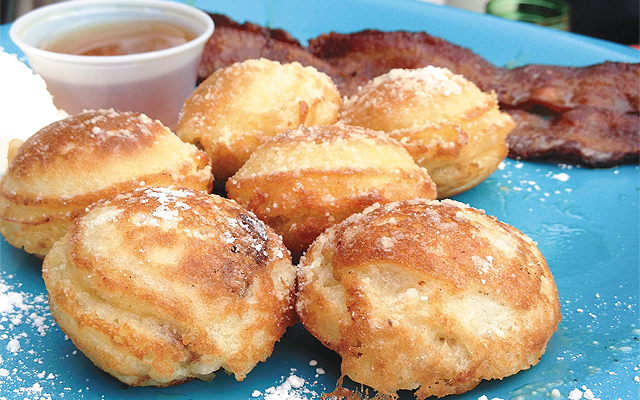 Find local small businesses and merchants in the North Market, a market with butchers, bakers, and candy makers; fishmongers, greengrocers, and restaurateurs. The businesses grow, catch, find, make, produce, distribute, cook, create, and invent their wares to sell at the only public market in Ohio. I meandered through and bought coffee at the Taste of Belgium, bacon and cheese-flavored popcorn at Pam’s Market Popcorn, Buckeye ice cream and a few macarons at the market’s satellite locations of Jeni’s Splendid Ice Cream and Pistacia Vera. Being that I was traveling, I didn’t take advantage of the meats and farm vegetables, but would have gladly brought home a bounty of food for a fresh and local meal. As it was, the gourmet snacks had to do. And they did.

A house, a chef, and a killer menu can be found at the Short North’s Basi Italia. I never thought I’d see the day when I’d name my favorite dish of a meal to be a salad, let alone one comprised of zucchini, but Basi’s julienned Zucchini Pronto tossed in a vinaigrette with almonds and pecorino cheese was simply superb. We sipped fresh watermelon cocktails and some of the specially-smuggled Middle West Spirits OYO made it around our table. While the inside dining area is in a charming house, we enjoyed dining al fresco on the patio. Second only to the zucchini primo, the Beef Short Rib with sweet corn mash, baby watercress, and espresso BBQ sauce was divine. 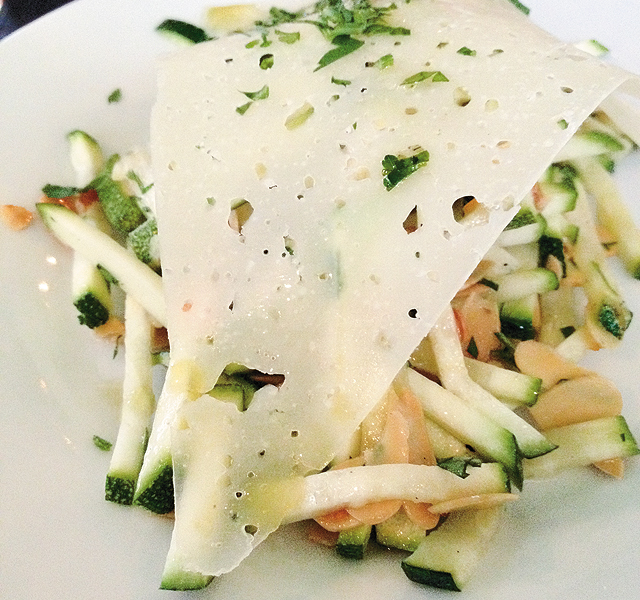 The most superb Zucchini Pronto at Basi Italia. Photo by Andy Lien

Columbus is an easy-to-figure destination. Our hotel, the Crowne Plaza Columbus, was centrally located and made for easy walking for some of the shopping and dining. As far as transportation goes, we took taxis, but now there’s an even better option for downtown Columbus, which utilizes public transportation. CBUS, which is a free bus that circulates downtown Columbus to connect the wonderful neighborhoods from north to south: Victorian Village, Italian Village, Short North, Capitol Square, German Village, Brewery District, Arena District, and back to Victorian Village. Beyond those options—and unlike our own program that just expanded from just Minneapolis to now include St. Paul and has yet to fully catch on—the Car2Go car sharing system is flourishing in Columbus. There’s a bike sharing program called CoGo, which is similar to the Twin Cities’ Nice Ride, for those who want to see it all on two wheels.

When we travel, do we want to compare where we go to where we come from? It’s unavoidable, to an extent, and I’d like to put out there that Columbus seems quite close to what we have in our own backyard, but with more and different for us to enjoy. Comfort zones are almost assured as Columbus is just really quite gay, day or night, from German Village to Short North to Victorian Village to the University. As far as additional attractions go, The Columbus Zoo is award-winning, the Franklin Park Conservatory is stunning, and the Columbus Museum of Art is a worthy stop as well.

Columbus. It’s not as exotic as it is familiar. Throw in how gay-friendly it is and you’ve got a home away from home. Great place to visit; would definitely want to stay there.