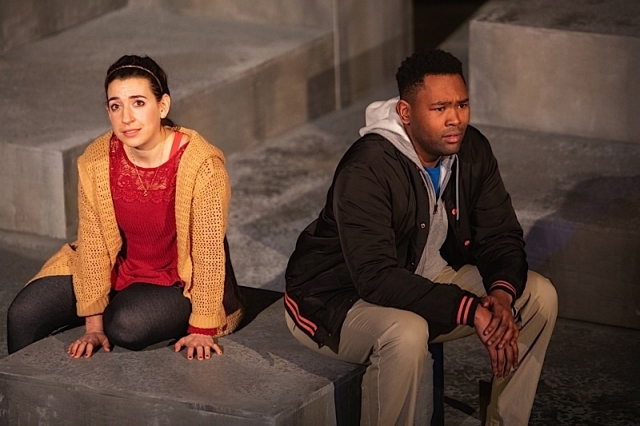 Playwright Anna Ziegler has boldly and brilliantly entered the arena where university panels coerce young students, still in their formative years, to make incriminating statements, often based on erotophobic and misandrist biases of academic interrogators rather than actuality, against fellow students. It will likely take its place as one of the emblematic plays of our time in the way that classics like Death of a Salesman and The Heidi Chronicles were of theirs.

Minnesota Jewish Theatre Company certainly picked the right man to direct with Harry Waters Jr., who created the role of Belize in the first production of Angels In America and was the star of Penumbra Theatre’s first full-fledged gay play, Stage Directions. Indeed, he was an inspired choice to direct what may be the thorniest play of our time. He’s an actor who has gone where others couldn’t or wouldn’t. And as a director he demonstrates the same quality.

Actually portrays the awkward interactions between two undergraduates who have yet to learn how to read the reality of the unspoken. Therefore, they fall prey to the reductivist legalism of an academic panel whose task it is, not to get at the actual truth of a situation involving the two, but to persecute them even if the charges are distorted or even downright false. Though some will see the panel as favoring Amber, the female student, it actually does its own traumatizing psychic assault on her just as much as it does Tom, the male student. We’re impelled to consider that the trauma inflicted by the panel is far more traumatizing on both than the incident itself and its investigative meddling done in the name of social justice.

Two characters convey the perverse elements of a Kangaroo Court set up against a student where he seems to be guilty until proved innocence. However, innocence is something that this court implicitly and ultimately disallows. They have a script that is to be adhered to by any means necessary. Both students are more than just shamed by that set up, they are seriously damaged  emotionally and quite possibly, professionally. The fact that they’re young college kids of limited experience in the world at large is irrelevant to bureaucratic dictates. As in the Stasi of communist East Germany during the Cold War other students are used to snitch and inform on others.

It’s not typical to speak of design elements near the beginning section of a review, but in this case it serves the spirit of the play so uncannily and hauntingly. Michael Hoover’s set opaquely emanates a touch of the ominous and the neoclassical. Representations of tall, grey, hard appearing pillars coldly overlook the human anguish and cruelty portrayed below. One may be reminded of the drab harshness of Soviet architecture or certain American government architectural examples built after World War II: a kind of postmodernist mutation of Actually’s actual Ivy League setting where the architecture often predates these eras and styles. It’s some of the accomplished Hoover’s best work. 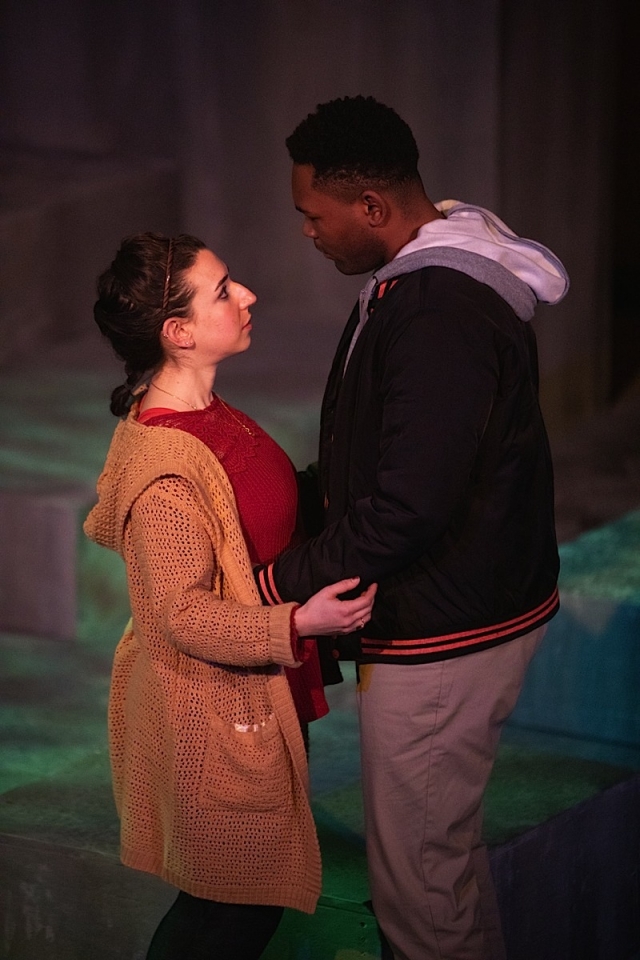 Amber (Miriam Schwartz) is white, Jewish and insecure. Tom (JuCoby Johnson) is black and confident. Both performances by these gifted young actors are visceral and absolutely devastating. They probe recesses of the human heart and psyche so deeply that it sometimes feels like we’re going into a sacred private inner realm that no one but the character her—or himself should ever go. At points things said feel like a supplication to God.

Ziegler ingeniously offers the race component in a way that transcends identity politics orthodoxy. Tom can surely be described as an outsider in the Princeton University setting. Like everyone of any race or gender, he is flawed. But Tom has predominantly solid vales and is fundamentally a youth of solid character. Therefore, it’s the content of that character which Johnson exquisitely reveals. He makes Tom a contemporary Everyman.

Adding a tidal wave to the situation is that Tom has gay male friend of color who inflicts something extremely vindictive and inexcusable toward him (and I don’t mean making a mere pass. It’s something truly reprehensible). So as not to reveal what happens, it boils down to what frankly is an issue of covetousness that many of us who are gay or bisexual often fail to self-examine. One might think a gay man would be the very first to speak out against privacy invasion in the name of coerced sexual allegations. Unfortunately and despicably, that’s not the case. This gay male feeds into it.

Ziegler has shrewdly written an indictment of the authoritarianism that has come to grip academic policies on sexual misconduct. By extension, it also pertains to other institutions of business, religion, and government that are following similar strangulating approaches. This groundbreaking playwright also signals that there is indeed a cry of outrage among women about misandry polluting such policies. 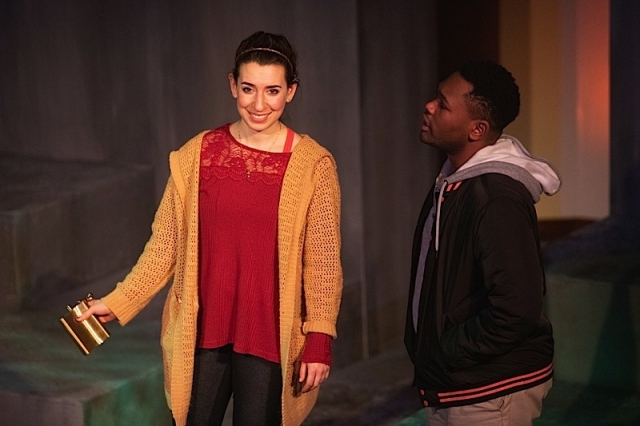 Aside from fleshing out these combustible concerns so intricately, Ziegler is remarkable in the structure of her two-character play. Actually is heavily comprised of monologues with interactions between the actors. This format is unextraordinary in itself, but the upshot of so many pieces that go this route, as satisfying as they may be, is that the monologues can seem not fully unified with a central theme or psychological arc. They may lead to a very effective conclusion, but they don’t culminate toward something sharper. Actually, however does exactly that. Like a good thriller, you may find yourself on the edge of your seat.

Moreover, the playwright astounds with the facility through which her two characters convey multiplex views and actions of the persons weaving or caught in the web of a corrupt investigation. This is where Ziegler’s mastery and Waters’s penetrating direction lead us to a see a jolting play that rates with the greats.

Note: Celebrated lesbian writer, Camille Paglia, who once made the cover of The Advocate, has written quite thoughtfully on this subject in her recent book, Free Women, Free Men.