Galena — Take It For Granted 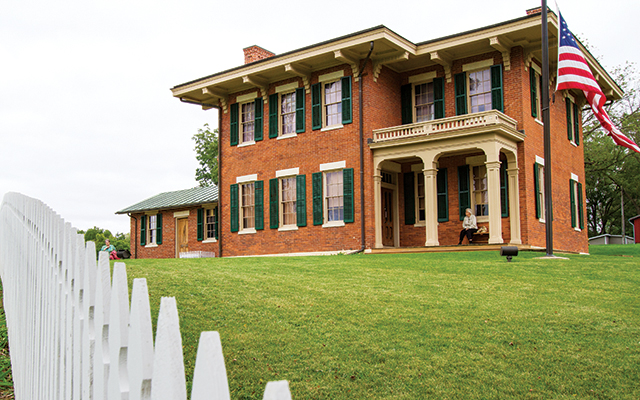 For history buffs, it’s party time: the 150th anniversary of the end of the Civil War. The spidery handwriting weaving across the fading document General Grant penned for General Lee’s surrender at Appomattox in April 1865 made it official, and it’s right here: preserved in the Old Market House in Galena, Illinois. Oh, there’s Grant’s top hat, too, and the cigar box that fueled his 20-a-day habit when he made his home in Galena (pop. 3,500 today but 14,000 back in its prime, when its citizens gave him a mansion there in gratitude for victory).

I’m hot on his trail in this corner of the map where Illinois, Wisconsin, and Iowa convene, about five hours from the Twin Cities. I head for the general’s brick mansion marshaling the bluff of this sweet river town, where Georgie, our tour guide, tells us he trained troops on the front lawn. There’s his statute, in Grant Park, supervising a vista that includes his more modest original dwelling on High Street; his dad’s leather shop, where the young man was put to work; the Methodist church of 1829 he attended; the dowager DeSoto Hotel, where he plotted election campaign strategies (as did Lincoln); the Abbey House B&B, in whose gazebo he smoked those infamous cigars with his neighbor; and the Galena and U.S. Grant Museum, home of the grand, mural-size “Peace and Union” painting by Thomas Nash where he’s portrayed with Lee, along with his own generals (nine of whom came from right here in Galena).

The museum also distills the story of the original Native Fox and Sauk tribes who chose this site to live, defended by its surrounding hills, which harbored a goldmine of — not gold, but lead. Galena’s lead mines (peer down the scary shaft of one right inside the museum) produced the bullets that fueled the war. Then, aside a panorama map, grab the riverboat’s wheel and “navigate” it into port in the boomtown when, 150 years ago, Galena was bigger than Chicago.

The boom funded one ultra-gorgeous mansion after another, making the town today “an outdoor museum,” decrees Steve, our guide on a history-meets-mystery ghost tour along Main Street, past sleeping Turner Hall (Ooh! Blinking lights!) back to the corridors of the Hotel DeSoto, where you may — just may — encounter the ephemeral Lady in Black. Today all Main Street’s brick shops, and the gracious Georgian houses on Bench Street just above it, are preserved on the National Register of Historic Places. After scaling the town’s climbing walls that masquerade as streets, you’re in shape for the famous Galena Triathlon: eating, drinking, and shopping. 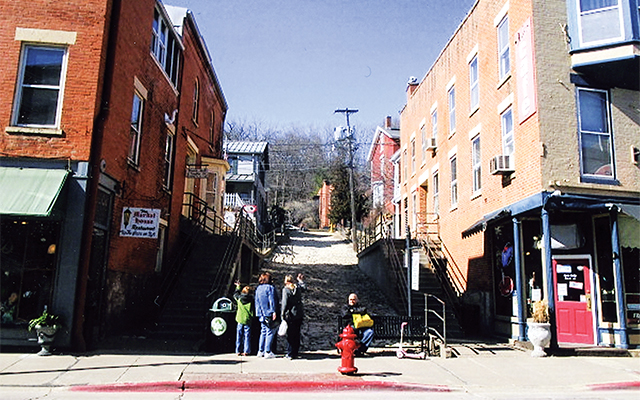 Eat
Twenty-seven restaurants in town, they tell me, and nary a chain (and that doesn’t count the 35 B&Bs that conduct their own breakfast marathons). Patrolling Main Street, you’ll discover most of them, starting with Chef Ivo’s, King of ’Cue, who slathers his pulled pork and ribs with homemade sauces. (Connoisseurs know to start the meal with the fried dill pickles. Just sayin’.) Embe goes all-natural, from soups like cream of mushroom with artichokes and sundried tomatoes, all the way to hot bread pudding. Live music on weekends, too.

What to order at Fried Green Tomatoes? Well, duh. Here they’re topped with mozz and marinara to salute the kitchen’s Italian slant, which favors pork osso buco, chicken piccata and pesto salmon. At neighboring Vinny Vanucci’s, there’s more of an Eye-talian flavor, thanks to Nonna’s recipes straight from the toe of the boot. Here a doggie bag is not merely an option, it’s a requirement. Same might be said of the Golden Hen’s breakfast omelets and Benedicts, which come with a amuse-bouche of rice pudding.

“Come to Galena’s table,” they welcome you at One Eleven Main, whose craftsmen chefs revere local viands and produce. The beer-braised pot roast was mighty good, the salmon with candied pecans and brandied sweet potatoes even better. Choose your food loyalty, if you can, at Fritz and Frites. Francophiles gobble the mussels, the choucroute garnie, the cassoulet, while fans of German cooking are forced to choose between a litany of sauerbraten and schnitzels.

Galena’s oldest restaurant — and, many would argue, best — is the Log Cabin Steakhouse, serving aged and hand-cut beef since 1935. The Rigopoulos family will sear those hand-hewn steaks Greek-style, then side them with verging-on-illegal hash browns: one bite and you’re addicted. My lamb chops came with the boast “The Rigapoulous family’s claim to fame.” No lie; just a cheer of “Opa!” as the saganaki starter takes fire. 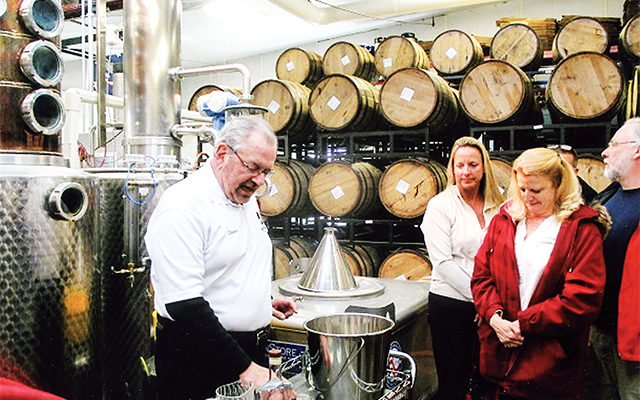 Drink
There is great drink to be found in the many restaurants in town. Also recommended are the Galena Brewing Company’s primo beers and Galena Cellars’ tasting room, or a tour of the winery itself. Or the magnificent Rocky Waters Vineyard, a short, pretty drive into the hills. Or Blaum Bros. Distilling Co., founded in 2014 by two brothers dedicated to using local grains (wheat, corn, rye, barley) to power their distillery, where Dennis, our genial tutor, conducted an easygoing tour of the plant, then offered sips of their moonshine; a clean, clear vodka; and an herb-forward gin.

Shop
Do a little weight-lifting at home to get in shape, then hoist your bags at comfort stops like Book World (lush selection of Grant, Lincoln, and Civil War history); Galena Garlic Co. (rubs, powders, pickles); a cadre of antiques shops that would keep The Pickers in business far into the next century; a lovely pottery shop attached to Abe’s Spring Street B&B — a former brewery now housing guests in rooms where proprietor/ ceramic artist Charles Fach has installed his figured tiles around the potbellied stove and kitchen counter as well as elegant iron bedposts topped with nymphs of his making. He offers pottery workshop stays where guests make and glaze their own dinnerware, then sup from it at a candlelit feast. More local talent is on display at the Galena Center for the Arts atop the hill.

Don’t miss the Sweetheart Bakery, or Root Beer Revelry store (mix and match your own six-pack from old-time brands like Dad’s, Mom’s, Cap’n Eli’s, and River City). Upcycle Gypsy, is my personal fave among the town’s boutiques, is the domain of Kelly, a lass who creates its vintage-look jewelry and answers the phone with the optimistic message: “Best shop in Galena!” Oh, and don’t miss the legendary socks shop across the street (by now you’ll need a bigger size, anyway).

The city’s stairs provide a free workout, or rent segways, bikes, kayaks, skis, whatever. Sign on for fishing, golf, and hot-air balloon excursions. For a list of the town’s many festivals and events (everything from Wine Lovers’ Weekend to the biggest, baddest Halloween Parade in the Midwest) check out www.VisitGalena.org.

True factoid. A Jeopardy question asks, “What town has the biggest percent of GLBT residents?” You probably guessed the answer. No designated gay bars here because there’s absolutely no need; everything’s been integrated for, like, forever. The city museum is working on a permanent exhibit of the town’s gay community and its contributions. Newcomers and newlyweds Robert and Douglas, from Chicago, recently purchased the Aldrich Guest House — a gracious B&B erected in 1845 by the town’s postmaster, then Congressman, from which the present owners tossed out mile-high stacks of doilies (“terrifying”) in favor of a clean, contempo vibe. Enjoy wine happy hours in the gorgeous garden, too.