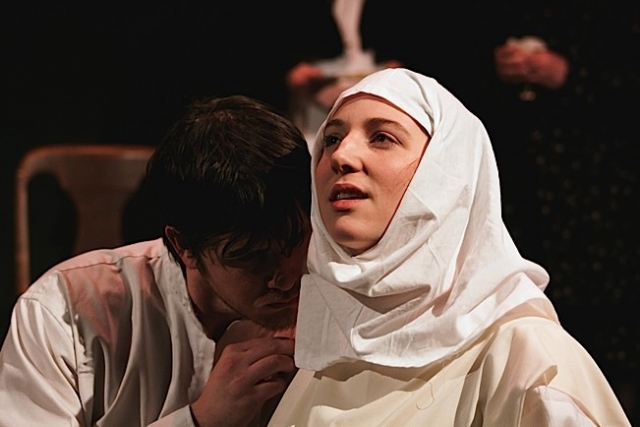 Renegade convents and monasteries have been historically disruptive to the smooth sailing of the Holy Roman Catholic Church. In the 17th century, during times of plague, the order of Theatine nuns and fathers extolled a gospel of peace in the Italian village of Pescia. A Vatican-authorized investigation of heresy there forms the narrative of Vile Affections by Vanda, now in a bare bones and passionate production by Gadfly Theater at the People’s Center.

The play begins with a nun crawling onto the stage space while other nuns walk and take their place at a table to partake in a meal. They throw bits of bread to the nun on the floor and she gathers them up like a domesticated animal who has been deprived of food. The groveler is the mystic, Benedetta Carlini, once the convent’s Mother Abbess, who has long been in solitary confinement broken up by demeaning food and prayer breaks so that she may atone for her heresy and hopefully gain forgiveness from a fear-inducing God.

The action soon flashes back when an investigator from Rome, Provost Cecchi, arrives having heard of wild accounts of Benedetta receiving the stigmata. Stigmata is when someone, most likely a priest or nun, in some mysterious way, exhibits the physical wounds of Christ on Calvary’s cross ripping to the skin’s surface. It is a bloody sight and this production doesn’t shy away from that.

If her stigmata is deemed genuine then a nun could be deemed a visionary and could get on the short list for sainthood. If not, which was often the case in such investigations, she could be condemned as a fraud or heretic. Punishments were insanely cruel, ranging from extreme isolation to being burned at the stake.

The thorn in Benedetta’s side is the tenaciously doubtful Sister Fiora played with crackling strength by Dana Lee Thompson. Whether her doubts spring from rational observation, the need to play devil’s advocate in a mileu that has succumbed to cult of personality, or just plain jealousy, is hard to detect. And that’s what makes Thompson’s portrayal so intriguing. 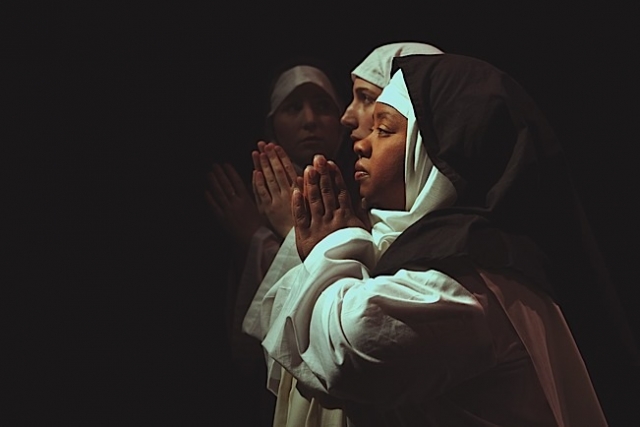 Audience members will find themselves taken aback -aroused or disgusted- by Benedetta’s outright ecstatic behavior. Amanda Kay Thomm Bahr plays the role with abandon as Benedetta seems to be receiving an invisible ghost of Jesus right onto her body and thence on into rapturous lovemaking with his spirit form. It’s a brave and raw performance superbly balanced with a down to earth quality that disarms. This also casts a powerful mood.

However, things actually unravel when fleshly sexual allegations are made. One is heterosexual and is rationalized away. But when it is revealed that Benedetta is has been making love to a young and lovely sister, Bartolomea (an endearing Emily Weiss), the judgment against her is thunderous.

It would be easy and valid to play all this with sternness but Vanda and director Cassandra Snow want us to see the humanity. Rob Kruegger as the Provost does not fall into an inquisitor stereotype but shows him as a man who is struggling with an emergence of a more tolerant, modern sensibility. It’s a terrific performance that mirrors any intelligent person whose instinct is leading him or her toward something that is more advanced than the time and place they are stuck in. 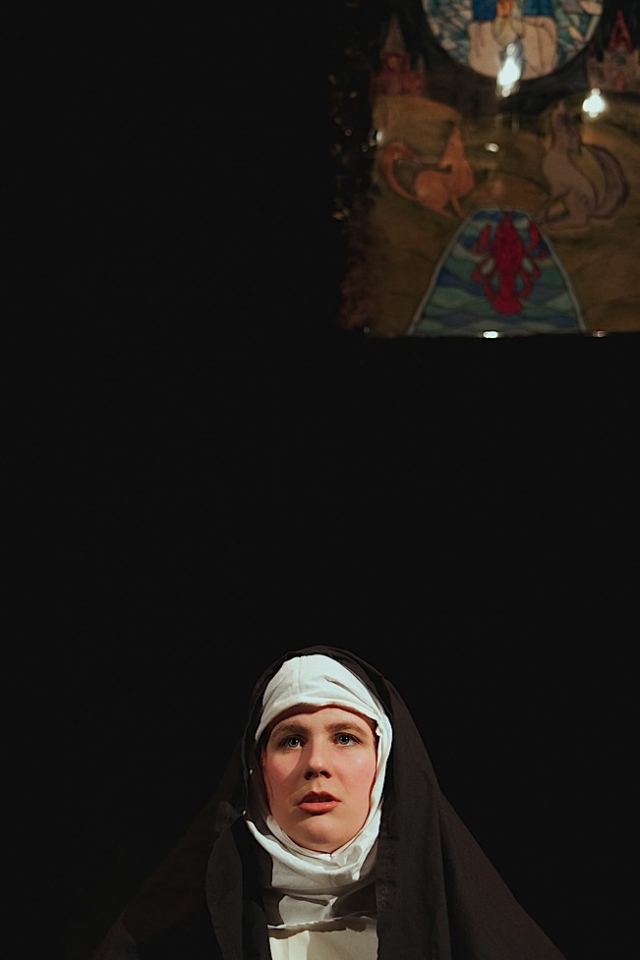 Jim Larson brings weighted humility to the role of Father Ricordati. His scene where he is accused of a sexual advance toward Benedetta, is poignant. Andrew Rosdail, Sarah Parker, and Missy Hildebrandt lend rich support to what is a luminous period production. Like all the actors in the play, they seem to have actually stepped out of the actual time and place.

This luminosity is also beautifully served by chanting music led by Weiss. Immanuel Elliott’s layered black and white costumes have this ephemeral sense of how the characters feel a great shame over and fear of their own bodies and the bodies of others. Simple, yet profound. Vile Affections is a visceral production that submerges you in ascetic austerity and ecstatic brilliance.