This Fall Arts & Dining Issue is full of color and life. As a season preview, we get to see what we can look forward to in the upcoming season of theatre, music, and dance performances in the Twin Cities. The arts have long been an integral part of the GLBT community, and Lavender makes sure to pay homage to this relationship in every issue. The arts not only are home to many people in the GLBT community, but also reflect back to us our lives, cultures, politics, dreams, and experiences in myriad ways.

For so long, we have seen heterosexual roles played by homosexual people. In somewhat rare appearances, GLBT characters (and even more rarely, same-sex couples) have been presented in productions, most of which we already know and have raised to cult status in our own GLBT Canon. But what will happen in the arts as our society changes to be more inclusive of the GLBT community?

Just in the past couple of years in Minnesota, we’ve gone from a proposed amendment to ban same-sex marriage to full marriage equality. Nationally, Section 3 of DOMA was struck, immigration laws are changing, and legally married same-sex couples can receive federal tax benefits no matter where they live in the United States. Widespread change is happening. Quickly. How will it be reflected in our arts and culture?

The arts will continue to include the GLBT community. The presentation of GLBT people and relationships that are already evident on our televisions and stages will not decrease or go back into the closet, but will continue to be there as evidence of the community.

The arts will expand to be more inclusive of the GLBT community. With the legalization and validation of same-sex relationships, a world of story lines cracks open. If I were a writer of fiction or plays, I would think what an exciting and enriching era is upon us. As the community has been in the closet, so has the art that reflects the community to a large extent. Invisible relationships are now becoming visible. People are truly going to be living out. And, scripts will be written of these relationships in greater numbers and better quality. GLBT art will go from cult status to, arguably, part of a new Western Canon. It’s exciting to think about and it’s fascinating to wonder how this will happen. I imagine that these changes will happen just as the shift toward acceptance of same-sex relationships has happened: through conversations and education.

I read an article called “My Children and the Limits of White Privilege” (www.nursingclio.org/2013/08/28/my-children-and-the-limits-of-white-privilege) that talks about race and color-blindness in our culture, that perhaps speaking bluntly about race in everyday interactions is the better way to handle our differences and figure out our similarities. In it, the author, Danielle J. Swiontek, makes the point that for many white people, people of color are mysterious. By trying to norm everything and ignore the differences, people of color actually remain mysterious. I can see a parallel conversation about sexuality and sexual identity. People who are unfamiliar with same-sex relationships, with trans people, with more open ways of thinking as far as sexuality is concerned, find the people and relationships of the GLBT community to be mysterious. What happened during the VOTE NO campaign and the campaign for marriage equality were conversations that demystified the GLBT community in person-by-person or couple-by-couple increments…moving toward demystifying a whole community of people that has been marginalized (and/or in a closet and out of view) for so long.

Whereas an example given about demystifying people of color could include being able to ask if people with darker skin still require sunblock, a similar example for same-sex couples could include being able to ask who is the man or woman in the relationship. In the first example, skin is skin and skin requires sunblock; yes, people of color require protection from the sun and use of sunblock is determined by each person. In the second example, a same-sex relationship doesn’t have a man and a woman, so there isn’t a man and a woman in the relationship; roles are determined according to how each couple wants to operate. The questions aren’t stupid, because not knowing something is a legitimate reason to ask; the answers aren’t obvious, or else they wouldn’t need to be given. Where we need to make sure communication happens to foster understanding is to allow the questions to be asked and answered with respect.

I know it gets tedious, especially when the questions are asked and answered time and again…and can seem a little naïve. Thankfully, this responsibility can continue to be shared with the arts. It’s easier to show a kiss between girlfriends than it is to explain “how it happens.” Once a loving same-sex family is shown, it’s easier for people to recall the image and be more familiar with such a situation that is sure to become part of everyday life. We can all probably remember conversations we’ve had with people that at some point or other involves, “Yes…kind of like in Modern Family.” Whether entirely accurate representations of our own situations or not, the arts help in demystifying all sorts of groups of people. I can’t wait to see how the arts will grow even more in how they enrich our lives and the lives of the people around us.

A great example of art changing to reflect society in this fall arts season is the upcoming production by Illusion Theater that celebrates marriage equality in Minnesota: LOVE & MARRIAGE: What a Difference a Year Makes. Last fall, the Illusion Theater developed a new musical revue to explore marriage and what it signifies.  After same-sex marriage was legalized and the Supreme Court struck down Section 3 of DOMA, Illusion was asked, “Will you bring the show back to celebrate this historic moment for love and marriage in Minnesota?”  Illusion answered that question by developing new art with both new and old material for this whole new era. Illusion Theater Co-Producing Director Michael Robins said, “Last year we experimented with the form of a musical revue, and this year we’re having a joyful time sifting through music, bringing back some favorites, choosing some well-known tunes and finding some new gems.” Composer/Arranger Roberta Carlson added, “I think of last year’s show as a Valentine, both wistful and hopeful. This year is more of a celebration of marriage and the roads to it – and through it.”

This is when we change our narrative to be even more inclusive of sexuality and sexual identity. We get to be celebratory in our art, rather than fearful or worried. Like with the last issue when I talked about infusing history and the tourism industry with women, gender, and sexuality, we can look and expect our art to present–and be blunt about–our lives. Demystifying this community will be crucial to greater empathy and understanding in our culture. As with all art, it will be beautiful. Challenging. Raw. Painful. Victorious. Confusing. Fantastic. Realistic.

And we’ll be here to tell you about it.

See you in the seats,
Andy 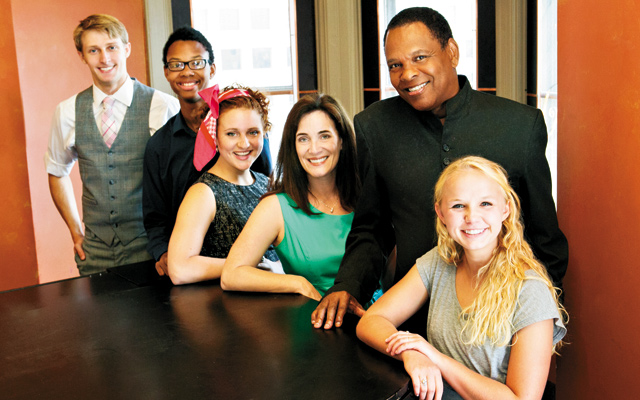 Love and Marriage: What a Difference a Year Makes. Photo by Lauren B. Photography