From Frankfurt to UNESCO: Germany’s Wonders 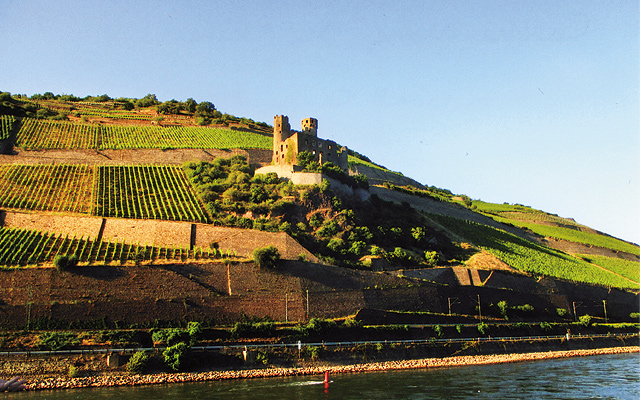 Castle along the Rhine. Photo by Carla Waldemar

“I am a Berliner,” President Kennedy once famously proclaimed—likening himself, unwittingly, to the doughnut that goes by that name in a fractured attempt to declare his affinity for the city. Likewise, I am a Frankfurter—charmed by the town that calls its local sausage so. Oh, I love the wurst, all right, along with the fist-sized pretzels, tart-sweet apple wine, and herb-bright green sauce that improves the flavor of boiled eggs and potatoes in Frankfurt’s kitchens. But I love even more the city’s living history, its footprint, and its mindset.

Some call it “Main-hattan” in homage (or despair), acknowledging the cloud-scraping silhouettes of its financial sector bordering the River Main that slices the town. But since 794 A.D., when the town first saw its name in print, it’s the Alt Stadt—the Old City—that’s charmed most visitors. (On a train from the airport, you’re there in 15 minutes.) On its historic platz, lined with half-timbered houses, newly married couples (including Adam and Steve) bound from City Hall as mimes strike poses and itinerant fiddlers strike up a tune. Its graceful St. Nicolas church of 1240 acts as a prelude to the grand Cathedral a few blocks away, its lacy Gothic spire giving way to über-Baroque exuberance. Three precious medieval altars are on display, saved from the virulent bombing that besieged the city in 1944. Holy Roman Emperors were crowned here. 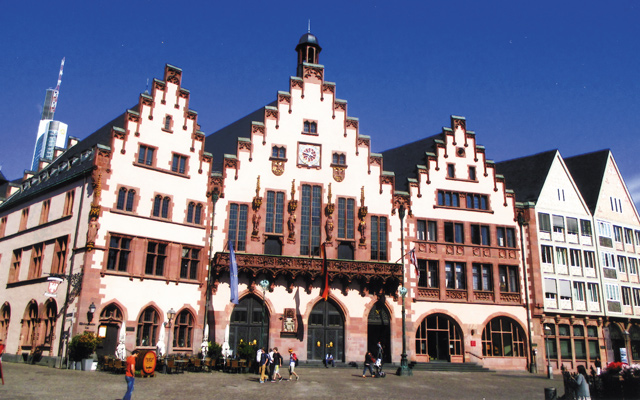 Connecting the two holy sites is Saargasse, a street-scape of the future, lined with cheeky facades from an architects’ competition (to paraphrase MPR, reminding folks that all buildings were once new). Close by, the History Museum displays the Emperors’ jewel-crusted crown as well as landscapes of the city before and, tragically, after the bombs dropped.

The poet Goethe’s house is, indeed, new, but it’s an exquisite reproduction (après bombing) of his birthplace, open to tour. Near it rises Markethalle, a hundred stalls of all that’s fresh and tasty. Pick up cheese and sausage and skip upstairs to its open-air wine bar for a dose of people-watching. Or see them ambling along Zeil, the vast, pedestrian-only shopping promenade.

I saved my browsing for a jaunt across the river to Sachenhausen, a boho enclave of indie designers, flower stalls, sweet cafés, and taverns where—forget the beer—apple wine is the premier tipple, poured from an iconic gray jug. Among those open-air tables wanders the “pretzel boy”—in this case, a graying gent—offering the local specialty, big as a fist, from his basket. 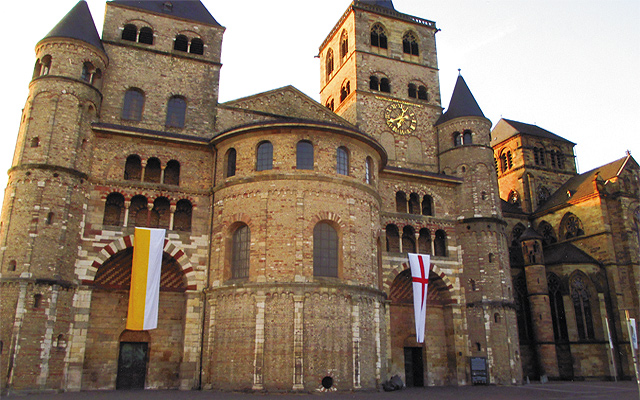 The riverbank, where locals push bikes and baby buggies, is Frankfurt’s claim to fame: the Museum Embankment, where most of its cultural storehouses—35 in all, one to suit every passion—shoulder each other. The world-famed Stadel showcases every Old Master you might name, from Vermeer and Rembrandt to Raphael—even Warhol, a lodestone of the new Modern addition. The Museum of Architecture replicates cities in miniature from Paleolithic gatherings to the metropolis of the future. Its neighbor, the Communications Museum, organized a daring exam of anti-Semitism. Portraits of Orthodox saints glitter from their golden collars in the Icon Museum, while the Jewish Museum unfolded diggers’ finds from the former ghetto, displayed with accounts of its checkered history. For über-modern, hit the MAK, which out-Walkers our own avant art.

Then head to bars, clubs, saunas, and shops saluting leather and lace (and even a women’s boutique for men—Transnormal—in boys’ town, aka the Bermuda Triangle: the northeast corner of Alt Stadt). Grab the GLBT magazine GAB for what’s hot. Gay walking tours also are offered, and July’s Christopher Street Day is legendary. For info, see www.libs.w4w.net (lesbian), www.lskh.de (GLBT), and Switchboard, www.switchboard-ffm.de. General info at www.frankfurt-tourismus.de. 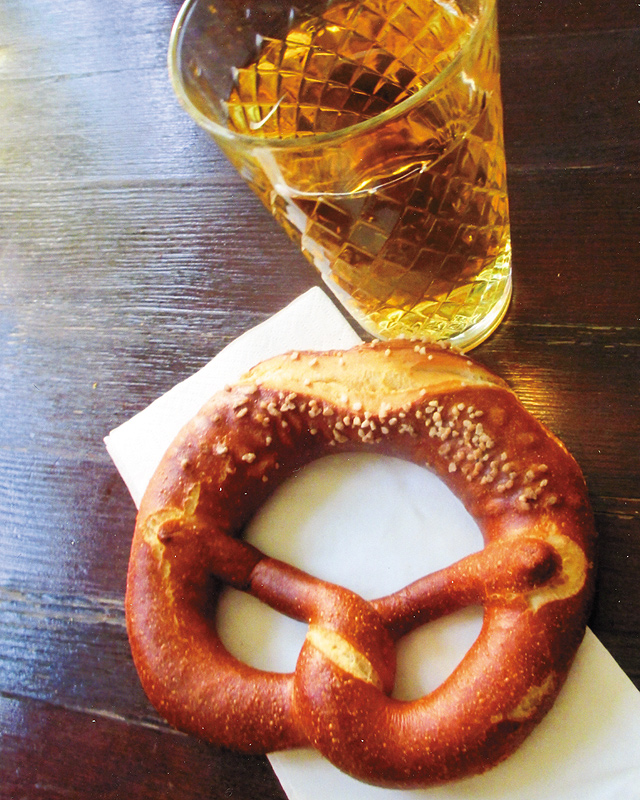 Nonstop flights deliver you from MSP to Frankfurt. From the airport (or city) train station, explore some of Germany’s UNESCO-cited wonders, starting in Trier, its oldest town, founded by Emperor Augustus and called “the Rome of the North” for 500 years. An old Roman storehouse now houses senior citizens. Sign up for gladiator lessons in the vast amphitheater, whose stones seated 30,000. Prowl the underground passageways where contestants readied for the fight.

Emperor Constantine’s Imperial Baths once served as the gossip center-cum-spa of its day, watered by a formidable aquaduct; today, wander among the ample chambers, softened with grass. The time-blackened Porta Nigra Gate, remnant of the Romans’ city wall, serves as Trier’s beloved icon. It anchors the main drag, marshaled by half-timbered homes-turned-shops and Baroque mansions in candy colors. A medieval pilgrim’s cross, marking the market square, stands atop a Roman pedestal. 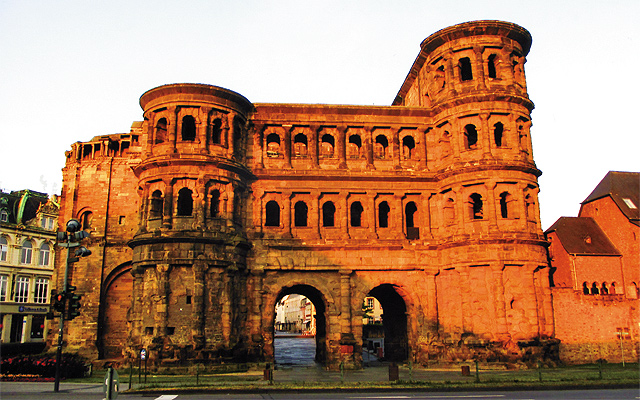 Those Romans led a life of luxe, as documented in the Archaeology Museum’s unearthed treasures like floors of intricate mosaics, a mountain of gold coins (the most discovered anywhere in Europe), marble busts of the rich and famous, and even an itty-bitty leather bikini.

Constantine’s Throne Room has been co-opted as a Catholic basilica, extended in the 1700s with a wedding-cake palace. Trier’s great cathedral, built with stones from the Roman wall—a jumble of add-ons that looks more like a fort than a holy site—is not Roman, but Romanesque. Plus Gothic. Plus Baroque, as in the interior dome, from which sculpted figures scramble as a stony trumpeter toots. The cathedral boasts as its most prized relic the robe of Jesus. But good luck trying for a glimpse: It’s ensconced in a golden case viewed only on the most holy of days.

Two millennia after Constantine, the Emperor’s antithesis was born here—a man whose life’s mission was to replace Imperial power with power to the common man: Karl Marx. Tour the home of the journalist whose Communist Manifesto set the world ablaze, aided by audiophones to liven a lot of stand-and-read displays. 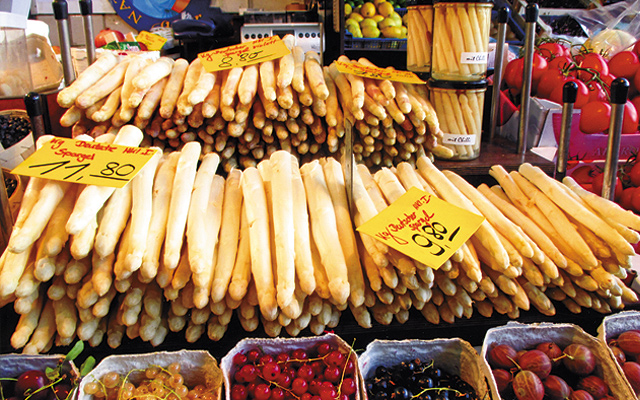 Spargel, it’s the season of white asparagus in Germany. Photo by Carla Waldemar

Volklinger Ironworks, in that river city, is Germany’s first industrial-heritage UNESCO designation, saluting a behemoth factory employing 80,000 at its height. Blast furnaces have belted out iron here since 1837, including armaments for both world wars. Trace the entire process, self-guided or in the wake of a guide. The majestic machinery alone wore out my camera’s trigger finger. Bonus: Part of the space serves as gallery for an emotional photo display of German Reunification 25 years ago.

Aim straight east to Speyer and its UNESCO-cited cathedral—biggest in the world when built in 1030, erected in the Emperor’s home town, just because he could. Today its Romanesque beginnings are embellished by 19th century “improvements” (or not). Eight kings lie buried in its crypt. Speyer’s tiny Jewish Quarter—first pogrom in 1096—will gain UNESCO status in 2017 for its newly excavated synagogue, school, ritual bath, and homes. Break for dinner at the town hall’s rathskeller, where I found my favorite word in the German language—spargel!—on the menu. This springtime treat promises logs of white asparagus served with boiled potatoes and all the Hollandaise your conscience permits. Toast it in Riesling, of course. 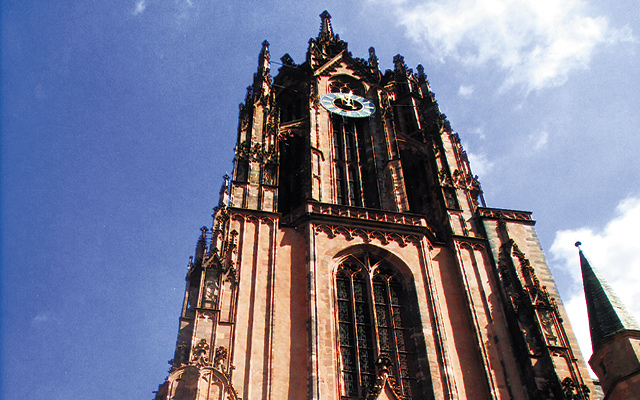 Twenty miles south of Frankfurt lies another unexpected UNESCO treasure: Welterbe Grube Messel, or the Messel Pit. While serving as a quarry, diggers came upon fossils by the thousands, nowadays to ogle via an archaeologist-guided tour: miniature horses the size of collies; a monkey; a crocodile; fossilized animal poo; and plenty of vegetation captured in stone: grapes, coffee beans, and other signs that a rainforest was the pit’s first tenant. A museum completes the story.

Rudesheim is a classic, postcard-perfect half-timbered town on the Rhine River, worth a gasp of awe even if UNESCO didn’t tap it—but it did, for the landscape itself, with grapevines upholstering hills spangled with crumbling castles and lacy spires of churches. Board a cruise boat for a lazy float through the landscape. Or climb aboard a funicular to glide above grape vines marching up the hills to Niederwald—a forest peak overseen by Germania, statuesque emblem of the fatherland—a don’t-mess-with-me Wagnerian goddess rising 30 meters high.

Trace the town’s alleyways bearded with wine cellars to Restaurant Rudesheimer Schloss, where the family Breuer has spoiled guests at their restaurant/hotel since 1952, arm-wrestling appetizer platters bearing homemade everything: sausages, pâtés, smoked fish, pickled asparagus. Then order the classic duck with red cabbage to assure you’ll overtake Germania. Dance it off to the oompah combo playing oldies like “Blue Bayou.” Plan your tour at www.germany.travel.com.