From Child Star to Music Artist: Blake McIver All Grown Up 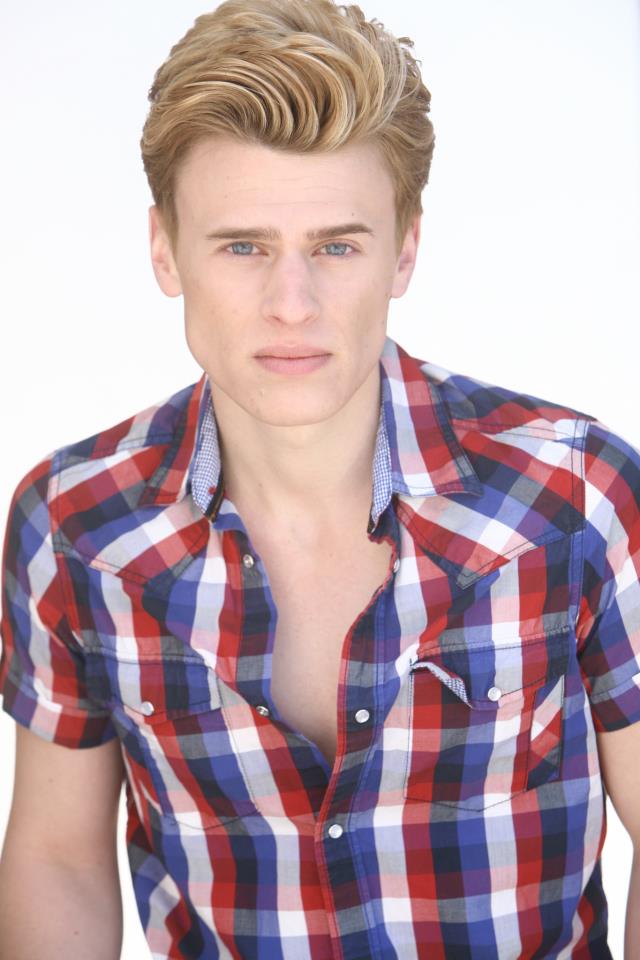 Many know him as Waldo from the 1994 film The Little Rascals, while still others know him as Derek, Michelle Tanner’s foe-turned-friend on the sitcom classic Full House. But this child star is all grown up and going after his dream: music. Blake McIver recently released his new album, The Time Manipulator, and the road to release has been quite the interesting ride.

While some ex-child stars come to regret their time in the entertainment industry, McIver embraces it. “I wouldn’t have changed a thing about how my life went,” he says. “I was one of those lucky ones—I wanted to do it, I wasn’t pushed into it. I had parents in the industry who didn’t want me to do it, but I pushed and pushed. It afforded me a journey that I wouldn’t trade for anything.”

Of course, being recognized for playing “villains” as a child must have scarred young McIver for life, right? Wrong. According to him, it was fun to always play the bad one, but he did end up getting typecast as the outspoken villainous character. He says, “Now i think it’s hilarious, but at the time I thought everyone was going to hate me and think I’m a joke. That wasn’t the case obviously, but I thought about it.”

In fact, audiences embraced him. His stint on Full House began as a guest-spot for one episode and turned into a three year gig. The producers had seen young McIver perform on Star Search and wanted him to bring his act to the sitcom, writing a patriotic Yankee Doodle Dandy feature. To McIver’s delight, as a fan of the show already, they decided to make his feature into a recurring character. Describing the experience as unreal and magical, he called it “one of those show business dreams.”

At such a young age, it’s remarkable that McIver was able to be cognizant of the sheer star power that surrounded him on the set. Having grown up with parents in the industry, McIver was very much aware of how the system works and who the adult actors were. “I can remember being on set for The Little Rascals and we had Lea Thompson do a cameo,” he says. “The other kids not even having a clue who she was, but I remember not being able to speak in the same room with her.” 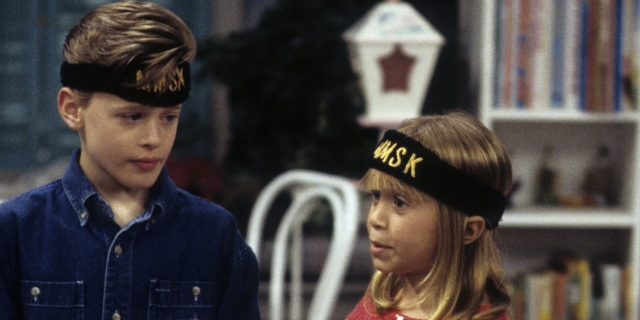 Blake McIver as Derek (left) opposite the Olsen twins’ portrayal of Michelle on Full House.

By the time McIver made it to Full House, he must have gotten over those costar jitters because he shared many laughs when the camera wasn’t rolling. He says, “What people can’t imagine is that it was so much funnier between takes and behind the scenes. Watching them now, the stuff that they would say between takes was hysterical—it’s amazing that we ever got a full take of a scene.”

Most people hate seeing videos of themselves and hearing themselves speak. McIver is no exception and tries to avoid seeing reruns of his appearances on TV, although every once in a while somethings slips through the cracks. “It’s always jarring. It’s very funny. My nieces call it Baby Blakey. When I see myself it’s like a different life and a different person.”

So what has McIver been doing since his days as a child actor? Turns out, he’s had a lot on his plate. Transitioning from child actor into adult star is no easy feat; just ask any of the child-star-gone-wrong cases that plague the 24 hour news cycle.

McIver explains, “There is that moment when you realize, ‘Oh my gosh, was that as good as it’s ever gonna get? Am I ever going to achieve more as an adult than I did as a kid?’ And that’s a really scary thought.”

Worry not, Blake. McIver says he has reinvented myself quite a few times since he was starring opposite Mary Kate and Ashley Olsen. Even though people are still obsessed with the memories of him as a kid (who wouldn’t jump at a chance to ask him about the Olsen twins?), his life looks completely different now. His number one career focus now is music with the next step being going on tour.

The Star Search winner has always held music as an important part of his life while the acting came secondary. According to McIver, it has taken him 23 years to get back to doing his original and true passion: music. At 19, McIver sat down and experimented with writing and, along the way, realized that he has stories to tell and the best way to express himself is through song.

But why has it taken the (now) 29-year-old so long to release his album? Funding. “I didn’t want to do a Kickstarter campaign or ask people to make my art for me,” McIver says. “This option presented itself, and I didn’t think too much about it at the time, but then people found out about it and it became a thing.”

The “it” that he speaks of is working as a go-go dancer to pay for the album’s production. Getting involved for the money, McIver says the byproduct was realizing how many personal hang-ups he had in the past and working as a go-go dancer got him over those hang-ups in a visceral and quick way. He describes it as empowering to realize he was comfortable in his own body.

Thankfully it’s changing in our culture so rapidly, but there wasn’t really any sort of young, gay role model to say ‘This is what it looks like’ or ‘This is what I aspire to.’ You’re just hearing the negativity or the bad things,” McIver shares. “So I had kind of crafted this image of myself. I struggled with body dysmorphia and in college I barely ate. Sometimes that happens in the young, gay mind: ‘I just have to be skinny. Being thin is the most important thing.’ It’s a messed up, twisted way of thinking. When I realized I could own my own body and train it and do with it what I wanted to and make my own decisions, it was incredibly empowering.” 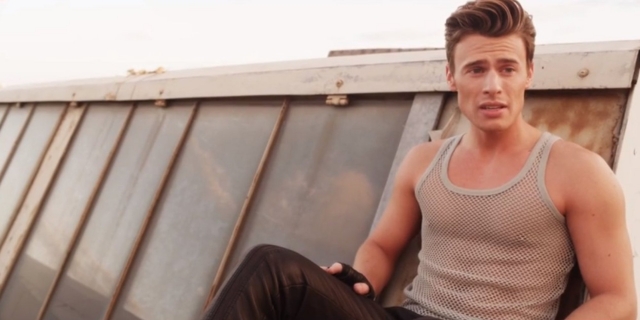 It’s clear that McIver has grown into embracing his body, even going shirtless in the music video for his first single, “Wish I Didn’t Need You.” The Time Manipulator is a pop album, but definitely draws inspiration from all of McIver’s favorite genres and periods: classic rock, electropop, R&B, and even gospel, creating a sound that isn’t heard on the radio today. With a lyrical theme of empowerment and self-compassion, McIver hopes that wherever the listener is on their journey, they will be able to hear a story that they can relate to.

This venture into music doesn’t mean that McIver is giving up acting. Music has always been his touchstone; McIver describes music as how he feels closest to his soul and spirit, but it very much informs him as an actor. The actor is still going on auditions, never able to completely walk away from acting even though music has become his main focus. In fact, McIver has even ventured into the reality TV realm.

Bravo’s The People’s Couch enters the living rooms of households of real people including some celebrities (like McIver) and films them watching and commenting on popular shows and news from the past week. The half-hour, unscripted series delivers the buzziest watercooler moments by showcasing avid TV watchers in their homes, as they laugh, cry, talk, gasp, and scream at their TVs.

McIver got involved when his friend, Scott, knew someone in production who asked if he had any friends that would be interested. McIver laughs when he talks about this because when the producer called Scott to ask, McIver and a third friend were actually on their way to Scott’s to watch TV.

When McIver heard about the concept of the show, he was skeptical. “I was like OK, this is the end of civilization; we have reached the bottom of the barrel. But it was sort of this amazing and interesting social commentary and sociological experiment. It became this crazy, funny, interesting thing that had more depth than I ever imagined it being.” 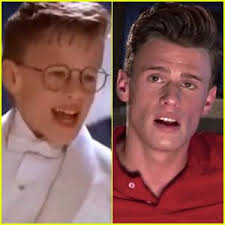 Blake McIver then and now, in The Little Rascals (left) and The People’s Couch (right).

Although McIver and his friends are hoping for a second season, that doesn’t mean a reality show career is in his future.  “What I love about our show is we really do get to be ourselves and watch TV and there are no boundaries. They’ll edit what they want out of what we say. With all of these other reality show brands, it’s so structured and they can paint you in any picture; it’s all about the drama and fighting, but with our show it’s not.”

Being able to sit on a couch with friends and watch TV as per usual doesn’t sound like a bad gig. Especially for McIver, who describes himself as an avid TV watcher. As a huge fan of Mad Men, McIver is “dying for them to bring back the final season” next spring. However, in the mean time he is content with watching a certain competition show. He says,  “I’m like a So You Think You Dance groupie, I swear.”

With all of McIver’s clocked screen time (both as a child and now being featured on Bravo) as well as a blossoming music career, it might seem remarkable that he was able to come out of the closet without much attention. He says, “When I first came out it was to zero fanfare, it was just to my friends and family. You know, I wasn’t really in the public eye. I wasn’t in the media. There was no sort of buzz around it until I started doing this reality show on Bravo and a couple of the blogs recognized who I was and ran these stories. And it was this huge coming out last fall and I was like, you guys, this is not news.”

In the same breath as saying it isn’t news, he goes on to explain that he does hope that his story will help other gay people, especially those who might be in similar situations as he was growing up: without many young, gay role models. “If I can help a young gay person to feel more comfortable about themselves and to feel like there is a better hope and a better future not living in the closet, then it’s all worthwhile.”

Blake McIver’s album, The Time Manipulator, is available now on iTunes and Amazon.