From Bunny Hill to Mountain Top: National Learn to Ski and Snowboard Month

Hollywood loves to romanticize winter sports: snow bunny couples skiing down the hill, warming up with a hot chocolate in the chalet, and maybe hitting the slopes again before the screen goes black. Turns out, that idyllic image isn’t far from reality here in Minnesota.

The 18 members of the Minnesota Ski Areas Association have made it their passion to turn people who are new to skiing or snowboarding into lifelong lovers of the sport. With January being National Learn to Ski and Snowboard Month, there is no better time to leave the house and grab a spot in one of their group or individual lessons. 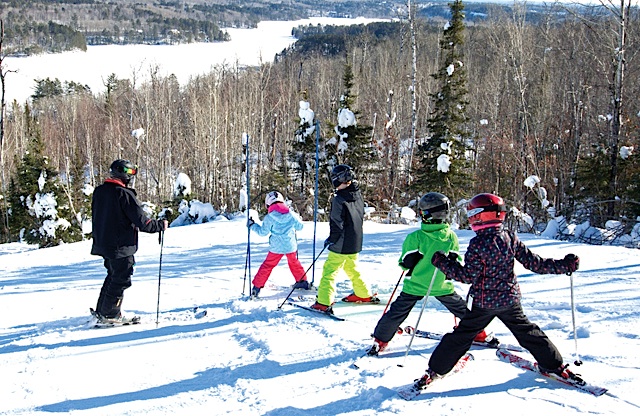 Denny Cunningham, a ski instructor at Wild Mountain in Taylors Falls, Minnesota, has been skiing for more than 40 years, but he had a rocky start. “My first-day attempts were quite embarrassing,” he says. “My only instructions were rather brief in the rental shop as I was struggling to put my boots on. The learning area was a little hike from the chalet across the top of two other runs. I decided it would be easier to put my skis on rather than walk carrying them, which turned out to be a big mistake. My direction seemed to be more down the slope than across the slope, and soon I decided to just ‘go for it.’ Not my best decision, I lost track of the number of times I fell before reaching the bottom.”

But times have changed. Wild Mountain offers one-hour lessons for first-time skiers and snowboarders, introducing guests to basic skills for a successful first experience on the snow-covered hills. “For those who have decided they would like to take the next step and become more confident on a variety of slopes, we offer a progressive learning experience in our Get Hooked on Skiing or Snowboarding program,” Cunningham says. “Designed for first time skiers or boarders only, the program includes three days of lift and rental along with two hours of coaching on each of the days for only $129. Upon completion of the program we have a graduation present: a complimentary season pass for the remainder of the season.”

The same attention to the learner’s needs is a passion of Luke Williams, Snow Sports Director at Elm Creek and Hyland Hills in the metro area. “If you’ve never skied before, we’ll get you up on the slopes either skiing or snowboarding,” he says. “We will have a lesson that will fit your needs and ability level.”

Williams says, on average, someone new to the slopes will take two or three lessons (that last an hour and a half) before they’re ready to be safe and comfortable on the hills by themselves. “Somebody that plays hockey or soccer, or rollerblades, those are three sports that the cross-over skills are very similar,” he says. “Ice skating and rollerblading, for example, have very similar foot-to-foot movements that a skiing person would have. Somebody that wakeboards or skateboards, those cross-over skills help them out if they’re going to be snowboarding; they’re very similar movement patterns for what they’re going to be doing.”

In general, Williams believes skiing is easier to learn at the front-end, but harder to refine once you get into the sport, whereas snowboarding is harder to learn at the beginning but easier as it goes on. But Cunningham says the learning process actually begins in the rental area, before even touching the snow.

“Fitting the guest with boots and skis properly is a very important first step; it can make or break that first experience!” he says. “After meeting your instructor and other guests in the lesson, the instructor will introduce you to your equipment, the different parts of each piece and their function, how to put the skis and snowboard on and how they have been designed to make your learning experience easier.”

Following some work on flat ground, the group will move to a small hill to apply some of the skills picked up thus far. But don’t be afraid that the lessons will progress too quickly; both Cunningham and Williams express a commitment to meeting learners where they are, and keeping a pace that they are comfortable with. “We take everything nice and easy, move at the pace of whatever the student or group is at,” Williams says. “We spend time on the bunny hill, making sure they’re comfortable turning and stopping.” 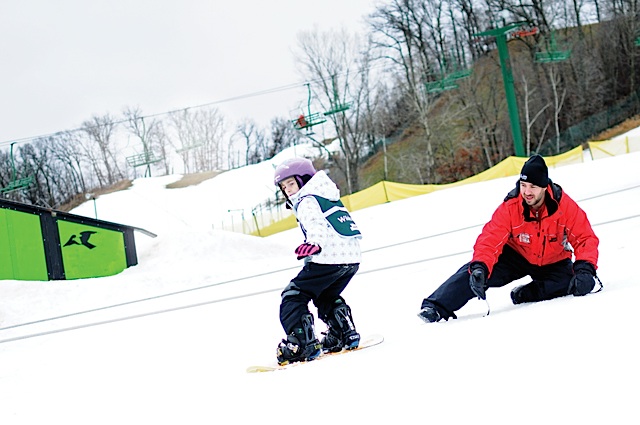 But for some, the worry begins before even making it to the ski area. Winter sports like skiing and snowboarding have long been associated with the wealthy. Often cast as an expensive sport, Cunningham says that’s not the case. Equipment rentals are readily available, taking the edge off of buying new equipment; and coupons, packages, and specials throughout the season make saving money even easier. The price of a lesson, for example, includes the instructor’s time, lift ticket, and the equipment rental, making an entire afternoon on the slopes cost less than $50. During Learn to Ski Month, Wild Mountain’s ski lessons will be offered at only $10, and at Elm Creek and Hyland Hills, Williams says learners get a complimentary lift ticket and rental after completion of a three-lesson series.

Aside from cost, many adults are hesitant to strap on a pair of skis because of the common rhetoric of people skiing their entire lives. But Cunningham says most adults who begin taking lessons do so at the encouragement of family, friends or co-workers. He shares, “A long-time middle-age office employee working at Wild Mountain used to look out the window and wonder aloud, ‘What do all those people see in skiing?’ Over time she began to make note of the fun they appeared to be having, and soon was wondering if she would be able to ski. With a little encouragement and an occasional lesson she is now an avid skier; if you can call 100-plus days a season avid!”

According to Cunningham, the two biggest arguments he hears about skiing are looking foolish or getting hurt. In both cases, taking a lesson goes a long way toward a successful outcome. “When you see a skier or snowboarder coming down the slope arching effortless, graceful turns down a steep challenging slope, he or she more than likely started in the same place as you.” he says. “As for chance of injury, I could give you statistic after statistic showing snow sports to be safer than most other sports or even day-to-day activities. My best advice: take a lesson and practice safe skiing or riding.”

Following a day in the snow, warm up in the chalet, relaxing with friends over food and drink. What sounds better than sitting by a fireplace sipping on some hot chocolate?

ENDNOTE
Minnesota Ski Areas Association Members
Find the ski area nearest you and hit the slopes! With 18 locations throughout the state, there is always a lesson just a day-trip away.