Fringe Review: “Artificial” is a Spellbinder with a Conscience 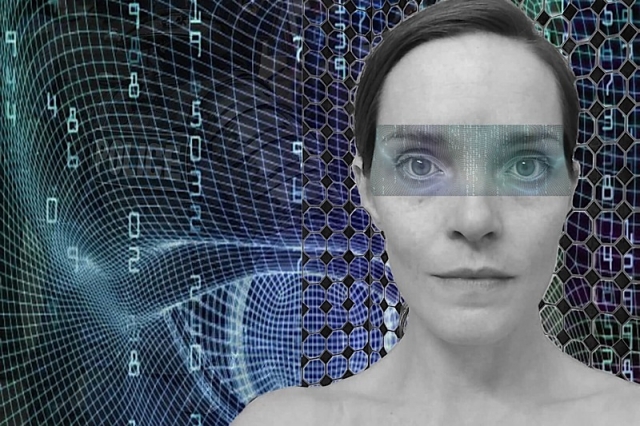 Matthew Stoffel’s spellbinding drama, Artificial, presented by Hercules Theatre Company, is a remarkably superior play about ethics and artificial intelligence. A resplendently magnetic Kelly Danger leads a crackling cast as Athena, a robot that (or should I say, who) is the brainchild of one Dr. Quade, played with a sense of conscience that burrows into the heart and and mind, by the first-rate Kali McMillan. The creator is resolute that Athena is to be used for domestic law enforcement, but not for militarism. However, when Athena pivots into responses the creative team doesn’t expect, one starts to wonder if Quade has created something more akin to human life rather than high tech advancement.

When a corporate bigwig (a perfectly scurrilous Grant Hooyer) demonstrates the nexus between big business and big government, Quade and her two assistants, played with sparkling interplay by Laila Sahir and Brad Krieger, are caught in a profound ethical crisis.

Danger and Tim Williams as a military observer astound in a scene that reminds us that the power of artificial intelligence has palpable consequences. You’ll have to see the production to see how that plays out.

Unlike other better known but lesser works on AI, such as the film, Her, and the play, Marjorie Prime, Stoffel’s Artificial is very clear that high tech isn’t just about being trendy, cool, and profitable. AI progress may be inevitable but It comes at a price and with a moral mandate for a kind of gripping responsibility that Dr. Quade and her assistants try their personal bests to live by. Director Jonathan Fondell has crisply illuminated the ethical dimensions and has made sure we’re enthralled from start to finish.