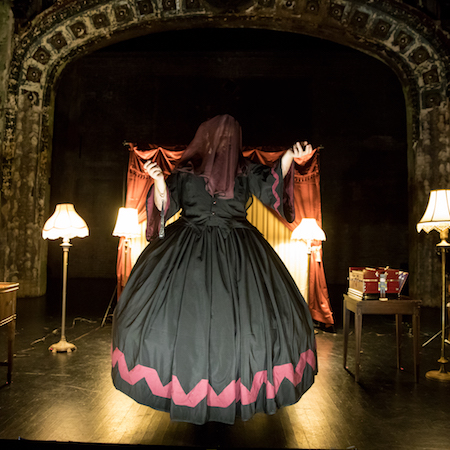 A Confederate Widow In Hell. Photo by Dan Norman

A Confederate Widow In Hell. Photo by Dan Norman

Willi Carlisle delivers a bravura central performance as the ghost of a woman who died in the Civil War era. Or as some from the world of this play would call it: the War of Northern Aggression. The actor captures a visceral sense of a woman so oblivious to her privilege that she obviously fails to recognize the cruel lens through which she saw life and how she acted on it. In other words, in her post-death spirit state she is none the wiser. Therefore, it’s understandable that her spirit is still stuck down in the world where she didn’t get the message that her value system has gone with the wind.

Carlisle also has remarkable command of archaic language and sentence structure drawn from A Confederate Widow in Hell’s primary sources. This qualifies him as a first-rate classical actor. Joseph Fletcher adds sardonically absurdist support as a headless spirit on the periphery of the widow’s central stage action. Directed by Laura Shatkus with an exquisite eye to the look of the period and how language affects thinking, and thence, action.
A Confederate Widow in Hell
Through Aug. 10
Southern Theater, Minneapolis
www.fringefestival.org