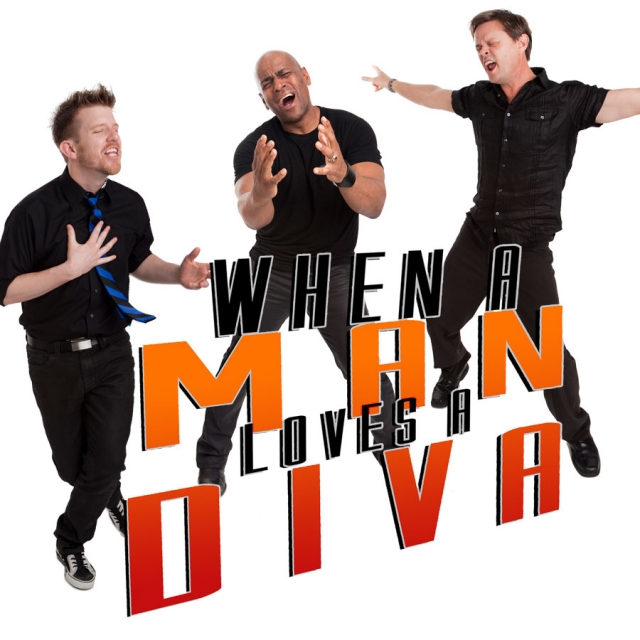 When A Man Loves A Diva pays tribute to iconic women singers of roughly the past 50 years. Though the show has played before, there are new selections that reflect our own 2012 vantage point. What would not have been really nostalgic only three years ago when it last played at the Lab, now does indeed have a nostalgic feel. Yes, we are getting older.

But the spirit of the show’s trio is as vibrantly uplifting and splendidly sung as it was before. In fact it actually has an even more epic feel given the broader range of music. Dane Stauffer is like a master of ceremonies who infuses a fabulous campiness deftly balanced by his co-performers, Ben Bakken and Julius Collins III. Stauffer’s turn as Cher singing Gypsies, Tramps, and Thieves captures that quality hilariously.

Bakken challenges us with his view that Adele merits induction into the Diva Pantheon even though she hasn’t been around that long. The trio sings a number that only uses the band and the sounds sung by female backup singers and it still holds its own quite effectively. And a rock n roll medley totally rocks.

Collins shares with the audience how women have taught him about courage and the need to speak your truth. And no matter what your gender, that’s a fundamental value. This hits at the show’s core intent. Director Andrew Rasmussen does not have them imitate women, but rather has them acknowledge, embody, and honor women’s spiritual power and love for humanity. The tunes as sung, bring home the fact that men can relate to what’s being sung as immediately as women. Music, after all, is universal.

You won’t find typical tunes by Barbra, Liza, and Diana. But you will hear beloved songs sung originally by others you might not associate with this sort of revue: Bonnie Raitt, Pat Benatar, and Helen Reddy. And Collins’s tribute to Whitney Houston is simply beautiful.

The all male band is led by Sanford Moore whose vocal arrangements are brilliant. James A. Young on bass, Steve Jennings on drums, Geoff Lecrone on guitar, and Moore on keyboard, enhance the production perfectly. The creative team of Moore, Stauffer, and Mary Kelley Lear have given birth to a fresh and invigorating new way of reflecting on tunes we may have previously heard but not really listened to. This makes for a numinous theatrical and musical experience.