Fredericksburg – Deep In the Heart

I’m deep in the heart of Texas, reliving the refrain of the ’40s cowboy ballad. The stars at night are big and bright, just as he promised. And as we drive along, I mentally supply the clap-clap-clap that interrupts each verse (thus banned on the British airwaves during WWII because of potential injury to listening factory workers, who couldn’t resist adding their applause, true story). 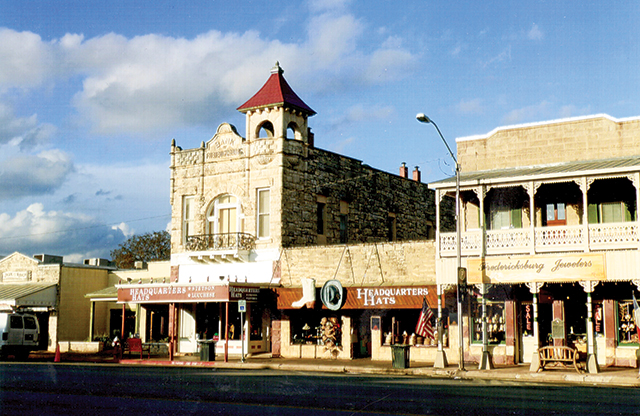 Anyway. We’re driving through Texas Hill Country, rather than the famous flat-as-a-flapjack plains. Here, the terrain is too rolling for cattle ranchers. The only longhorn I spot belongs to a deer.

This is the corner of America where upstanding farmers from Germany were invited to settle in the mid-1800s, encouraged to grow peaches, grapes and such on the vast terrain surrounding the town they founded (Fredericksburg) where today “Wilkommen” signs still flourish and local businesses flaunt “Haus” in their titles.

Those original immigrants lived too far from the outskirts for their ox teams to make the trip and back in an afternoon, so farmers were awarded a tiny lot in town as well, where they erected Sunday Houses: one-room cottages of lumber or limestone (no water, no heat) with maybe a loft for the kids to sleep, reached by an outdoor ladder. Thus the pious Germans could conduct their Saturday business, enjoy a beer that night, then attend Sunday church before heading home.

The bonus is, many of these iconic dwellings still remain, renovated inside to serve as shops, cafes, and B&Bs. They’re easy to spot as you amble down Main Street and its environs, armed with a self-guided walking tour map, or, even easier, a trolley tour departing from the tourist office. Its narrator stops for a peek into St. Mary’s Church of 1908, called a “painted church” in honor of its shimmering stained-glass windows, each with a German inscription. We then ogle the White Elephant Saloon from 1827, which now serves as an inn and wine-tasting room, neighbor to many humble-to-fancy dwellings built in Fachwerk style (x-beamed exterior timbers filled in with stone rubble). Also noteworthy is the original jail, big enough for a single miscreant.

For a more in-depth immersion, head to Main Street’s Pioneer Museum, a landscape of buildings original to the site plus those moved here to preserve them. Step into a one-room schoolhouse; a furnished Sunday House near the windmill that drew its water; the communal bathhouse-cum-barbershop; and more. Audio descriptions of the lifestyle spring forth as you cross each threshold, enhanced by guide Evelyn Weinheimer, who points to the steamer trunks, kids’ toys and musical instruments as familiar household objects when she grew up here.

Nearby stands the Vereinshaus, a unique eight-sided building and sometimes-church, constructed to be able to spot possibly hostile Indians’ approach from any direction. Today it houses objects brought from Germany with those original arrivals: rifles, branding irons, and cookie cutters, plus an intriguing Luther Bible from 1665. 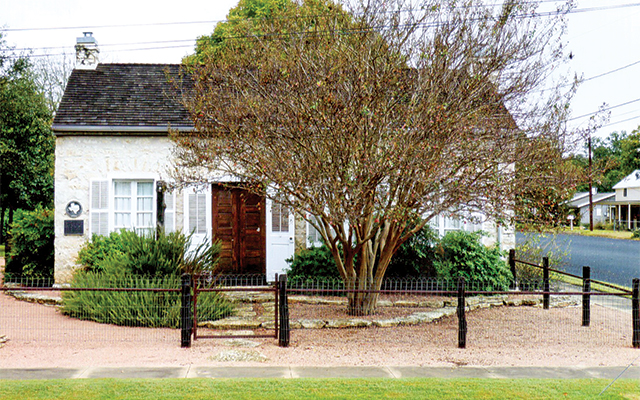 Another Sunday House of a more affluent German settler. Photo by Carla Waldemar

Then there’s this surprise museum, the National Museum of the Pacific War, launched in 2009 amid the land-bound Texas hills. Here? Why, one has to ask? Well, because this is the hometown of World War II’s Admiral Nimitz, who commanded the Pacific’s operations. (In fact, the Nimitz Hotel of 1860 — a stagecoach stop back then — still dominates Main Street, just where its proprietor, the Admiral’s grandfather, erected it.)

I’d planned to spend a couple of hours in the museum, but be advised: It wasn’t half-enough time to absorb the story, retold by newsreels of the time, participants’ oral accounts, models of warships and the opposing fleets in action. See the submarine that attacked Pearl Harbor while gunfire and flames erupt behind it on a wide screen. Continue to the impossible battles on the Philippines, Wake, Guam, Bataan, Iwo Jima, and other islands nobody’d ever heard of before. The museum also honors the story of Japanese-American citizens ruthlessly forced into internment camps here in the U.S.

Visitors also descend on Fredericksburg for its near-endless shopping ops. Main Street is pack-pack-packed with 150 indies (no chains allowed in the Historic District), each eager to sell you faux-cowboy everything. I succumbed (bad girl!) at one of its galleries supporting local artists, such as Insight, housed in a 1907 dry-goods store whose high tin ceiling and limestone walls support 60 regional talents. River Rustic celebrates another 50 artists whose works center on quirky contempo pieces such as the Flag of Texas, constructed out of bullets, and cigar-box purses.

Or venture a bit off the beaten track to Magnolia Pearl, built of salvaged barn wood, with its filmy, romantic unisex clothing displayed on, say, a piano keyboard or antique bedsteads. If you, too, wish to look like a Merchant Ivory starlet, they’ll ship you “pick boxes;” simply return what you don’t fancy. 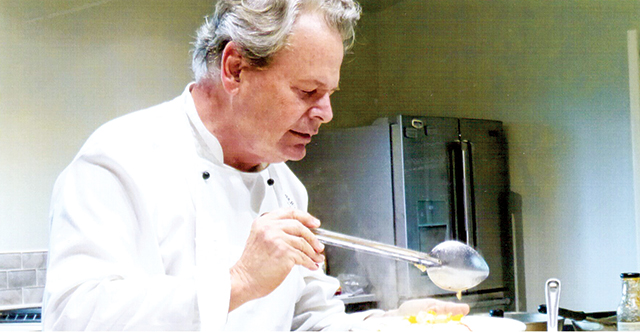 Fisher and Weiser’s, the chef demos shrimp and grits. Photo by Carla Waldemar

Thirsty by now? This is no longer solely Dr. Pepper country. Not only does Texas sport over 400 wineries, but, here in Fredericksburg, the first-ever Texas brewery: Fredericksburg Brewing Company, launched in 1994. Today its Not So Dumb Blonde leads the list, followed by Peace Pipe Pale Ale and Pioneer Porter. Munch on beer-infused meatloaf and cheddar soup too. Or stay in the upstairs B&B, where the second “B” signifies not “breakfast” but “beer.”  Pedernales Brewing Company came upon the scene five years ago with Texas lager as its flagship pour and dark Lobo Negro its medal-winner.

Food, you ask? It’s DIY at  Fischer & Wieser’s Culinary Adventures Cooking School, owned by Mark Wieser, who grew it from a log cabin ca. 1870 (“You paid $150 for that?” declared his shortsighted mama as she smacked him upside the head.) The kid used it to sell peaches from the family property. Then, while later teaching school, hired on a student named Fischer, who had one of those eureka moments that led to marketing jalapeno jelly; the first to introduce that addictive pepper to the American palate, resulting in the outfit’s now-legendary national best seller: roasted raspberry chipotle sauce.

You’ll find it, and many offshoots, in the company’s retail shop, aside which stands a cooking school where guests learn how to make, then enjoy, a three-course meal. Ours led with Frito pie (Texans need no explanation. For the rest of us, it’s chili mixed with those corn chips), then shrimp and grits, and finally Peaches (no surprise) Foster.

Where else to eat? An upscale/minimalist site called Otto’s German Bistro for a foie gras BLT or frikadellen (bison patties with blackberry reduction and Dijon caper gravy) followed by duck schnitzel with spaetzle, red cabbage and paprikash sauce; or wild boar goulash aside savory bread pudding. Try the Old German Bakery for Teutonic treats from the oven. And then there’s a sweet haven called Vaudeville, below-stairs in an accessories shop of the same name. Here, succumb to the fancy baked goods or the likes of a Brussels sprout/pork belly flatbread (a wholehearted yum) or elaborate, and sublime, BLT. Don’t forget the coconut/blond raisin rice pudding.