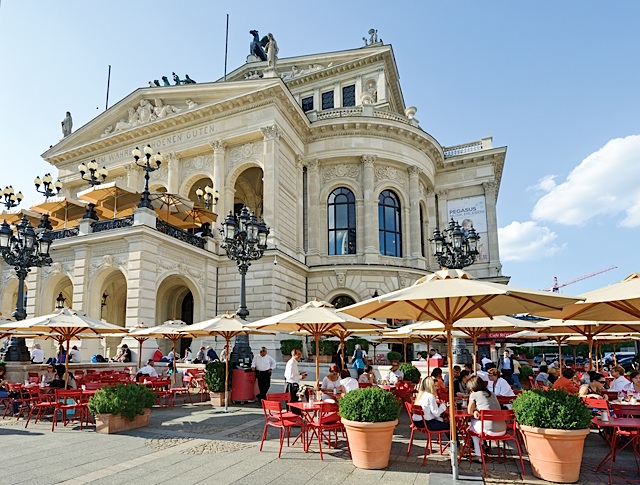 Frankfurt is ready for its closeup. Visitors to Germany often fail to venture beyond the city’s airport or train station before rushing off to their intended destination. Big mistake.

There’s more to discover than those shiny skyscrapers lining the River Main that bred nicknames like “Main-hattan” and “Bankfurt.” Yet the city’s Old Town is as charming as many in the land. Add a boho district where off-center is a way of life and a roster of museums that rival—nay, surpass—those of many a European city. And there’s food, both traditional and trendy.

Above all, there’s the factor Frankfurters claim makes their city percolate: its diversity. “We embrace our contrasts,” they boast. Thus, a red-light district in the shadow of those towering banks. Diversity, too, as in a busker playing Bach on his accordion and a coffeehouse that sells underwear.

Where to start? Right along the riverbank that flourishes as Frankfurt’s Museum Row. The Stadl serves as grande dame of bold-name painters, from Raphael to Fra Angelico, Rembrandt to Monet—then, ta-da!—a wing as contempo as tomorrow, with works like Andy Warhol’s portrait of poet Goethe.

Wander on to Liebighaus, shining light on sculpture since time began (think: Egyptians) through the Renaissance. Then museums devoted to architecture, to film, to Jewish history, and to the city’s history, including a topographical map of Frankfurt before and after its near-destruction in World War II.

After that destruction, what? Frankfurt’s citizens chose to rebuild the Old Town exactly as it had stood for centuries, starting with Romer, the town square that serves as its epicenter, anchored by a Gothic City Hall, where wedding parties stream in and out (Adam and Steve among them). Nearby, St. Nikolai Church, erected in the 13th century, welcomes visitors to its tiny chapel. 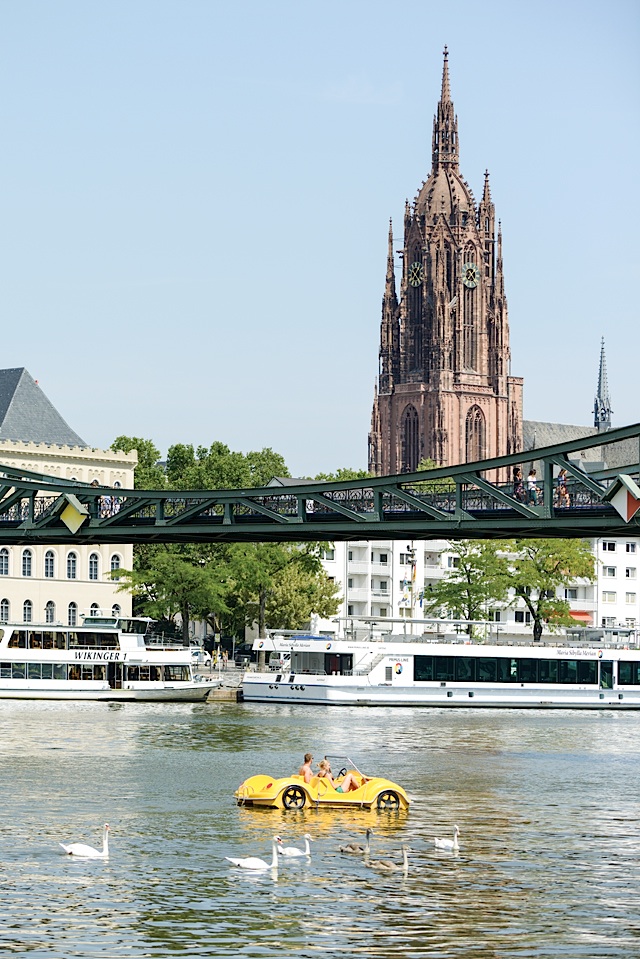 On the cobblestone square, mimes perform, balloon sellers wander, kids chase pigeons, cafes peddle beer and brats, and a marker remembers the Nazis’ book burning right here in 1933. In today’s happier times, it hosts the city’s famous Christmas Market. Behind it stretches Spargasse, a lane lined with fanciful buildings as envisioned by futurist architects. And beyond, the lacy Gothic spire of the grand Cathedral rises.

St. Paul’s, nearby, has segued from church to center of democracy. It’s here, when the Holy Roman Empire collapsed, that Germans held their first-ever elections. Here, too, JFK delivered a now-famous speech in 1963. Turn a few more corners and there’s Goethe’s House (well, an excellent post-bombing recreation), open to tour.

Ready to drop unless you shop? Step onto the wide, pedestrian-only avenue called Zeil, home to every brand name known to man and people-watching as looky as the fashions. For offbeat, indie boutiques, cross to the opposite side of the river, where the neighborhood called Sachsenhausen provides eye candy.

It’s also in this corner of the city that old-time taverns deliver refreshing quaffs of Frankfurt’s famous apple wine, delivered in gray earthenware pitchers. Daheim in Lorsbacher Thal, which opened its cellars in 1803, even offers flights of this hard cider, ranging from crisp and tart to gently sweetened with a touch of quince. While away an afternoon in its courtyard with a matching flight of unique snacks, including hand cheese, sausage salad, and the city’s signature green sauce, lush with herbs. Eat it with hardboiled eggs and potatoes, or wander over to Wagner’s (in business s since 1931) where it sides a schnitzel.

Back across the river, a stop at Klelnmarkt Hall is a must. Patrol scores of stalls selling everything good to eat from cheese and sausages to buns and fruit, then take your picnic to the open-air balcony. Leave room for dinner deluxe at the fine-dining (but relaxed and inviting) restaurant within the Grandhotel Hessischer Hof, once the mansion of a noble and furnished with the family’s antiques. Sip wines from their nearby vineyard while you sup on supple beef tartare or grilled scallop adjoining avocado salad and chimichurri, then veal three ways (filet, foie, sweetbreads) or cognac-flamed salmon with kohlrabi, kimchi cucumber, and wild rice. Dessert? Can’t resist the cheese cart. 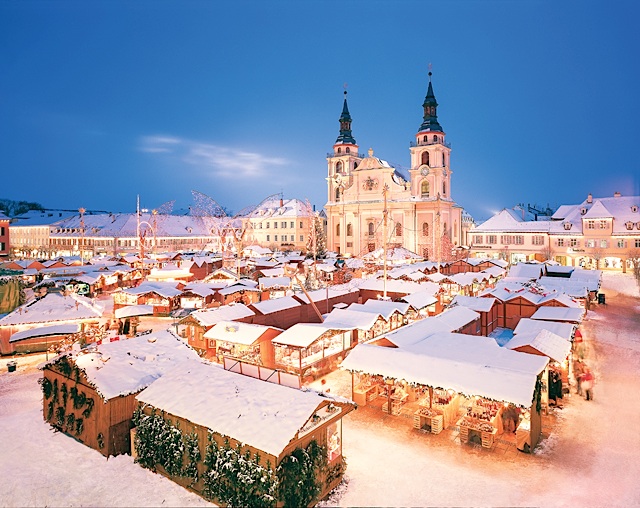 In Stuttgart, two hours distant, life is comfortable, relaxed, serene. The moment you exit the train station, you’ll discover why: from its tower rises not a city crest nor German flag, rather, the emblem of Mercedes Benz. The luxe automaker’s HQ is here (and Porsche’s too).

Another reason: the acres-wide Palace Gardens anchoring the Old Town, where locals promenade, enjoy picnics, and cool off near the pond and fountains from dawn till well past dusk. It’s the city’s living room, bound by the former palace on one edge, the forward Kunst Museum on another, and cafes with beer gardens sprinkled in between.

The Kunst—a showplace of uber-modern art, highlighted by works of homeboy Otto Dix, sports a glassy rooftop restaurant called Cube, from which to view the city. Gaze past the Opera House—home also to the world-famed Stuttgart Ballet—to another cache of artworks, the Staatsgalerie. You’ll spot it—and then get out your camera—by its green-and-magenta-striped façade, a scandal when it debuted in 1985 and now a beloved city icon. An exhibit called Graphic Boom spotlights works by Warhol and Rauschenberg, Lichtenstein and Robert Indiana. (Another wing celebrates the avant of earlier times: Munch, Matisse, Renoir, Gauguin.)

Reaching farther back, the Landesmuseum unveils the region’s history with intriguing social insights, from Stone Age through Celts and Romans, the glorious Middle Ages and disastrous Thirty Years War, to the glorious Age of Enlightenment, helped along by local poet Schiller.

Dine in the shadows of his statue at Alte Kanzlei, featuring local specialties maultaschen (like ravioli) and spaetzle rich with cheese. And local beer, of course.

More food finds at Feinkost Bohn, an upscale food market, and the sprawling Markthalle with over 40 stalls—Iranian caviar to Iberian ham and Hungarian paprika—and on the mezzanine, clever boutiques for home- and self-adornment. Shoppers stroll Konigstrasse to eye everything from H&M to Hugo Boss in his hometown, or visit Brenningers, the Harrods of the city.

In Nurnberg, also two hours’ distant, “We don’t show off. We’re down to earth. We enjoy life, and the city’s always busy,” declared a young professional who could live anywhere and chose this city for his home. He relishes its food scene, so let’s start there, at year-old Einzimmer Kuche Bar, celebrating regional, seasonal fare of Michelin quality in a casual setting. We lunched on a summery cold melon/cassis soup, then duck breast aside mashed celeriac adorned with blueberries and wild mushrooms. For dessert, we crossed the street to Neef, an elite patisserie of 45 years producing edible artworks such as fruit tarts topped by whatever’s at the height of the season—today, plums. Another time, rhubarb, cherries, apricots, cranberries. But Neef’s claim to fame is gingerbread: the famous Nurnberg lebkuchen, shaped like an outsized cookie, fragrant with nuts, orange, and hosts of spices.

Classics like this are a good fit for the city, whose Old Town is straight out of a Visit Germany brochure. Stroll along pedestrian-only Konigstrasse as it scrolls past market stalls with red-and-white striped awnings, past half-timbered houses, up, up toward the castle (open to visit) with views capturing the town below, surrounded by the only complete wall in all Germany.

Look for the spires of its three famed churches: St. Sebald of 1220, where a golden casket bears relics of the saint and stained-glass windows gleam. Then St. Lorenz, erected as a lookalike rival (one is an inch or two taller, gaining bragging rights) and glittering rose window. Frauenkirche, on Market Square, was built by Emperor Charles IV (he’s sitting in his best gold robe beneath the clock). Catch the glockenspiel performance every noon as his courtiers pay homage.

But artist Albrecht Durer had a bigger fan club. The town’s most famous son—well-to-do thanks to his engravings (the famous praying hands, the rabbit), which earned him this 600-year-old half-timbered house for his studio. Repros of his paintings are on show, but to see the real deal, visit the German National History Museum that captures 3,000 years of the country’s heritage, from Stone Age to monks’ cloisters to its bold-name painters—Durer, Holbein, Cranach. Another wing showcases homey crafts over the centuries, from painted armoires to hobby horses. Approach the building along an avenue punctuated by Pillars of Human Rights. (Nurnberg, after all, was the seat of Hitler at his most maniacal, and the postwar criminal trials.) Neighboring Neues Museum boasts a collection of international design since 1945—sleek sewing machines to toasters, plus exuberant contempo works.

Speaking of homey arts, it’s high time to taste the city’s famous bratwurst. At Bratwurstglucklein Sturn, pick the number of the finger-sized sausages you crave, accompanied by sauerkraut or potato salad. And beer, of course. At Altstadt Hof, enjoy them in the courtyard, along with spaetzle.

Another food icon: the soft, heart-shaped pretzels everybody snacks on. They’re best at Brezer Kolb, where its enthusiastic owner, Peter Kolb, oversees production of 30,000 to 40,000. Per. Day. He’s also got the world’s only pretzel drive-through. Choose your filling, ranging from salmon or sausage to cheese to just plain butter, the most popular.

For a culinary finale, head to Wurzhaus for dining deluxe in a casual-chic setting. Choices include a primo cold pea soup; quail, deconstructed and reconstructed with tiny egg, confit, breast meat, foie and roast cauliflower; then char, moist and pink amid bamboo. Bravissimo!

Want some, too? Check out www.germany.travel.