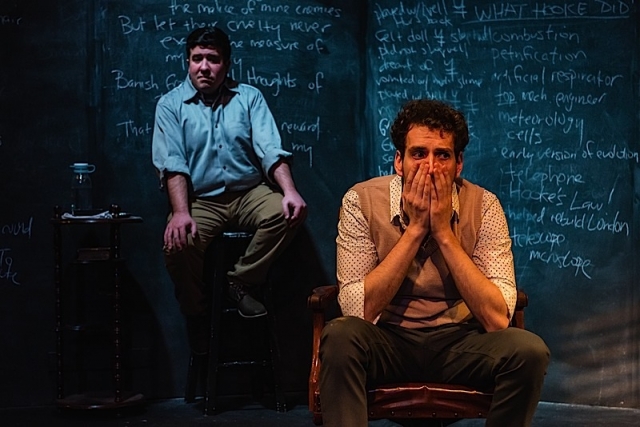 Don’t expect an historically textured play about 17th century scientific genius Isaac Newton when you see Theatre Pro Rata’s production of Isaac’s Eye at Gremlin Theatre. Instead, you’ll encounter a fascinating play written with contemporary language, rhythms and dress (Samantha Kuhn Staneart, designer) that does a “what if” on the audience.

Playwright Lucas Hnath conveys right from the start through a narrator (a sparkling Michael Quadrozzi) that much of the situation at hand is untrue and a flight of artistic license. Some could legitimately call this approach into question, indulging in the spirit of “fake news”, but Hnath is up front about it. The narrator writes the true and accurate bits of information on a blackboard that spans the upstage area. The rest is left to the “ether” of our imagination (a term spoken within the play). 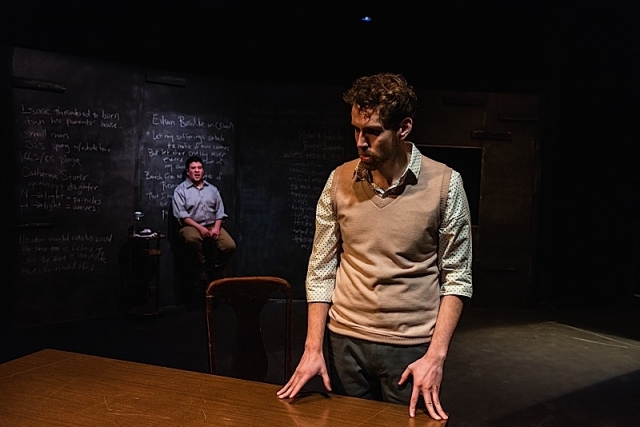 The crux of Isaac’s Eye pits young Isaac’s ambition against the borderline sociopathic competitiveness of the older scientist, Robert Hooke. At the start, Isaac, simply wants to gain acceptance to the Royal Society of London for Improving Natural Knowledge. As a sheltered youth from the country, he innocently assumes that Hooke, being older, would welcome his fresh original thinking. But Isaac doesn’t yet grasp that the Society is a swamp of oneupmanship, not unlike certain institutions in major cities today. The play’s contemporary sensibility can’t help but make us consider that.

However, when Isaac becomes aware that Hooke is not only a territorial creature, but a thief of his ideas, a psychological battle royal erupts. Director Carin Bratlie Wethern has piercingly matched the sparring intellectual rigor of Hnath’s script with turbulent emotion—sometimes understated, sometimes overt. You’ll likely be reminded of those you’ve known who live too much in their head. That said, where would we be without such minds? Can’t live with ’em. Can’t live without ’em. 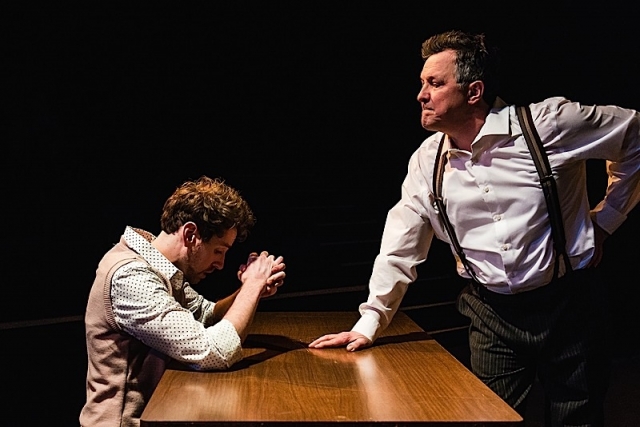 Paul LaNave sizzles as Isaac. He portrays the role as a young man obsessively driven by a way of thinking uniquely open to different conclusions beyond the norm. He disarms in a lowkey performance that acutely reveals a symbiotic relationship between genius and petulance. Isaac is not too far removed from the sociopathic himself, though the play seems to side with him moreso than Hooke.

Edwin Strout’s Hooke is simply marvelous. He gives us a man so consumed by envy that you may end of shaking your head while you laugh. This is among the accomplished Strout’s best performances. It’s a textbook example of how to not grow old gracefully. Moreover, Strout is oddly vulnerable as Hooke’s character arc impels him to face his illusions. 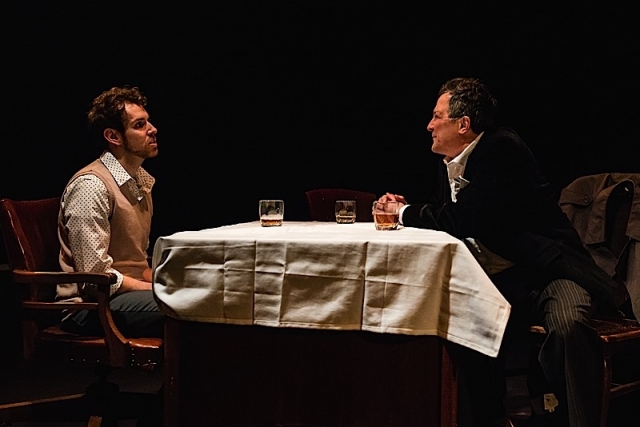 If you’re wondering what the title means, it has to do with a self-inflicted experiment Isaac performs on himself. It definitely adds to the production’s dramatic tension. But be warned: there are moments in Isaac’s Eye that could make you wince from watching the physical pain portrayed in particular scenes. 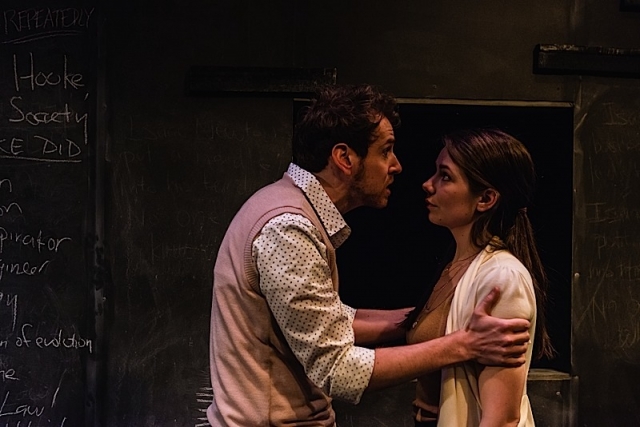 Pro Rata’s production is rounded out by a splendid turn from Stanzi Schalter as a fictional female figure named Catherine. She serves as a kind of invaluable muse who Isaac is foolishly unappreciative of. The character underscores his emotional immaturity and is clearly the wisest and most intuitive of the triangle.

All four actors are notably experienced in classical drama and this background glistens through the vibrantly heady dialogue and the complex feelings that dialogue emanates. A reminder that expertise with old classic plays pays contemporary dividends.