“For the Loyal”: A Jolting Look Into Sexual Abuse of Minors at Illusion Theater 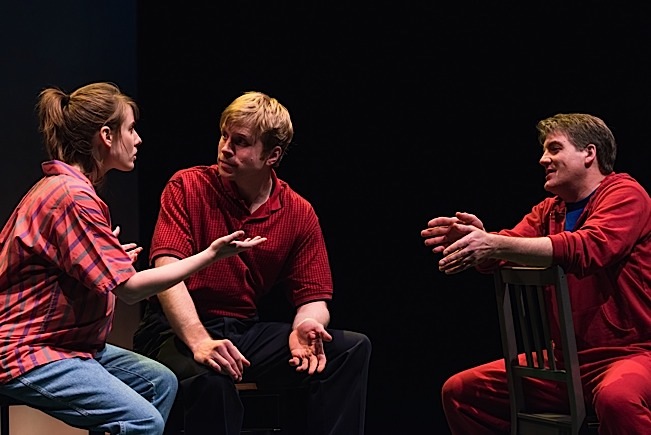 Lee Blessing’s riveting new play, For the Loyal, examines the institutionalized acceptance of child sexual abuse. It is now in a jolting world premiere at Illusion Theater. Inspired by the Jerry Sandusky scandal at Penn State University, the drama opens with Toby (Sam Bardwell), a young coach, telling his wife, Mia (Anna Sundberg), he saw his boss in a sexually charged situation with an underage male.

This information understandably catches her off guard, just as it did her husband. The rest of the play imagines various sorts of scenarios that a person -in this case, Mia- is up against should they actually have the guts to report such incidents. In the case of the institution where For the Loyal is set, Blessing creates stunning scenes wherein Mia is shown as a threat for speaking truth to power. The play reveals the vicious resistance she would come up against.

Michael Robins has directed the play with a sure grasp of institutional hypocrisy and a visceral sense of the psychological manipulations inherent within Blessing’s content. All performances compel. Sundberg gives a dynamic multi-faceted performance. Bardwell captures the way that perhaps most people feel when faced with making an ethical choice at risk of losing one’s livelihood and denying what you know is right. He’s not heroic, to say the least.

Mark Rosenwinkel is the terrifying face of the proverbial “good old boys” athletic department which protects its own no matter what. Garry Geiken is chilling as the molesting coach who finds all sorts of rationalizations for his crimes. The superb Michael Fell plays various youthful victims of the situation.