Landon Schoenefeld wasn’t even in the market for a new restaurant project. The North Loop pioneering chef and owner of Haute Dish was toiling away on the line recreating decadent comfort foods like the restaurant’s eponymous tater tot-adorned hot dish; however, when he was approached by the owner of a building in an up-and-coming neighborhood that had recently housed a wing and catfish joint, the challenge was irresistible. 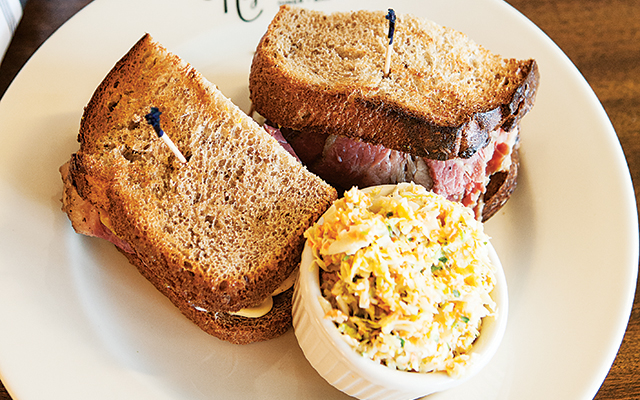 A tower of tender pastrami. Photo by Hubert Bonnet

A matter of months later, the building was gutted down to the studs and soon the address was reborn as Nighthawks. Located kitty-corner from Blackbird on Nicollet Avenue, this is the neighborhood of the moment. Nearby hotspots include the headquarters for The Aliveness Project, the always-buzzy Five Watt Coffee, Kyatchi, and a newly opened butcher shop.

The space is lined with windows, allowing for plenty of daylight to stream in. The room is split into two sections. The front room is lined with a bar, anointed with a thread of LED lights that glow with ever-changing colors. Along the wall are massive black booths, slick seating for groups. The back room has brick walls, a few adorned with Edward Hopper prints and local photography. At the back wall there is an eye-catching open kitchen, where you will find Schoenefeld standing guard, calling orders and overseeing the new venture. (Eventually, the barstool perch will become Birdie, a pop-up that will sell tickets for a tasting menu. At press time, Birdie had yet to launch.)

Outside, there are plenty of sidewalk seats. When the sun goes down, a streetside view is not unlike the Hopper painting from which the restaurant drew naming inspiration. 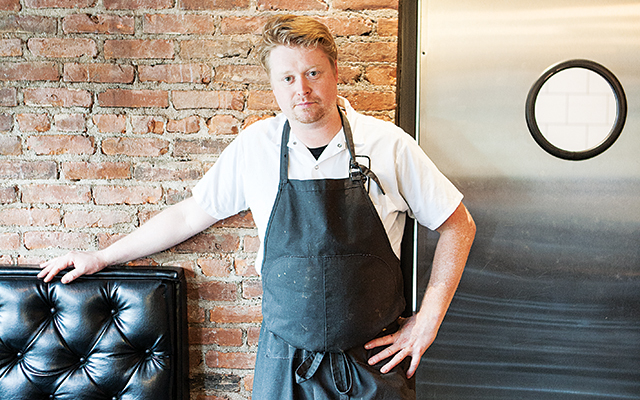 Landon Schoenefeld grew up in South Dakota. Although he’d worked in the industry, Schoenefeld didn’t consider cooking professionally until he landed in Minneapolis and decided to attend the Arts Institutes International culinary program. It wasn’t long after his graduation that the young chef began to get noticed. He worked the line for bold name local chefs and it wasn’t long before he was plotting the opening of his own restaurant.

Where Schoenefeld cooks, accolades follow. He has been recognized by Food & Wine magazine, racked up the local review stars, and dominated several cooking competitions. His uncanny ability to create a better comfort food is unmatched, which is why running a straightforward diner makes perfect sense. The dishes inside Nighthawks are not re-imagined classics. These are the classics done just as well as they have ever been.

Let us consider the humble pancake. The simple mix of flour, milk, eggs, and leavening is usually just a maple syrup delivery vehicle. Not here. These fluffy flappers are impossibly light. The crusty exterior gives way to tangy dough pocked with crannies that collect the subtly smoky, sweet syrup. Diners can order them naked or dressed up with a variety of mix-ins, including kimchi and bacon. Yes, you might not have been begging for a kimchi-layered buttermilk pancake, but now you can have one. Go with me on this, the twangy fermented condiment mixed with the buttermilk dough is actually delicious. After initially crinkling my nose at the idea, I inhaled them and was forced to apologize to my empty fork. 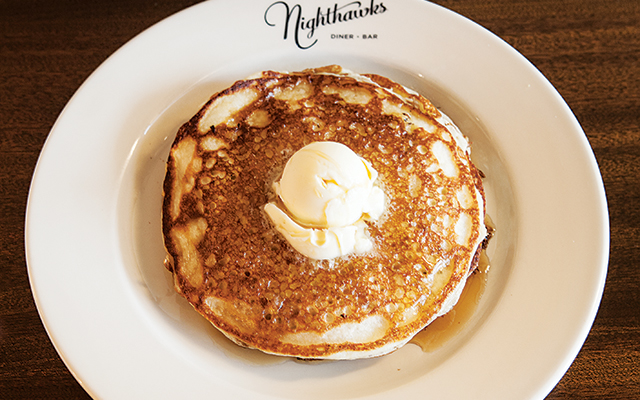 Pancakes: fluffy, golden and exactly what you want with your syrup. Photo by Hubert Bonnet

The dinner menu is dotted with winners like the massive footlong hotdogs, the towering pastrami sandwich, as well as another American cheese-topped hamburger ready to enter the race for best in the Twin Cities.

The pastrami is without question the most tender and succulent to be found in the metro area. Piled skyward atop soft, rye bread with a swipe of Kewpie mayonnaise and Uncle Pete’s mustard, it is a fat beauty to behold. The Minneapolis portion will keep you filled for hours after meal time and the New York portion is best ordered when swathed in elastic-waist pants.

The hotdogs are sourced locally from Kramarczuk’s and come topped with everything from chili to pickled herring. The Nighthawks is buried beneath giardinara, spicy cheese, dill spiked mayo, and shreds of fried potato. The meaty unctuousness of the dog mingled with all the zippy adornments is a joy to devour: salty, spicy, creamy, snappy, and crunchy packed into a delectably squishy bun.

There are all kinds of other dishes to activate a serious attack of the munchies including Frito pie, a proper chopped liver on toast, chili fries, and fried chicken wings (including some that are nostalgically evocative of the variety the restaurant’s prior tenant served). 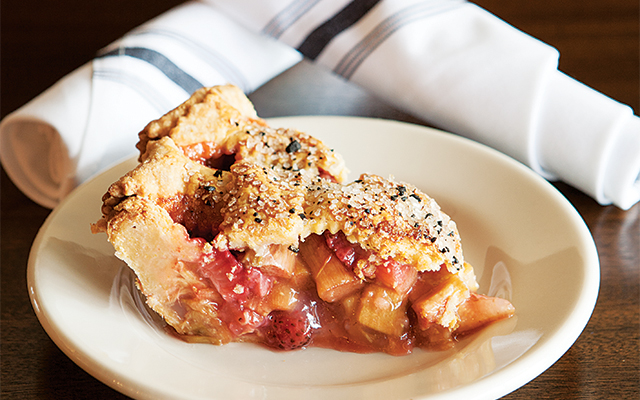 A slice of pie so good you’ll want to order a couple more for your friends. Photo by Hubert Bonnet

Now, if you’re a vegetarian and balking at all this meat as a condiment business, don’t worry. The carrot “hot dog” is a glory in cruelty-free eating. The fried cauliflower tossed in hot sauce will have even the staunchest carnivore swearing off Buffalo hot wings. Schoenefeld has always had the utmost respect for his veggie dishes and those found at Nighthawks are no exception.

The bar serves beer, wine, and a “cocktail” list created with help from Robb Jones (of Spoon and Stable). The craft beers on tap are utilized to make such sippers as The Hopper, a sweet mix of Sweet Child of Vine, grapefruit, petal, and thorn augmented with a few dashes of Angosturra bitters. Annie’s Kick is a mix of IPA, Cocchi Americano, and sweetened with a bit of ginger syrup. For those who eschew the booze there are craft sodas like Boylan’s Birch Brew (better than root beer), teas, really, really good coffee, and a collection of tasty “frostbites.”

It might be difficult to do, but be certain to save room for dessert. The pie slices have been gaining a cult-like following of rabid fans who can’t stop Instagramming the food beauties. The entire dessert list is packed with nostalgia, replete with a twisty soft-serve cone, malts, popsicles and more.