I was born in St. Paul, near the Capitol. My parents took my brother and me out to the country to raise us, but I am pretty sure I’ve been magnetically attracted to St. Paul my whole life. I can leave it, and I’ll come back to it.

While a wee lass in the country, I’d idealized a magical place called “Grand Avenue” where the buildings were old, the streetlights were streetlamps, and there was always ivy growing on brick walls. Its street blocks were probably scented like the Aspen Mulling spices that the Victorian Homes magazine always smelled like in the 1980s. 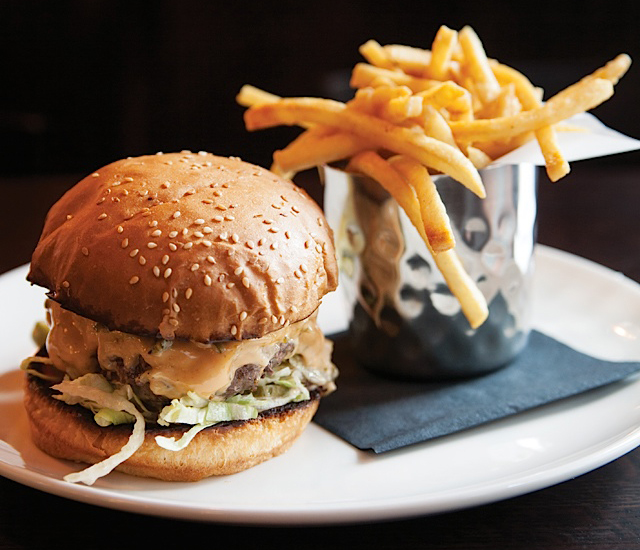 The Fitz burger: probably just as messy and tasty as Scott, himself.

But, what I had yet to learn about was Cathedral Hill. Grand Avenue is grand, but Cathedral Hill has even more of what I wanted. Churches and business buildings and restaurants and shops all mixed in with houses that make me swoon. There are books published about these locations. There is a bus tour that shows us where the gangsters lived. There’s an air of romance to the whole neighborhood. And, there was a man who called this area home named F. Scott Fitzgerald, author of The Great Gatsby. A man for whom the newest restaurant at Western and Selby is named: Fitzgerald’s. 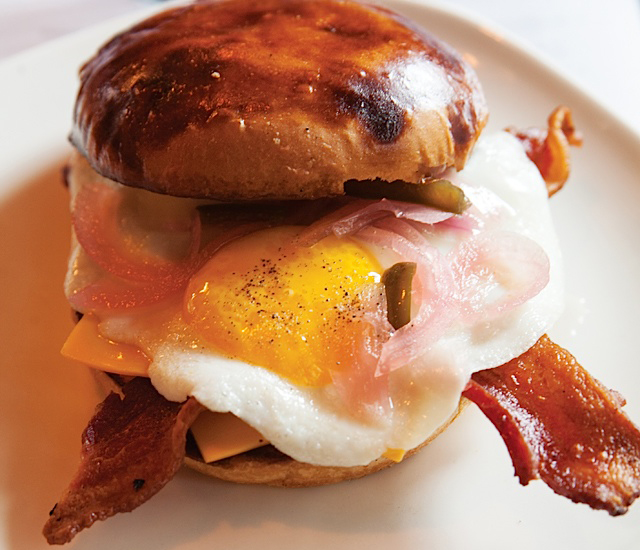 Everyone’s got a few versions of who they are, from more buttoned-up to playful to downright raucous. The idea behind this new bar and eatery is to present a restaurant that’s the more casual (yet still fully deserving of its place in the crown that is Cathedral Hill) version of something that’s become more of an ideal than a person. But lest we forget, F. Scott Fitzgerald was once Scott. This is where he might have caroused. It’s where he may have stayed long hours, eating good food and getting (or remaining) properly soused. It’s where I can imagine a man with a look on his face of someone who has been fed to great satisfaction. Okay, that was me. I’ve had that look. Twice. 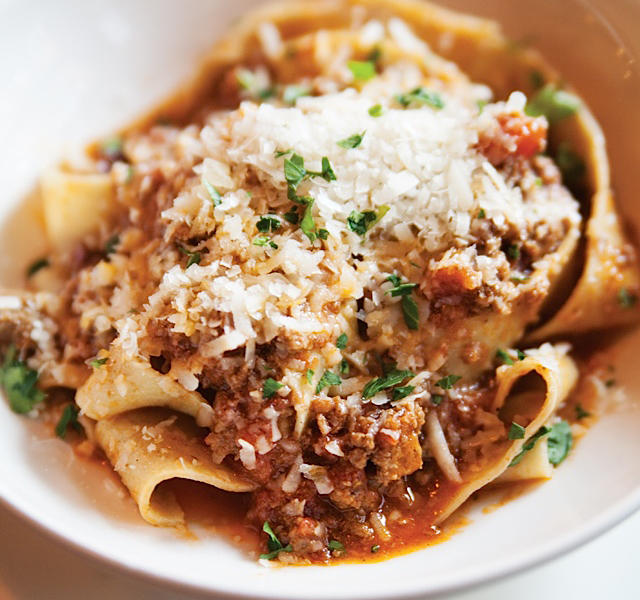 A bowl of comfort, the pappardelle with Italian sausage and beef ragu.

You may remember the space as being the Salt Cellar, where steaks and tableside-made salads happened for a while. Much like the man for whom this new destination is named, the restaurant on the corner has reinvented itself. The team behind it has been a prolific one in St. Paul in recent years with restaurants including Public Kitchen + Bar, Handsome Hog, Ox Cart Ale House, and Eagle Street Grille. This one pulled some tremendous talent from Ox Cart to bring it to fruition: chef Graham Messenger and general manager Joe Paton. And the whole space has had some work done, both structurally and cosmetically. The team listened to what the neighborhood was asking for, and doubled the bar to become one large rectangle, added a bunch of hightop tables, and made a more clearly defined auxiliary area for more space or private dining if the large barn door is utilized to separate it from the majority of the restaurant. The space looks smart; it makes sense. I give high marks to the improvements. 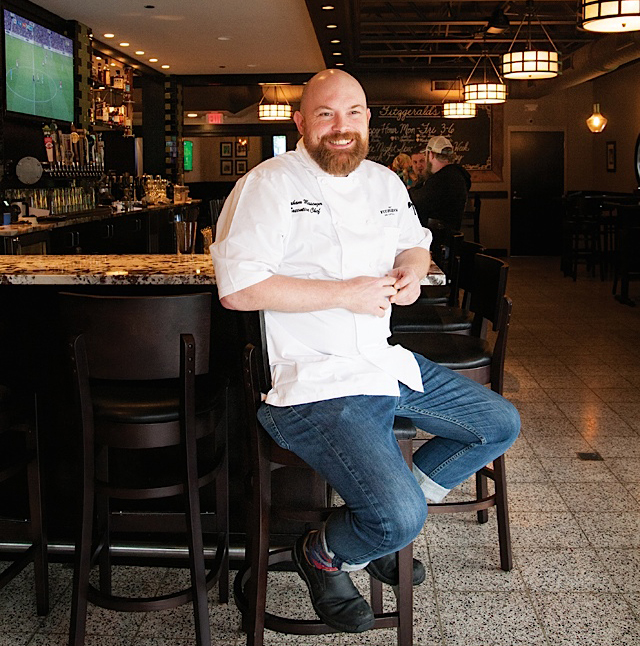 Chef Graham Messenger with a grin and a glimmer.

While the neighborhood was asking for casual, we also know that it’s a neighborhood that expects things done well. The neighboring restaurants have set the bar pretty high for what goes at Western and Selby and we’re the ones who benefit from those standards. So, while you might be wandering in for a late lunch while watching the game, know that you can order bar food, and it will be so good.

The lunch and dinner entrées span from pizza to sandwiches to burgers to chicken and steak and fish dishes, while the brunch looks inviting with favorites like hash, bennies, omelets, or even ribs. I was able to get a few bites of the fried egg sandwich from the brunch menu and know that I will be back to explore more. All of the baked goods are from St. Paul’s own Saint Agnes Baking Co. and I’m a sucker for the egg sandwich on a milk bun with bacon, American cheese, a sweet and briny pickled red onion, and a harissa mayo that has more sweet than heat. 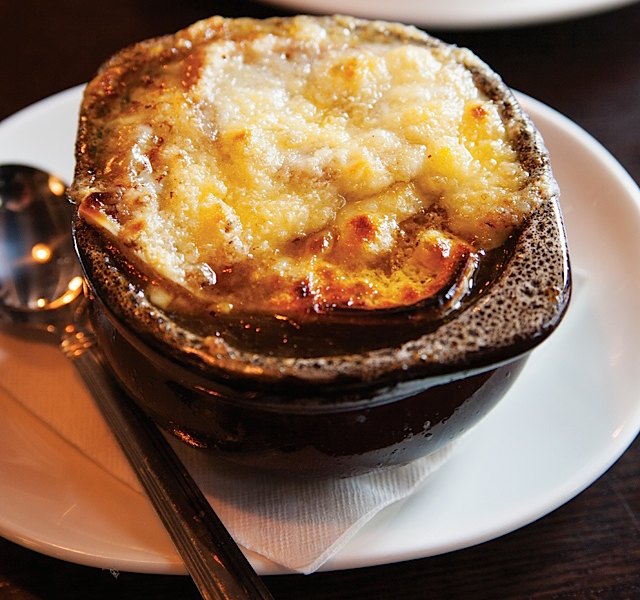 The perfectly executed french onion soup with crouton and gruyere.

I can attest to eating some sumptuous dishes, myself. For starters, the jalapeño and cheddar croquettes are a reimagined version of poppers. These fried fingerlings of cheese and heat give the same mouth-feel as a conventional popper, with a much more satisfying center of cheese with the ambient flavor of jalapeño. Smear them through the swoosh of béchamel to make each bite more than you knew you wanted from a bar app.

If you’re more in the mood for soup or salad for your mealtime warmup, I recommend the french onion soup and wedge salad. The french onion soup is the standard and satisfying savory brown broth in a crock that is chock full of onions and croutons and oozy melted cheese. I took a picture of it to warm me up when I’ll need it in the upcoming winter months. And the wedge salad with red onion and sunflower seeds has the most inoffensive blue cheese dressing I’ve ever encountered. Not being a fan of blue cheese dressing, I was pleasantly surprised that the creamy base was absolutely delicious first, then punctuated by the crumbles of blue cheese second. I think this is a winner for those who both love and mildly dislike the funky stuff. 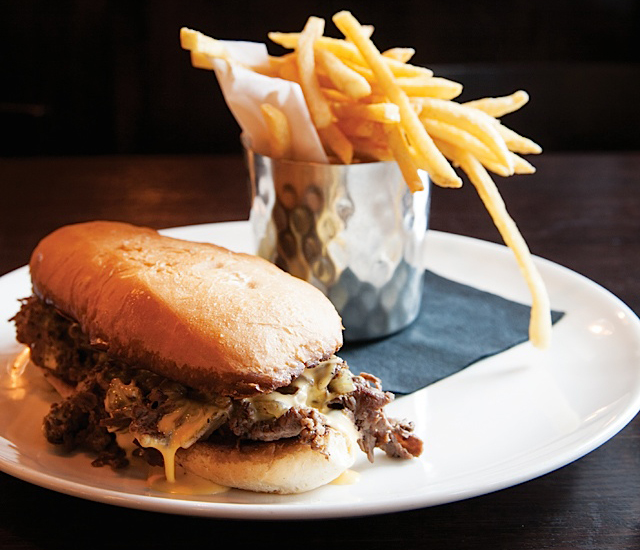 You’ve got a few options for how to approach your entrées. There are sandwiches and burgers, pizzas, and full-on entrées for your consideration. And I’ll be honest, of what I’ve tasted, you’ll find me hanging out in the sandwiches and burgers portion of the menu because that’s where I’m happiest. Oh, the pizza with Spanish chorizo and caramelized onion was delicious and the pappardelle with Italian sausage and beef ragu is very pleasing (the ragu could use a touch more garlic, methinks), but the stars of my constellation are the Philly cheesesteak and the Fitz burger. The cheesesteak is a salty, unctuous sandwich made with sliced ribeye and house-made Cheez Whiz, making it a glorious mess of a meal. And the Fitz burger has not only a well-salted, flavorful burger patty, but enough Russian dressing, cheese, and pickles-per-bite to make anyone say, Big Mac who? 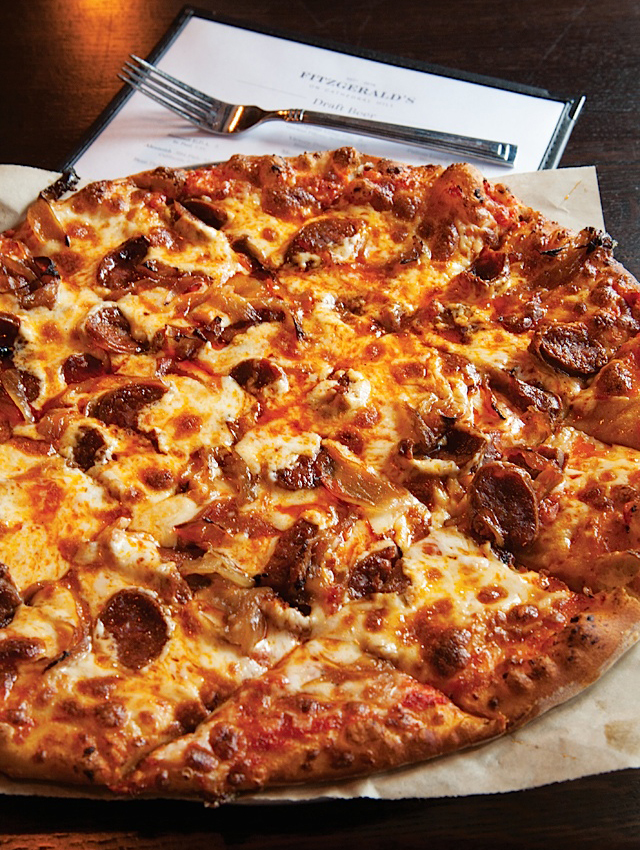 The pizza with sweet caramelized onions and spicy chorizo.

Finally, for dessert, you may not have many options, but you have good ones. There’s Izzy’s ice cream and then there are a few selections that Chef Graham is quick to point out were concepted by Cheyenne Broughton of one of the other restaurants in the family, Handsome Hog. They needed to be good and they needed to be doable in the fast-quality environment and they pulled that off with aplomb. 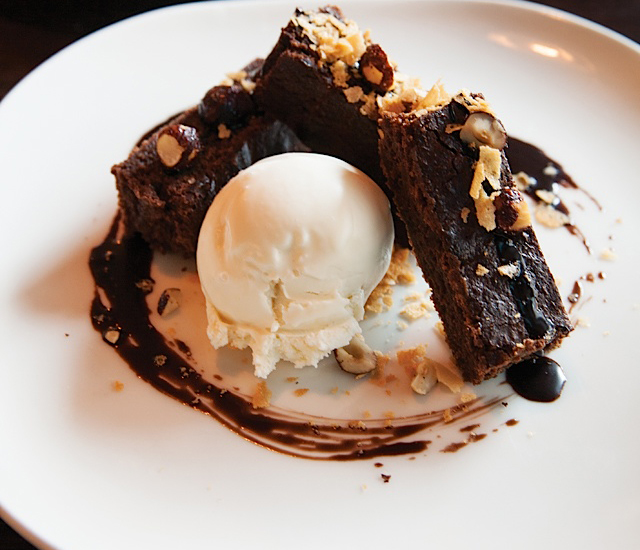 The chocolate brownie comes in slabs that defy reason in that they’re so soft and gooey but still retain their structure. With a dark cocoa sauce, toasted nuts, some crisps (that are actually called feuilletine, but let’s not get too fancy), the dessert is a hit for those who love the cacao. I’m the one who’ll be hoarding the cranberry custard all for myself. I’m a goon for the puddings and flans and crème brûlée and pots de creme, but this is actually a posset and I could not be happier to add that word to my lexicon. And daily diet. A fine, smooth pudding with a hint of cranberry is the light-pink base that carries a bit of compote and brown salty-sweet crumbles. (Not to be confused: Graham’s the chef; the flavorful topping is brown-butter streusel. You’re welcome.) 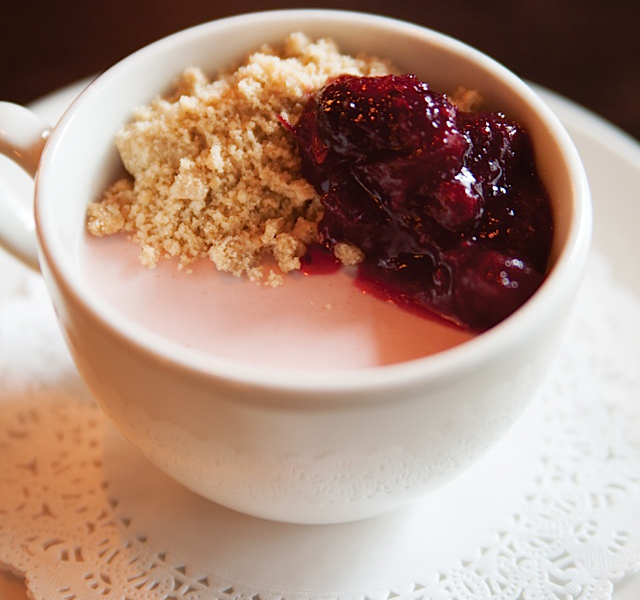 If you’re stopping in for a drink around the massive rectangular bar, be sure to check out one of the many beers on tap. The cocktails were concocted and give both playful ingredients and flavors as well as location-centric names. And, I’m happy to report, that they were more than happy to provide on-the-spot non-alcoholic drinks for me as a non-drinker when I said I’d like “something tasty with ginger.” Next time, I’ll probably try “something delicious with cherry” or something equally ambiguous because I know they’ll give me something good.

When I asked Chef Graham what was different between what he had been making at Ox Cart Ale House and Fitzgerald’s, he said that in addition to the local ingredients being similar in importance, so is the speed of execution. Ox Cart is positioned near the baseball stadium in Lowertown and required fast foods including sausages. The concept up the hill at Fitzgerald’s maintains the fast foods that rely heavily on the prep but are able to be completed and plated quickly. So, even though I might joke about moving in and taking over a table or booth for an afternoon, know that you can get in and out easily if you need to. It’s a neighborhood joint that wants to make the people happy, whether you’re lingering like Fitz or on your way elsewhere, but want a good meal in your belly in the meanwhile. 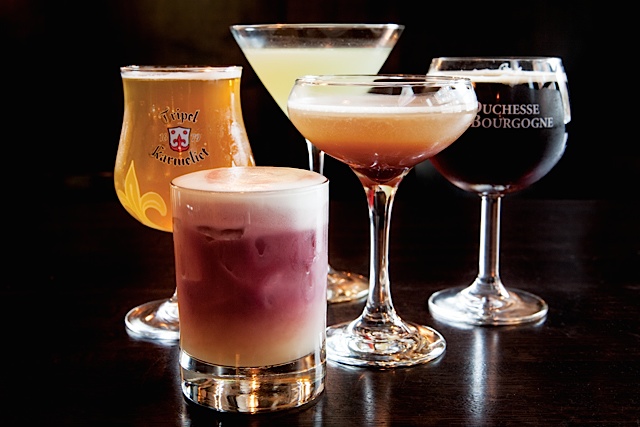 Fitzgerald’s is already proving itself to be a popular addition to the neighborhood with the crowds I’ve seen packed in there so far. I wish the team well and am happy to welcome it to the grand collection of restaurants at that intersection. Leave time for parking, save room for the custard, and I’ll see you on the Hill.