We were promised fried chicken. Up until now, the fried chicken selection of the Twin Cities was sparse. There were some broaster birds, the addictive breast strips at The Rabbit Hole, several good wings, but no down-home, crispy-shelled, juicy, meaty full-on fried chickens. 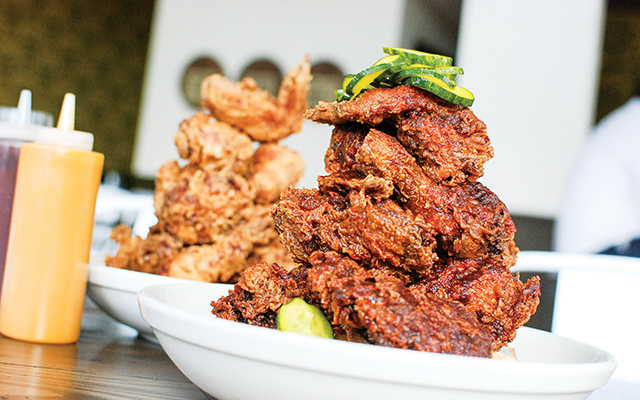 Southern fried chicken that lives up to our anticipation. As cozy and comforting as the skirt of Grandma’s apron. Photo by Joy Summers

When the crew behind Corner Table picked up and moved their restaurant down the block they began to ruminate about plans for the restaurant space they were leaving behind. I remember Nick Rancone stroking his full-blond beard like a Bond villain when he declared, “Good fried chicken — the best in town.” They were boastful words. Chef Thomas Boemer’s eyes would reflexively close as he rhapsodized, “Soaked in buttermilk and coated in flour. It’s so simple and so good.” My stomach grumbled in protest. Practically a year after these conversations — which in gastronomical time felt like a lifetime — we waited.

With every meal eaten at Corner Table these two would tease me with single dropped words. “Biscuits,” Rancone whispered as he poured my wine.

Lording over the grill Boemer would chuckle, “Collards.”

White Lily flour was sourced (which turned out to be no small feat). Recipes were tested. A burger joined the crowd. A cook with proper Southern pedigree to match Boemer’s was hired. The space on Nicollet was utterly transformed. The dropped office-style ceiling was torn out to reveal pressed tin and an entire bank of high windows were uncovered. Snappy ’70s rec-room evocative wallpaper went up. Long wooden booths were installed. Fryers arrived and finally, finally the first few batches of fried chicken arrived. Eaters lined up the second the doors opened.

I first wrote of Corner Table’s ownership change in these pages [lavendermagazi.wpengine.com/our-scene/slice-corner-table]. Nick and Chenny Rancone bought the neighborhood bistro from Scott Pampuch. Chef Thomas Boemer at first ran the kitchen, but then also bought in as an owner. They won the hearts and stomachs of skeptics as well as long-time sustainable food fans by continuing to cultivate relationships with local farmers, while simultaneously serving plates of humbly elegant food. 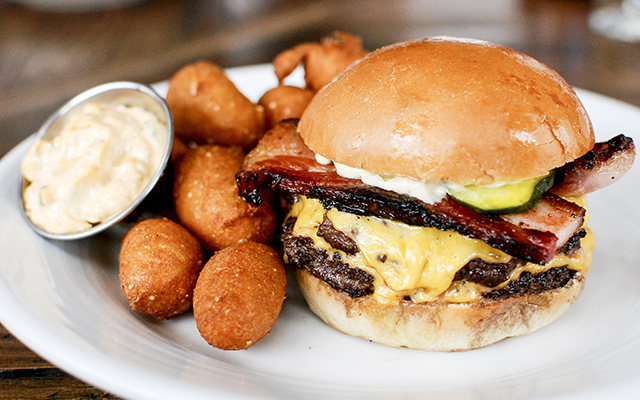 Not to be overlooked: the burger with bacon and Revival sauce. Photo by Joy Summers

They moved the business down the street to the more spacious digs that once housed La Chaya Bistro on 46th and Nicollet Ave. The space added several more seats, a more refined room, and a lovely patio space with a giant, rock sculpture.

Not only did Boemer’s food blossom and grow, Rancone’s wine list developed into one of the most intriguing in town. And yet…there was the trouble of the fried chicken. There was a brief (and wildly popular) brunch service that held a few hints of what was planned for Revival. During Open Streets last summer there were a few more bites of promise. But, still we had to wait — that is, until early March.

My first plate of fried chicken arrived in a tower, cascades of hot juices erupted from the bird and glistened at the crispy battered edges. The Tennessee Hot fried chicken positively glowed from within with layers of bright spices. The Southern fried chicken wasn’t as red, but golden, and as cozy and comforting as the skirt of Grandma’s apron.

The first bite of the Southern fried shattered as my teeth tore into the tender, moist flesh. The crust is so perfectly, exquisitely simple: flaky in texture, seasoned to the edge of salty and then pulled back and down into the chickeniest of chicken meat. The Tennessee Hot was heavily spiced with a tiny touch of sweetness to balance the addictive inferno. The skin retained the crusty crunch as it spread a summer sun heat from the inside out.

The fried chicken is just one of the many items listed on the menu and the other offerings deserve attention, too. The greens are possibly the best I’ve had in years, deep, rich with a balanced earthiness and a pool of juices worth licking out of the bottom of the bowl. Thin threads of crispy fried pig ears are tossed amongst a bed of fresh greens which is entirely bright, light, and lovely. The wedge salad finally explains how a chunk of iceberg lettuce could become a salad classic: tangy, black pepper-seasoned buttermilk dressing is studded with pork-redolent bacon and creamy-crumbly blue cheese, and more satisfying than a crunchy bit of moisture-rich greens has any right to be. Johnny cakes are everything glorious about brunch: savory and sweet, they’re corny pancakes that are stuffed with cheese and graced with cowpeas, syrup, and a poached egg that spills forth in all its yolky glory. There are pork rinds that taste like Funyons. I mean…come ON! 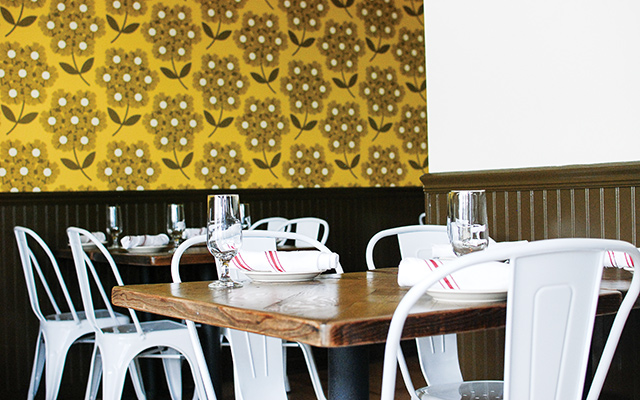 And then there is the burger. Oh, good glory — were we crying out for another great burger? Where the chicken fills a vacant cavern of craving, the burger has to join an impressive list of great beefy bites in the Twin Cities. Yet, those other classics are going to need to move over: Parlour be forewarned, it’s gunning for your seat as top patty in town. Grass-fed beef, ground in-house, is more succulent than any other sustainably raised burger I’ve tasted. Pure, unadulterated, dripping down your chin hamburger glory exists in that first bite. A perfectly squishy bun collapses into the fat hunks of bacon, pulls against the threads of melted cheese draped atop of the meat, and mingles with a careful swab of mayonnaise. House-made pickles are just sweet, tart, and salty enough to cut that generous fat. Dabbing the whole business with a bit of the sweet potato-based Revival sauce that arrived with my entrée didn’t hurt anybody’s feelings, either. Again, the sauce dances on that edge of several flavors, playing in the hinterlands of great, undiscovered flavors that arrive shockingly familiar upon the tongue.

The beer and wine list are uniquely geared for pairing with this food; selections are light and fun to taste your way through.

But…first you must start with the fried chicken. We were promised great fried chicken and after an excruciating wait, it has arrived.