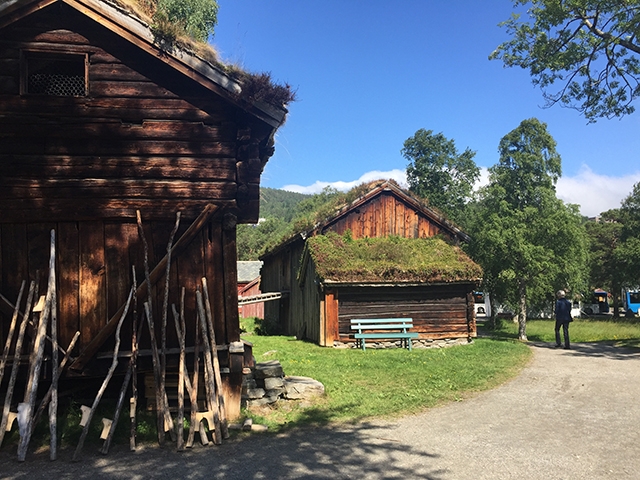 The Norwegian town of Molde features an open-air museum of historic buildings. Photo by Martha Waldemar

Okay, I confess: I’m a hardcore Viking fan. No, not the kind that heads to the stadium in a purple jersey—rather, the kind who looks for Viking River Cruise announcements in her inbox and grabs her passport. I’ve enjoyed sailings on the Rhine, the Danube, the Dnieper and more.

But what about a Viking ocean cruise, skimming along far vaster shorelines in a larger, 900-passenger ship? Despite visions of long lines at buffet stations, lengthy waits to sort out shore excursions, and scant likelihood of forming shipboard friendships, the itinerary—Norway, then Scottish Isles and London—was too sweet to pass up.

I was delighted to be proven wring—mea big-time culpa—on all of those concerns. Rather than just a number, I was treated like the diva I was born to be. It was “Good morning, Miss Carla,” from the cabin steward as I sashayed off to breakfast (having sipped a cappuccino from the stateroom machine and gazed sunward from its balcony) and “The same as yesterday?” when the wine steward poured another complimentary glass at lunch. Then again at dinner. And yes, passengers I’d met on the sun deck were eager to share a dinner table.

Thick towels awaited at the heated swimming pool. High tea arrived in the Wintergarden. And the spa welcomed me with sauna, plunge pool and even a snow room (really!). Then I realized that all passengers onboard received the royal treatment. 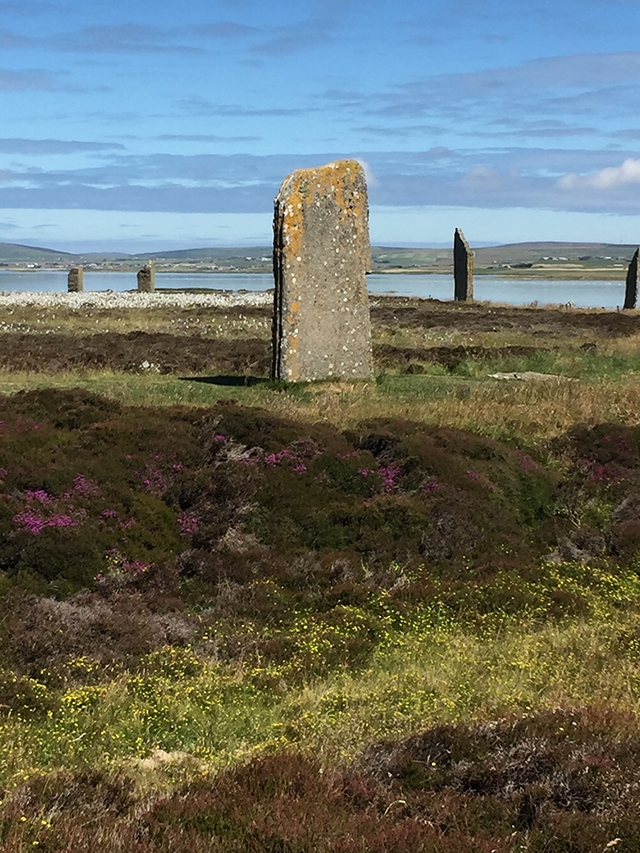 Orkney Island features a circular array of 27 standing stones, their origins still unknown to this day. Photo by Martha Waldemar

I chose the voyage called “Into the Midnight Sun” to celebrate both our state’s Viking heritage and the near-24-hour daylight Norway celebrates in summer. (One error: Sunlight doesn’t always deliver warmth. Pack woolies.)

Walking inland, we circled the town’s pond (gulls, gazebo) with its four art museums hemming the shoreline, host to paintings by Norway’s own Impressionists plus local icon Edvard Munch, with his angst-fueled portraits (“Life, love, anxiety, death,” he broadcast as his focus). The neighboring contempo showcase included a cement mixer spewing poppies. Later, from my private balcony, I clicked photos as our ship silently slunk along the fjord to the open sea. It’s after midnight, but kayakers paddle by. 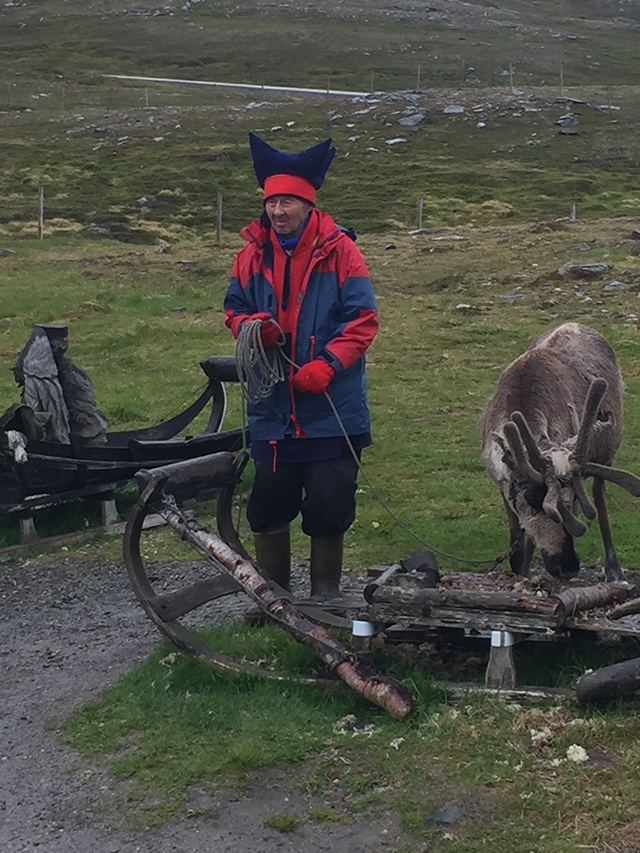 Traveling beyond the Arctic Circle will gift you with the sight of reindeer herds and windswept boulders. Photo by Martha Waldemar

It’s 5 a.m. now, and we’re slipping into Geiranger, perhaps Norway’s most breathtaking fjord. Its 27-mile path flows between steep, rocky walls pleated with the silver threads of waterfalls and tufts of snow (in July!). Camera overload!

We clamber aboard buses to maneuver the corkscrew turns up the mountainside to Eagles’ Nest, past goats munching on patches of green. Geiranger’s Fjord Museum recaps the area’s wild history, including a bone-shaking simulation of an avalanche. “Norwegian sunburn!” we boast to a bartender upon our return, who decides it’s the name of a new cocktail.

Next, we anchor in Molde amid an archipelago of tiny islands. Its modern cathedral—erected after Nazis virtually destroyed the town—is a mirage of white brick and modern glass in jewel colors. The town museum, too, is another modern show-stopper of blond wood. Inside, the story of fishing, hunting and lumbering is explored. Close by stretches an open-air museum of historic buildings gathered on the site—grass-roofed cottages, schoolhouse, church, bakery—where peppy costumed children sang and danced for visitors.

After a day at sea—one of three—we glide into Tromso with its stunning snow-white Arctic Cathedral rising from the waterfront. In the town center rises the homespun Tromso Cathedral, a butter-yellow building of 1861 and Norway’s only wooden cathedral. Pace a bit further and you’ll reach the Polar Museum, documenting the challenging life of Arctic whalers and seal hunters as a husky dog provides a soundtrack. Norway’s heroic explorer, Roald Amundson, discovered the illusive Norwest Passage; his challenging feats (and follies) play out here, too. Nearby, the Norse Kunst Museum provides a peek at artists’ portrayal of the Arctic Circle and beyond, including an enigmatic sculpture of a pocket knife upon frogs’ legs. Sami Native embroidery details the scenario of herding reindeer. 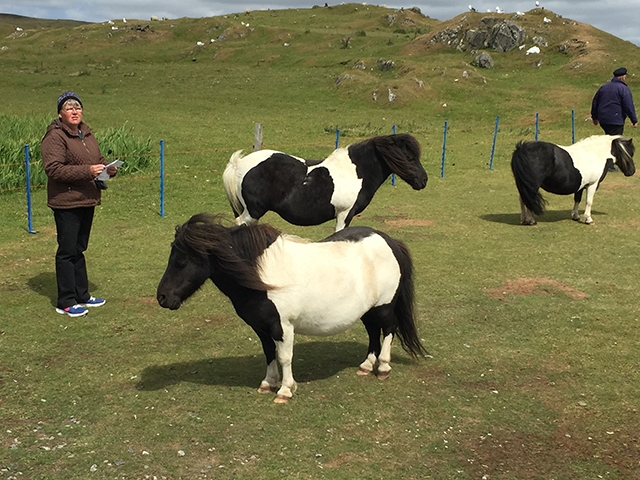 Visiting Carol’s Ponies in Scotland will introduce you to a herd of the famous miniature horses of Shetland. Photo by Martha Waldemar

The next day we pass north beyond the Arctic Circle. Now we’re far above the tree line, surrounded solely by windswept boulders and populated by reindeer herds. Our icy destination is the North Cape, a pinnacle of barren tundra. Chillier than a January day in Minnesota, we earn bragging rights but huddle in its warm museum.

Turning south now, we meander through the Lofoten Islands to anchor at Leknes, a fishing village where cod is God. Skiffs line the shorefront and tent-shaped drying racks are lawn art. The landscape segues from gray to green and houses wear the hues of Easter eggs. Zany sheep scatter mindlessly on our approach to Lekness’ white-sand (but ice-cold) beach along the “Lofoten Riviera”, strewn with boulders big as Buicks.

Next, Scotland beckons. We anchor at one of the Shetland Islands, where homes are built of slate-gray stone. Wandering the main street, we browse shops that have transformed yarn into high art, as in Norway, but this time in the traditional Fair Isle pattern. We gossip with vendors as we head toward a museum celebrating Shetland’s wild history, starting with arrival of the Picts in 297 A.D. Christianity comes 400 years later, along with life in the longhouse. Fort Charlotte, a defense from the 1700s, continues the tale.

A tour takes us through heather-clad hills to a stop at Carol’s Ponies. Carol, a third-generation owner, introduces her herd of Shetland’s famous miniature horses, strong enough to pull twice their own weight. Past salmon cages and ropes where mussels cling, we return to our ship for dinner—tonight in its Italian restaurant. Tomorrow, we reserve the Chef’s Table to experience its tasting menu. But it’s hard to beat the main Restaurant with its nightly-changing menu—foie gras, followed by lobster. Or Angus steak. Or salmon. Servers greet us by name and the wine starts flowing.

By dawn, we’ve arrived at Orkney Island for a jaw-dropping exploration of this outpost’s Stone Age. We make our way past grass-covered burial mounds to Skara Brae, an excavated prehistoric village. We pass the Ring of Brodgar—older than the pyramids—where 27 man-high standing stones form a giant circle, their origin still cloaked in mystery. Back in town, we gaze again with wonder at the majestic Romanesque power of St. Magnus Cathedral of 1137.

Tomorrow, a romp through elegant Edinburgh, keeping an eye out for Queen Elizabeth, who’s spending the night here at Holyrood Palace. No luck. But the consolation prize is pretty special: a lively marching band heading her direction, garbed in jaunty red jackets, kilts and mile-high bearskin hats, plying their drums and tubas.

London is the grand finale. We’ve signed on for a full-day optional tour of the city, starting with its iconic Tower, where we gasp at the crown jewels (including a diamond big as a lemon), the armor of Henry VIII and scary prison cells. We hit all the high points: Parliament, Big Ben, Westminster Abbey, Buckingham Palace, Trafalgar Square (blanketed with pigeons, just as promised) and a lunch of fish and chips in Covent Garden.

Couldn’t get better, right? Well, it does. As we pack for tomorrow’s flight home, from our balcony on the Thames we watch fireworks explode in a brilliant finale. “Ladies and gentlemen,” says our Norwegian captain, “we hope you’ve enjoyed your cruise.” To do the same, visit www.vikingcruises.com/Oceans.