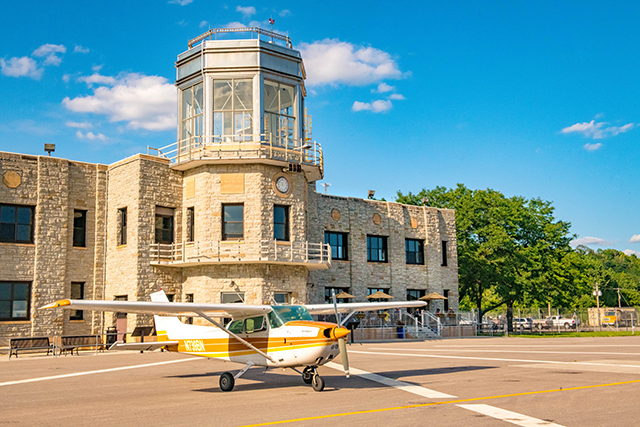 For a worldly staycation – or a great wedding reception or date night – look no further than Holman’s Table. This one-of-a-kind restaurant captures the essence of luxury travel between its multiple dining and event spaces, as well as the chance to dine on a tarmac. Holman’s Table originated from an opportunity to partner with the Metropolitan Airports Commission to open a restaurant in a newly renovated space in the Old Terminal at the historic St. Paul Downtown Airport.

Although the concept and location of Holman’s Table is utterly unique, restaurateur Troy Reding of Ally Restaurants and Rock Elm Tavern did not shy away from the possibility. After forming a connection with the Director of Reliever Airports with the Metropolitan Airports Commission, Joe Harris, the enthusiastic partnership led to the creation of a strong brand and concept. As a result, Holman’s Table opened just in time for the 2018 Super Bowl, drawing in hundreds of planes to Holman Field. Since Holman’s Table is located at a private airport, guests with access to private planes can fly directly to Holman Field. The timing facilitated local and national popularity, drawing in more people to visit the Twin Cities.

The namesake of Holman’s Table is Charles W. “Speed” Holman, a historical figure born in Minneapolis in 1898 who earned his nickname from pranks and motorcycle racing in his early life. After learning to fly planes at age twenty-two, he became a household name as a stunt artist, cross-country racer, and Midwestern airmail pioneer. He became so famous that his funeral was the largest in state history with one hundred thousand people in attendance between the funeral route and the cemetery. While there are several stories which inspired the naming of Holman’s Table, one of the most noteworthy is that Holman once flew over the St. Paul Downtown Airport with 1,433 loops in succession.

Separate from the Dining Room, there is a space with its own bar snack and drink menu called Cora’s Lounge. This luxurious lounge honors Cora Fuller, the first licensed female pilot from Minnesota. Guests of Holman’s Table can enjoy Happy Hour in Cora’s Lounge.

If guests are looking to host a private dining experience, whether that be for rehearsal dinners, company gatherings, or other celebrations, the Earhart Room is ready with customizable chef-crafted catering menus, cocktails, and exceptional service. Staff at Holman’s Table report that “Guests are always enamored with the space itself; they love how unique it is. The interior is stunning, and they are thrilled to bring guests to a hidden local gem. They are wowed by the selection of chef-crafted food and stellar service.”

Although the theme centers the history of plane travel, Holman’s Table prioritizes local businesses. They recently formed a partnership with Feller’s Ranch in Conger, MN to source top-notch wagyu beef for their burgers and steaks. In Minnesota and Wisconsin, Ellsworth cheese curds are a household name. You can find that comfort snack as an ingredient for the poutine on the menu ($15). Other local products used in their menu include Red Lake Nation wild rice, Tappers maple syrup, and Revol Greens produce. In the warmer months, staff visit the St. Paul Farmer’s Market to find inspiration and purchase ingredients for their specials.

Representatives from Holman’s Table report that the most ordered item on the menu is the mushroom toast ($15). Consisting of roasted wild mushrooms, walnut aioli, montamore cheese, herb ciabatta, and a red onion marmalade, most tables order this plate as a starter. Another intriguing item is the 300 Dollar Burger featuring gruyere, madeira truffle demi, foie gras butter, and wedge potatoes ($25).

Since its sister restaurants feature burgers, staff felt that the menu needed a burger that captured the essence of Holman’s Table. Chef Garret suggested, “Why not top it with foie gras and serve it with something other than fries?” The name comes from an old saying that pilots would spend $100 on a hamburger for lunch just for an excuse to fly their plane, and $200 was jokingly added to the name to account for inflation.

If you are not a pilot yet remain literally interested in flying to dinner, Holman’s Table has partnered with Minneapolis Helicopters for a dinner plus flight experience. Helicopter tours can be scheduled for before or after dinner reservations. Flights can be booked online for Saturday reservations between 3-8 pm and dinner reservations can be made by phone or online.

The patio sits on the tarmac of the historic terminal building, so it is not uncommon for planes to saunter up to the front door of the restaurant. Due to the otherworldly experience of having a plane land next to you while you eat lunch, the patio was recently expanded to accommodate more guests for dining or events. Between the tarmac, Dining Room, Cora’s Lounge, and the Earhart Room, there is more than enough to explore when you embark on your first journey to Holman’s Table.