“Floyd’s” Boldly Turns the Tables on Gender at the Guthrie 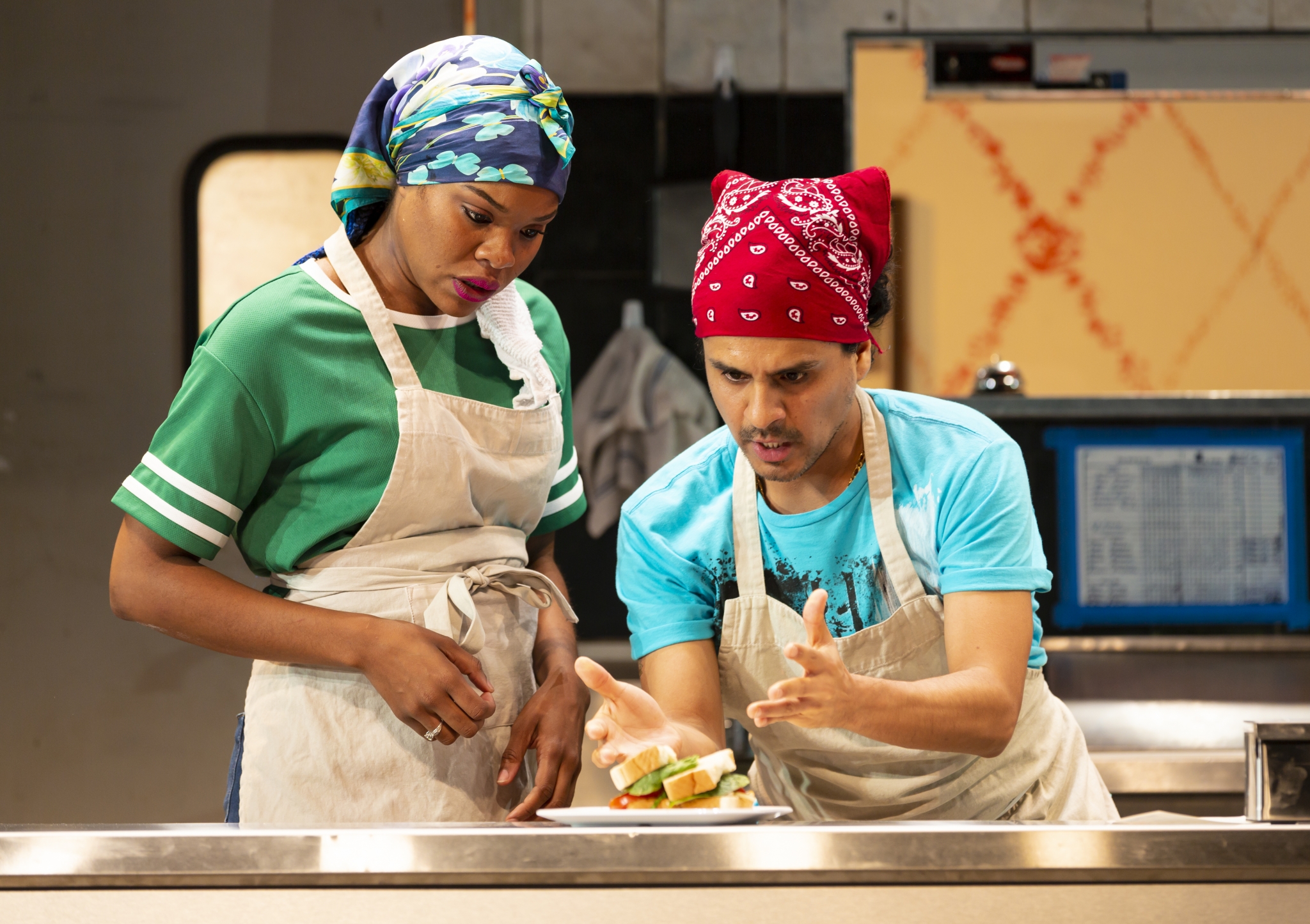 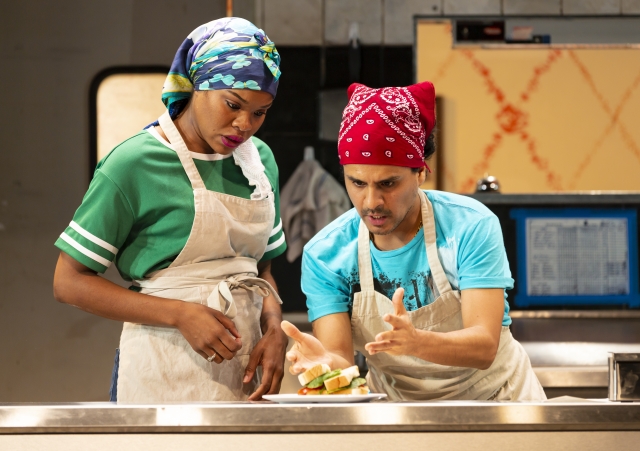 Women command the proscenium stage in Floyd’s, Lynn Nottage’s new play commissioned by the Guthrie Theater. The spirit in which the female characters do this may actually be what makes this play talked about centuries from now. Seriously.

Protagonist Floyd (Johanna Day), a white woman, runs a sandwich shop at truck stop. Her kitchen help are ex-convicts who have been unable to find employment because of their criminal past. It amounts to indentured servitude as they live under the suffocating assumption that they’ve no other options. With a psychically sadistic edge, Floyd rubs that in their faces and even violates physical boundaries in ways that frankly are illegal. But she has the power to shame, humiliate, degrade and fire. Therefore the rest, being desperate and seen as second-class citizens or lower, cower in fear of losing their jobs and never being hired anywhere again. This is the USA present day, by the way.
This visceral production makes the audience actually feel that suffocation. For these characters, Floyd’s is essentially their only stab at security, albeit tyrannical and meager. And as for a bright future? Forget it. Nottage makes it painfully clear that the systemic way former criminals are stigmatized is too often an excuse to marginalize them. Real forgiveness is actually seen as a threat to social order run by fear.
Floyd’s is fueled by the idea of the art of delicious sandwich-making. It’s the one thing that brings joy to the workers, though not to Floyd herself, whose disinterest in improving on her signature product is quite curious. Despite her negative attitude, it’s also an idea that amazingly has been pretty much anchored in the kitchen by Floyd’s own personal favorite employee, Montrellous (John Earl Jelks), a man of color, whose sandwiches are the most delicious of all. In fact, Montrellous is the only person, male or female, who the exploitative Floyd treats with any trace of respect. His upbeat, creative attitude and his ability to rise above all pettiness, is not only appreciated by the workers, but it bonds them.
This bonding is something that’s needed in order to sustain any hope of harmony in the kitchen, and by extension, keeping the business viable. Letitia (Dame Jasmine Hughes) and Rafael (Reza Salazar), both workers of color, intensely dislike Jason, a white worker, whose tattoos signify white power extremism. Unfortunately, in the Guthrie auditorium, midway up the slope of seats, it’s difficult to discern specifics on the many tats on actor Andrew Veenstra, even though they’re all over the part of his body exposed by his costume. Nonetheless, we get the idea.
Nottage’s text is written with a mix of dialogue and monologues at jackhammer pace, mixed with moments of thoughtfulness at varying levels. Director Kate Whoriskey’s cast glories in that with dynamic reactive flourish. Day serves the text just as it is meant to be with a monstrously intimidating title role turn. She puts every character on stage, except for Montrellous, on edge. Hers is a brazen performance reminiscent of the irreverent stand-up comedy of Lisa Lampanelli.
Hughes and Salazar beautifully mine a relationship where Letitia’s damaged self-esteem is her own worst enemy. She fails to see how her strident approach to life takes her out of civil communication, much less, intimacy and nuance. Rafael, a man more sensitive than he himself realizes he is, is en route to becoming a casualty of her emotional blindness. You’ll have to see this beguiling production to find out if he becomes that or not.
Veenstra makes an unlikable character not only understandable, but intriguing. We wonder to what degree prison life compels white males to take on white separatist ideas. One suspects he actually has not internalized such notions. The endearing Jelks is like a balm that soothes the rocky interplay of these damaged souls. He maneuvers through the production with blessed grace—a humanizing energetic force.
Paradoxically, Floyd herself, aside from being corrupt and abusive, is a mysterious figure, whose financial backing for the cafe is of a silent partnership nature and of which little is revealed in the course of the play. It echoes conspiracy theories and non-transparency, two concepts very much afoot in our time.
Floyd’s, like Nottage’s previous play, Sweat—Pulitzer Prize-winner for Drama, 2017—is set in Pennsylvania away from the major cities. She won the same prize in 2009 for Ruined, a jolting view of exploitation suffered by African women. Nottage’s comedy, By the Way, Meet Vera Stark, produced by Penumbra Theatre in 2015 and the drama, Intimate Apparel, produced by the Guthrie in 2005, provide evidence that she may well be the best American playwright of this century so far.
Note: You don’t have to have seen Sweat to understand and enjoy, if not relish, Floyd’s. However, Sweat will be produced by the Guthrie next year.
Floyd’s
Through Aug. 31
Guthrie Theater, 818 Second Ave. S., Minneapolis
(612) 377-2224
www.githrietheater.org